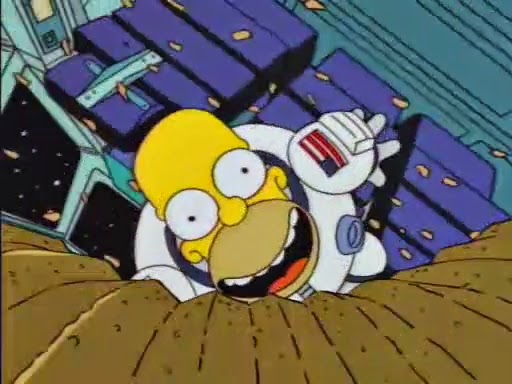 Or the One Where
Homer becomes an astronaut.

The Setup
Angry at suffering through another boring space shuttle launch on TV and feeling disrespected after being passed over for a union-mandated "Worker of the Week" award by an inanimate carbon rod, Homer calls NASA to complain, just as NASA is looking for an average Joe to send into space to boost ratings.

Notable Notes
This episode was written by David Mirkin, who was the show's executive producer at the time. It is his only writing credit on the series.

The idea of NASA sending Homer into space in order to court public opinion in the space program was inspired in part by the Teacher in Space program, which was aborted after the Challenger disaster.

Buzz Aldrin and James Taylor guest star as themselves in this episode, and it represents my first encounter with Taylor's music. To this day, I think of this episode whenever I hear "You've Got a Friend".

In a snapshot of the times, parodies of Married...with Children and Home Improvement constitute the most popular personalities on television, or "TV".

According to Wikipedia, a copy of this episode is available to view aboard the International Space Station.

This episode is also the source of the Overlord meme, sparked by Kent Brockman's quick acceptance that the loose ants aboard the shuttle mean that humanity is now controlled by insect overlords. 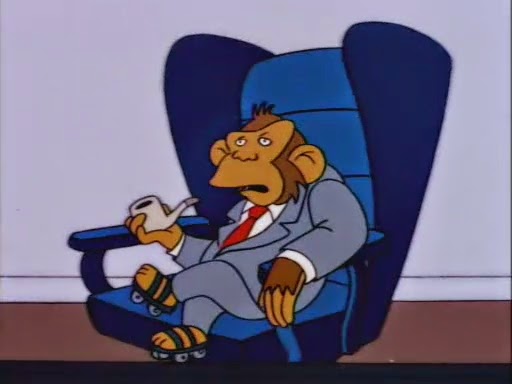 Quotable Quotes
Mr. Burns: Compadres, it is imperative that we crush the freedom fighters before the start of the rainy season. And remember, a shiny new donkey for whoever brings me the head of Colonel Montoya. Hmm? What? Oh, and by that I mean, of course, it's time for the "Worker of the Week Award"!

Stillwater: People, we're in danger of losing our funding. America isn't interested in space exploration anymore.
Babcock: Maybe we should finally tell them the big secret, that all the chimps we sent into space came back super intelligent.
Chimp: No, I don't think we'll be telling them that.

Reporter: Don't you think there is an inherent danger in sending unqualified, under trained civilians into space?
Homer: I'll field this one. The only danger is if they send us to that terrible Planet of the Apes. Wait a minute... statue of liberty... that was our planet. You maniacs, you blew it up! Damn you! Damn you all to hell!

Stillwater: Gentlemen, you've both worked very hard. And in a way, you're both winners.  But in another, more accurate, way, Barney is the winner.

Kent Brockman: Ladies and gentlemen, uh, we've just lost the picture, but what we've seen speaks for itself. The Corvair spacecraft has apparently been taken over, 'conquered' if you will, by a master race of giant space ants. It's difficult to tell from this vantage point whether they will consume the captive Earthmen or merely enslave them. But, one thing is for certain: there is no stopping them; the ants will soon be here. And I, for one, welcome our new insect overlords. I'd like to remind them as a trusted TV personality, I can be helpful in rounding up others to toil in their underground sugar caves. 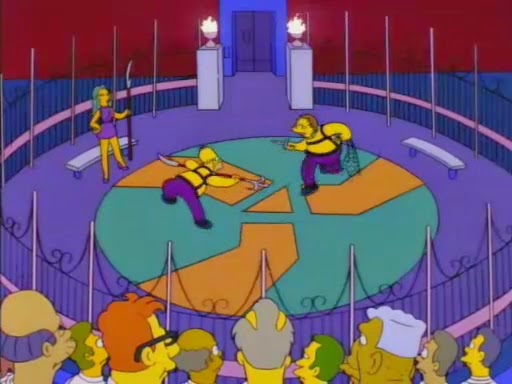 Teebore's Take
On paper, the premise of this episode is ridiculous, the kind of thing that, if it happened in a later season, would be pointed to as an example of the kind of whacky, outlandish things the show does in its twilight years. For all the crazy things the Simpson family has done through the years, Homer becoming an astronaut and going into space, something only the smallest fraction of people have done in the real world, is arguably the craziest. Yet, this episode not only works, it's widely considered one of the series' all time best. Part of that is because the plot provides a specific reason for Homer going into space: it's BECAUSE he's an average Joe that he gets selected by NASA, because NASA is hoping to restore precious ratings to their spaceship launches by appealing to the Joe Six Pack's of the world (that Homer, of all the average Americans out there, is selected, can be chalked up to the rules of TV reality).

It also works because Homer is given a character arc for the episode: he's searching for respect, from his family and peers, in the wake of an inanimate carbon rod being chosen for the Worker of the Week award over him, and he believes going into space will earn him that respect. That's the thing that separates this episode, outlandish premise and all, from so many equally outlandish episodes later in the show's history: there's a plot and character reason for Homer going into space. It's not being done just as an excuse to tell a bunch of jokes about the space program. But there are plenty of jokes, funny ones to boot, about the space program, nevertheless. Succeed at all three, plot, character and humor, and it doesn't matter how zany the premise is.

Simply put, one of the show's all time great episodes. It takes a ridiculous premise on paper and sells the hell out of it. 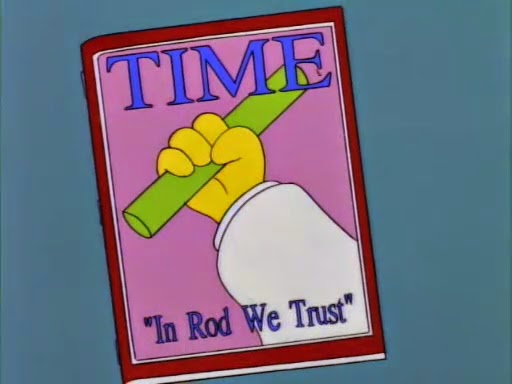