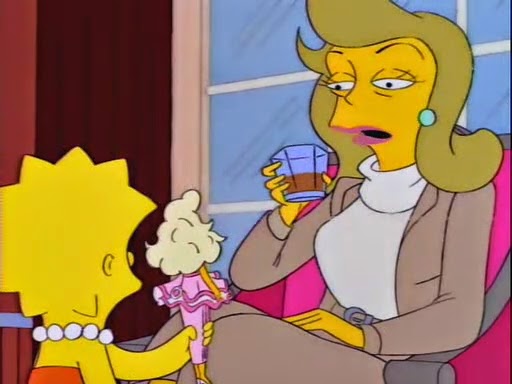 Or the One Where
Lisa teams up with the creator of Malibu Stacy to create a new, more female-empowering, doll.

The Setup
Confronted by his own mortality, Grampa decides to give the family their inheritance earlier, prompting a speedy trip to the mall. There, Lisa is excited by the new talking Malibu Stacy doll, until she actually hears it speak. Incensed by the blatant sexism spouted by the doll, she vows to seek out Malibu Stacy's creator.

One of her former husbands is said to be Doctor Colossus; he'll show up in a later episode.

This episode was inspired in part by the Teen Talk Barbie of 1992. Amongst its many possible phrases was the line "math class is tough", which drew the ire of American Association of University Woman and sparked a minor controversy at the time.

Smithers' homosexuality (or, at least, his love for Mr. Burns) gets another big winking hint in this episode, as Smithers is said to own the world's biggest Malibu Stacy collection, and we see that his Mr. Burns screen saver assures Smithers that he's quite good at turning him on.

At the toy store, Homer dances on/plays a giant keyboard on the floor a la Big. 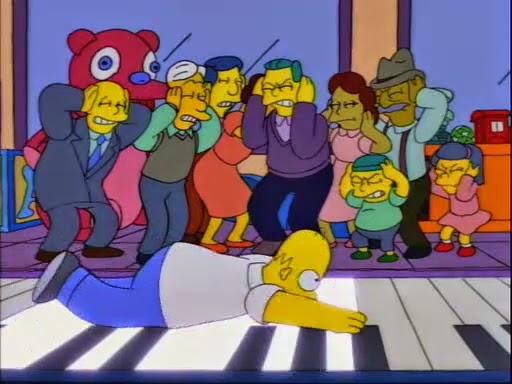 Quotable Quotes
Lisa: Come on, Stacy. I've waited my whole life to hear you speak. Don't you have anything relevant to say?
Malibu Stacy: Don't ask me, I'm just a girl!
Bart: Right on!  Say it, sister.
Lisa: It's not funny, Bart. Millions of girls will grow up thinking that this is the right way to act -- that they can never be more than vacuous ninnies whose only goal is to look pretty, land a rich husband, and spend all day on the phone with their equally vacuous friends talking about how damn terrific it is to look pretty and have a rich husband!
Bart: ... just what I was going to say.

Malibu Stacy: Let's buy makeup so the boys will like us!
Lisa: Don't you people see anything wrong what Malibu Stacy says?
Celeste: There's something wrong with what my Stacy says.
Malibu Stacy: My Spidey sense is tingling -- anybody call for a web-slinger?
Lisa: No, Celeste. I mean, the things she says are sexist.
Girls: Lisa said a dirty word!

Tour Guide: Well, that's the tour. If you have any questions, I'd be happy to answer --
Lisa: I have one.
Tour Guide: Yes?
Lisa: Is the remarkably sexist drivel spouted by Malibu Stacy intentional, or is it just a horrible mistake?
Tour Guide: Believe me, we're very mindful of such concerns.
Executive: Hey Jiggles, grab a pad and back that gorgeous butt in here.
Tour Guide: [laughs] Oh, get away, you.
Executive: Aw, don't act like you don't like it.

Joe: Stacy, please, I must have you back. Just come for a ride with me in my Mobile Command Unit.
Stacy: Joe, I told you, it's over. Release me from your Kung-Fu Grip! 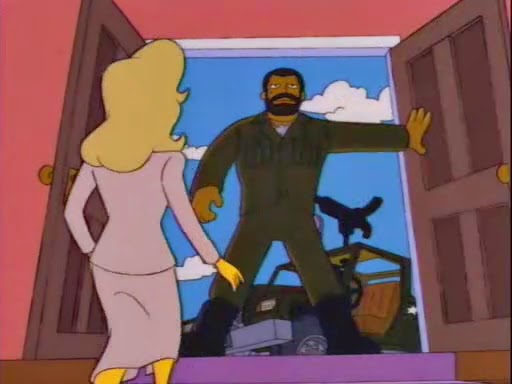 Teebore's Take
As has been mentioned before, though season five marks but 1/5th of the show's current life, five seasons nonetheless is a fairly long time in the life of a TV series, and it's not uncommon to see new aspects of characters come to life around that time. To wit, this is the episode I always associate as the beginning of Lisa's feminism as a recurring character trait. Certainly, there's been mention of it before, but previously her defining characteristics have been "the sensitive/smart one" and "the crusading one". This episode, which specifically focuses her crusading energy on the creation of a better doll to serve as a role model for young girls, marks the beginning of a new role for the character, one which, like her future vegatarianism, will become an ingrained part of her characterization moving forward, to the benefit of the character and the series.

Of course, because Lisa is the star of a TV show (or, at least, 1/5th of a star), she gets much further along in her goal of creating, manufacturing and releasing a new doll than your average eight year old girl might, but the ending of this episode is classic Simpsons in the way it balances Lisa's earnestness and hope with a more cyncial realism. Though her Lisa Lionheart doll is easily eclipsed by Malibu Stacy's new hat (a hilarious acknowledgement of the collector mentality and the inherent difficulty in saving people from themselves), Lisa asserts that if even one girl gets her message, the whole thing will be a success. To which Stacy dryly adds, only if said girl pays $46,000 for her doll. Hopeful yet cynical, that is The Simpsons at its best.

Lisa's crusading spirit finds a new target in an episode that manages to be uplifting and cynical at the same time. Not an all time great, but solid nonetheless. 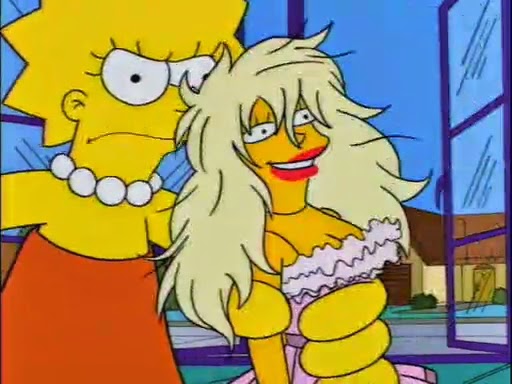