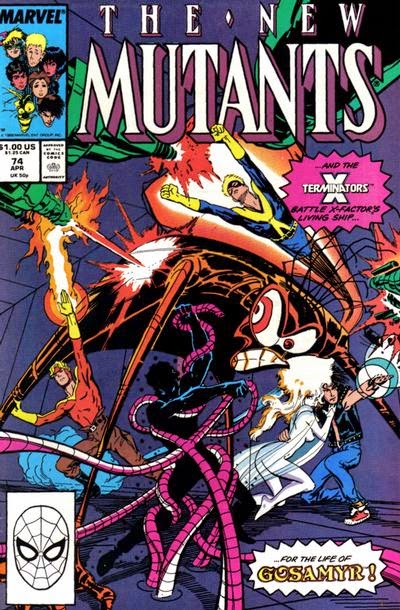 In a Nutshell
In the wake of "Inferno", Gosamyr leaves the team.

Plot
Cannonball, Rusty and Skids fly through the streets of Manhattan, mopping up the lingering effects of the Inferno, while Rictor, Wolfsbane and Boom-Boom tend to the rescued mutant babies at the church. Shortly thereafter, Mirage, Warlock, Gosamyr and Sunspot return from their own clean-up mission. Meanwhile, at the Hellfire Club, Shaw and Magneto come to blows over their respective outlooks on the future of mutantkind. Elsewhere, the X-Terminators take the New Mutants and the rescued babies to Ship, who scans each of them as they enter. He freaks out upon scanning Gosamyr, and imprisons her in a containment unit, prompting both teams of young mutants to attack Ship in order to free her. Working together, Sunspot and Rictor manage to free Gosamyr, but she ends the confrontation, telling them Ship understands better than they do just how dangerous her race is. 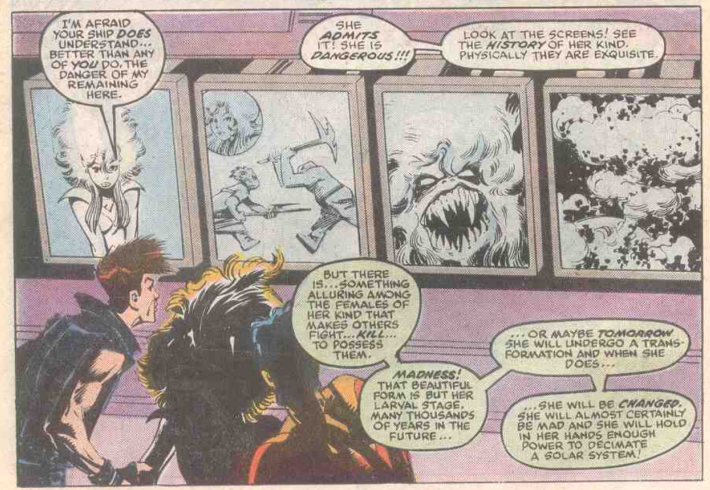 Just then, Dani collapses, overwhelmed by visions of death. Believing her presence is the cause of them and combined with Ship's fear, Gosamyr agrees to leave Earth. Saying she's learned from Illyana's sacrifice that she wants to be a constructive force in the universe, Ship tells her of a planet of mystics who reportedly have helped others of her kind to control their innate abilities. Thanking Roberto for teaching her what love is all about, she says her goodbyes and departs in a solo vessel created by Ship. Back at the Hellfire Club, Magneto and the White Queen are discussing Shaw when Selene enters, telling them something is happening at Xavier's school. Meanwhile, the New Mutants depart Ship, having decided to leave the school but determined to explain their position to Magneto like adults. However, as they reach the grounds, they're greeted by a shocking sight.

Firsts and Other Notables
In the wake of seeing Magneto seemingly conspiring with N'astirh last issue, along with the long-simmering tensions between the students and their headmaster, and upon seeing the X-Terminators' setup aboard Ship, the New Mutants agree this issue to formally resign from Xavier's school, though the immediate fallout of that decision is held for next issue. 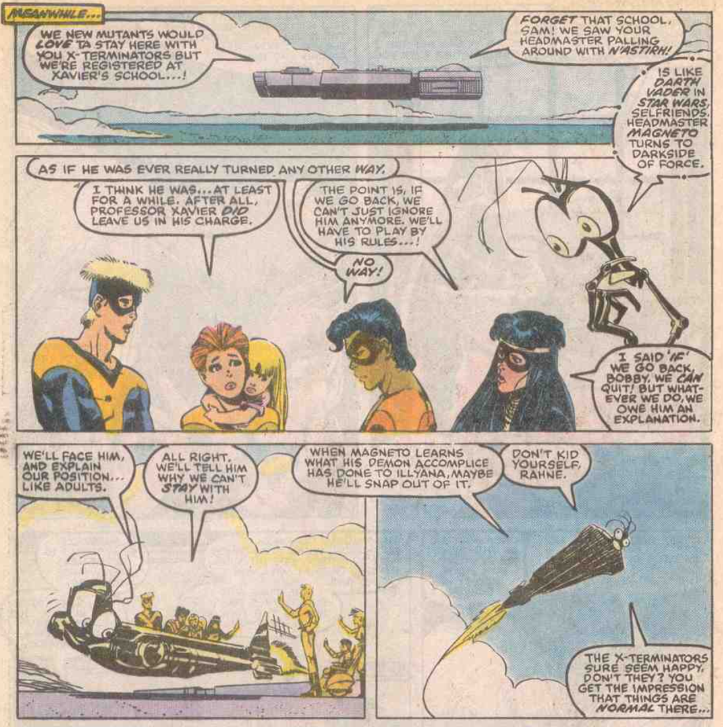 Gosamyr leaves the team as of this issue, ending her short tenure as one of the New Mutants. Convinced in part by Dani's ongoing death visions and by Ship, who considers her race even more dangerous than that of Warlock's, that she's too great a danger to those around her and all of Earth, she leaves to seek out a reported planet where a group of mystics have had luck helping her people control their natural conditions. Aside from an upcoming appearance in Cloak & Dagger #4, this, thankfully, is the last we'll see of her. 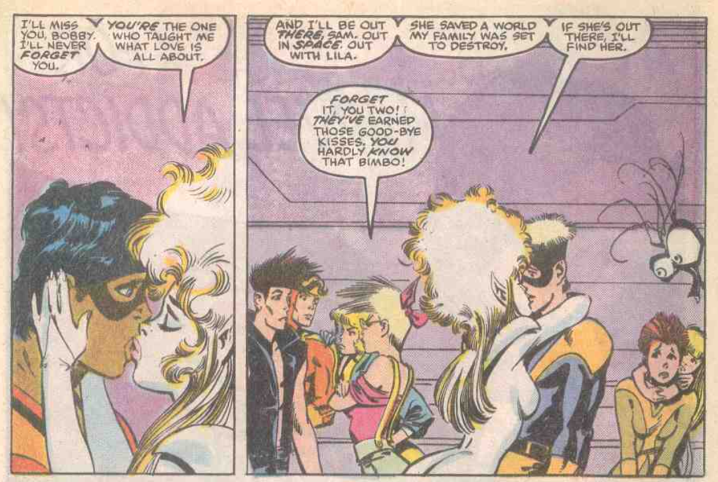 In the wake of "Inferno", Skids notes that it's a miracle more people weren't hurt (which doesn't quite gel with all the wounded we saw in Power Pack #44, but I suppose it always could have been worse, or that Skids doesn't have an accurate grasp of the casualities), and Cannonball says that many people are considering the events to have been some kind of dream, which more or less becomes the explanation for what the average citizen in the Marvel Universe considers "Inferno" to have been. 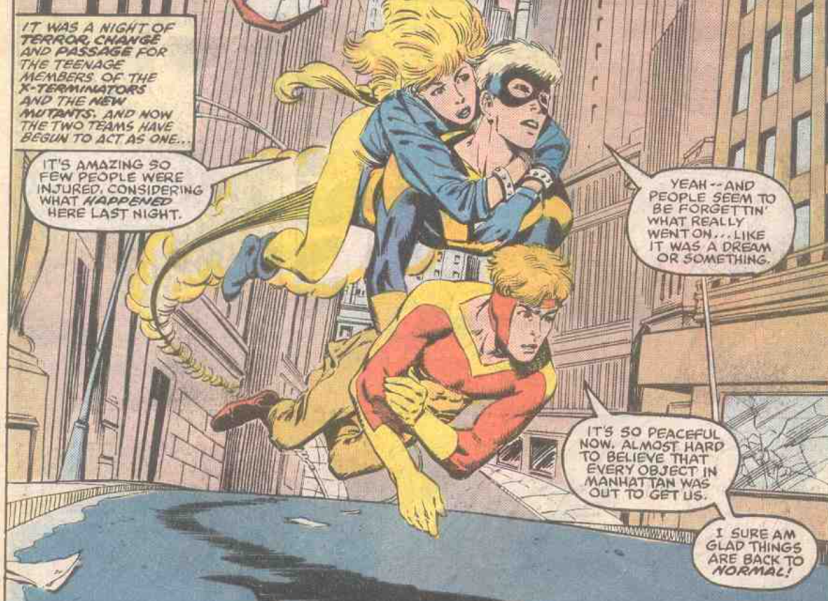 The rescued Inferno babies are brought to Ship by the New Mutants and the X-Terminators, which is where we'll see them next in X-Factor #40.

Simonson, always wanting to leave a door open for the return of a dead character, offers up via Rahne a possible explanation for Lila's survival following the events of issue #70, something which seems to bring some comfort to Sam. It's never actually made explicit how Lila survived when next she appears, but Rahne's explanation is as good as any. 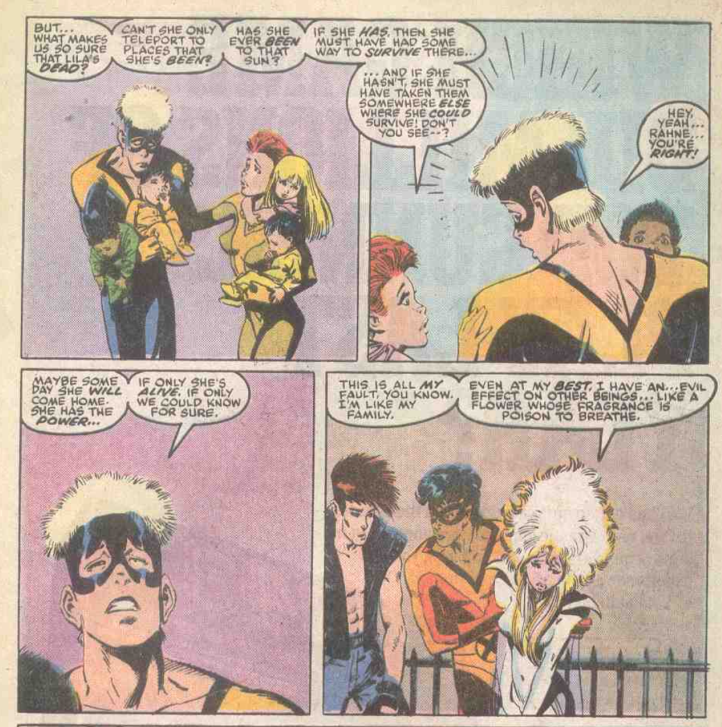 Though kept a secret in this issue, the event Selene refers to at Xavier's school and the shocking sight that greets the New Mutants when they arrive there is known to anyone who read X-Men #243: the mansion has been destroyed, which readers of this title will learn of next issue.

The Chronology Corner
The New Mutants' appearances in Cloak and Dagger #4 and Power Pack #44 take place between last issue and this one.

A Work in Progress
A few demonically-possessed objects remain, but they revert to normal with limited effort.

The New Mutants meet Ship for the first time this issue.

Despite the end of "Inferno", Dani is still suffering a headache and seeing visions of death everywhere. Magneto and Shaw continue to squabble, with Shaw declaring that Magneto is responsible for the damage caused by the demons for failing to control Illyana, while Magneto is upset Shaw cares only about profit and not the well being of mutantkind. Shaw also notes that with the death of the X-Men and the depowering of Illyana (the most powerful of the New Mutants), Magneto no longer brings as much influence to the Inner Circle as he once did. 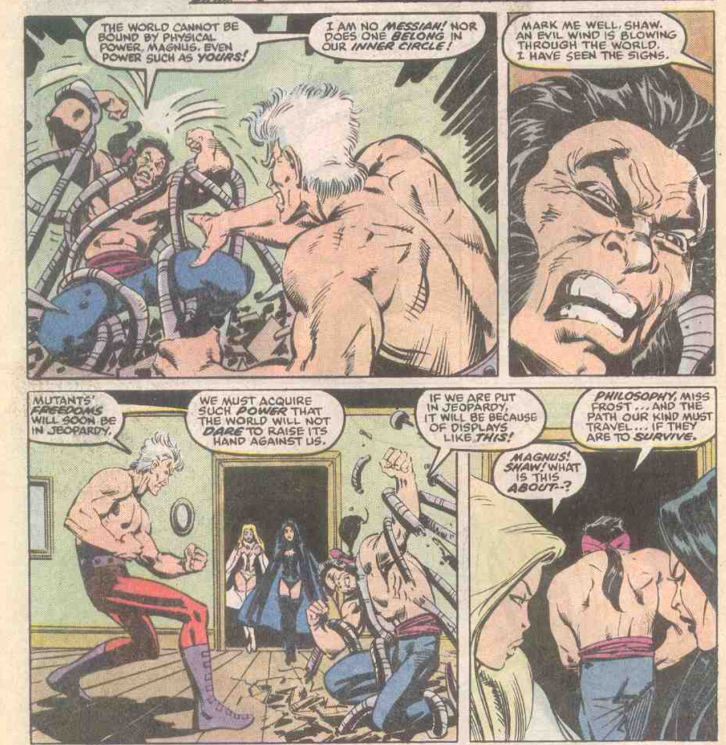 As a horrified Ship scans Warlock, we're reminded that Warlock is considered a mutant because he lacks his race's evil urges and possess a desire for friendship. 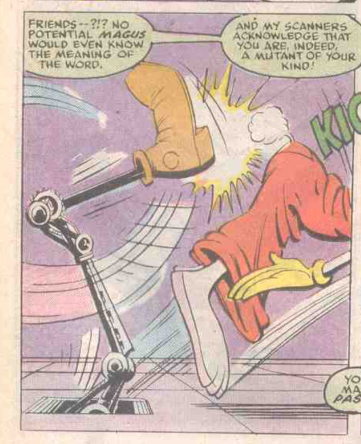 I Love the 80s
Warlock transforms into Roger Rabbit. 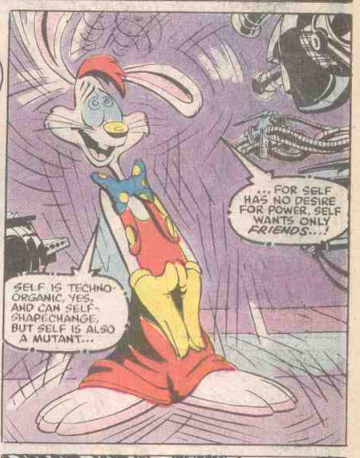 Teebore's Take
Not quite a post-crossover "Classic Claremont Quiet Issue", this issue nonetheless addresses the fallout from "Inferno" while transitioning the New Mutants into their new status quo. Between those two things, the chief task of this issue is the writing-out of Gosamyr. While I'm certainly not going to complain about her disappearance from the book, and I can't complain about the way it was handled (I frankly appreciate the obviousness of it, the vague handwaving-ness of "oh, here's a planet you can go to that might help, just be gone already"; it's barely one step up from "Poochie died on the way back to his home planet"), one does have to wonder, in the wake of her departure from the series, what the point of the character was in the first place?

As interminably long and dull as her introductory story was, she at least served a purpose in it. After that, she returned to Earth with the New Mutants, hung around in the background during "Inferno" (outside of her appearance in Power Pack #44, she did absolutely nothing of note in the preceding three months) and then was sent packing this issue. Clearly, Simonson had no long term plans for the character, so why even bother bringing her out of her initial storyline? Whatever the reasoning then, Gosamyr is gone for good now. And for that, we can all be thankful.

Next Issue
Tomorrow, the main narrative of "Inferno" comes to a close in X-Factor #39. Next week, the final batch of "Inferno" tie-ins, followed by Excalibur #7.
Newer Post Older Post Home
Posted by Austin Gorton at 12:00 PM