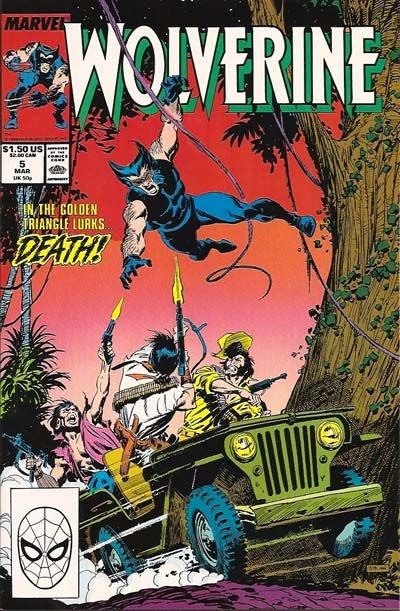 In a Nutshell
The gang war between Tyger Tiger and General Coy continues.

Plot
In Madripoor, Bloodsport notes Karma's bleeding hand, and when he tastes her blood, he tells her they are now bound together, til death and perhaps beyond. Meanwhile, Patch and Archie Corrigan are flying into the Golden Triangle, en route to General Coy's opium fields. Remembering his encounter with Bloodsport, Archie struggles with the idea of executing Patch, ultimately deciding he can't do it. Just then, their plane is attacked by an old fighter plane, but together, Archie and Patch manage to destroy it. Back in Lowtown, Jessica Drew and Lindsay McCabe bring the unconscious Tyger Tiger to the office of Landau, Luckman and Lake for safe keeping. In the Golden Triangle, Battleaxe and Shotgun, two mercenaries working for Coy, are ordered by Hardcase, their commander, to investigate the plane crash, just as Patch appears out of the mud. 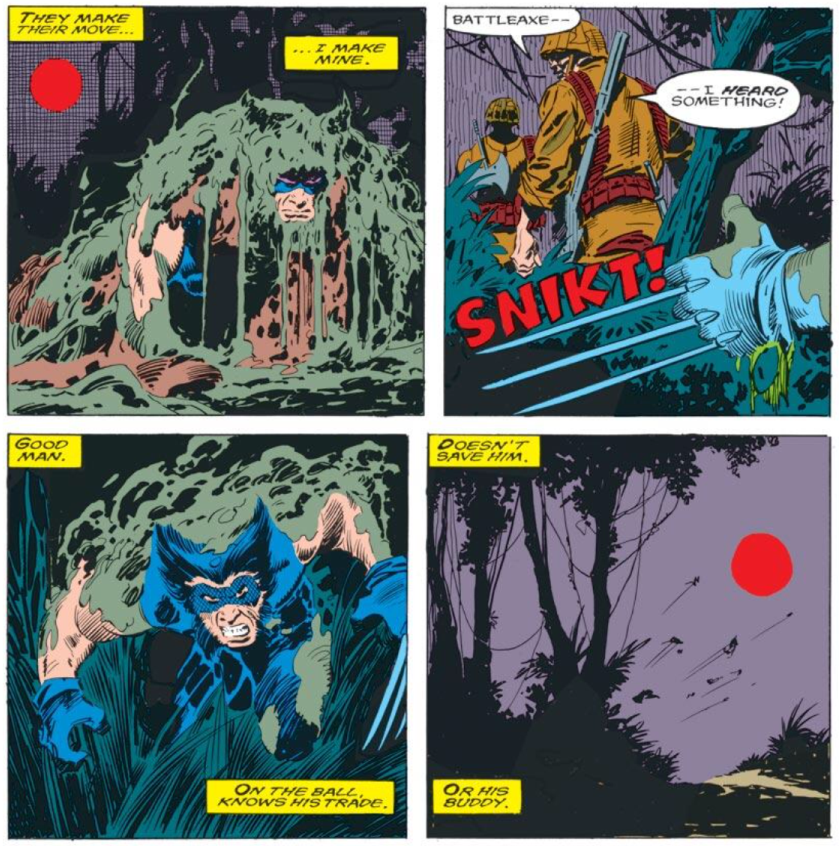 In Madripoor, Jessica is tending to Tyger when Jessica emerges from a back room wearing armor resembling Psylocke's. Just then, Roughhouse and Bloodsport burst through the wall. Back in the Golden Triangle, Patch captures Battleaxe and Shotgun, triggering their emergency signal to draw out Hardcase and Coy's troops. He then sneaks into the facility, creating an explosion and attacking the remaining guards, motivating them to try and escape with the opium. Outside the facility, he stops the truck loaded with the opium and tells them Madripoor is Tyger's turf. The troops shoot and seemingly kill him, but just then Archie flies overhead, firing a pair of Vulcan guns from his plane, destroying the truck and the opium. As morning breaks, Archie and Patch head back to Madripoor, with Patch noting that nothing they've done will matter if Tyger isn't still alive.

Firsts and Other Notables
This issue marks the first mention of Landau, Luckman and Lake, an interdimensional law firm/holding company run by a secret cabal determined to bring about heaven on Earth, and the first appearance of one of their offices in Madripoor and its local agent, Chang (who makes his first and only appearance this issue as well). LLL and its various agents will continue to play a periodic role in this series and others, usually on the fringes of the X-universe (most notably in Joe Kelly's Deadpool), and was named after the original owners of the Forbidden Planet comic book store (which appeared in previous Claremont-penned comics as well): Nick Landau, Mike Luckman and Mike Lake. 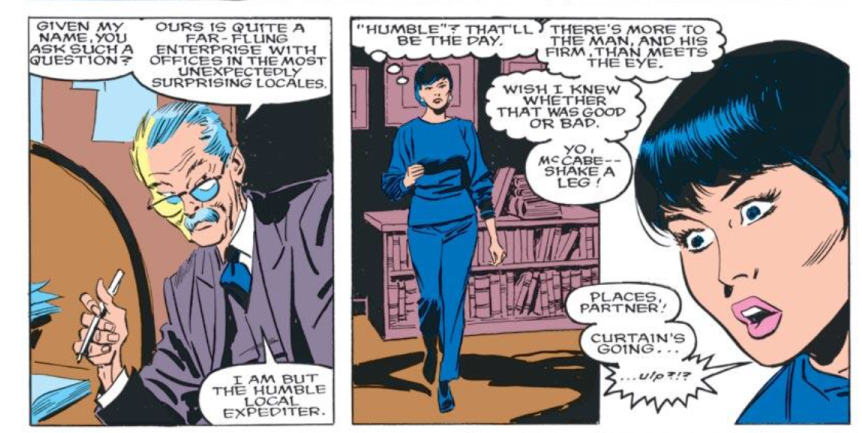 Hardcase and the Harriers also appear for the first time in this issue. A group of former SHIELD agents-turned-mercenaries, they are very reminiscent of a watered down GI Joe in their codenames and specific weapons of choice (ie Battleaxe, who uses a large battle...axe...). Specifically, we see Hardcase, the aformentioned Battleaxe and Shotgun (guess what his weapon of choice is?) in this issue. Claremont will use them again in a future issue of X-Men, where their roster will be greatly expanded and it will be revealed that they are working undercover against Coy for the DEA in this issue.

While at the LLL office, Lindsay emerges wearing a copy of Psylocke's armor. This has led some chronologists to place this story (and, as a result, the story which preceded it) as occurring before X-Men #232 (the first time we see Psylocke wearing the armor), the idea being this is her specific suit of armor that Lindsay is wearing, which Wolverine will later give to her. However, the text in this issue suggests it's a copy of Psylocke's armor (presumably to replace the armor damaged during "Inferno" and Psylocke's rematch with Sabretooth in X-Men #243), and the intent seems to be to show readers that Wolverine acquired the suits of armor for Psylocke through Landau, Luckman and Lake.

Cutting Edge, the series' letter column, debuts in this issue.

The back cover illustration is by John Bolton.

A Work in Progress
Operating in his Patch costume, Wolverine is back to wearing the strip of nylon across his eyes. 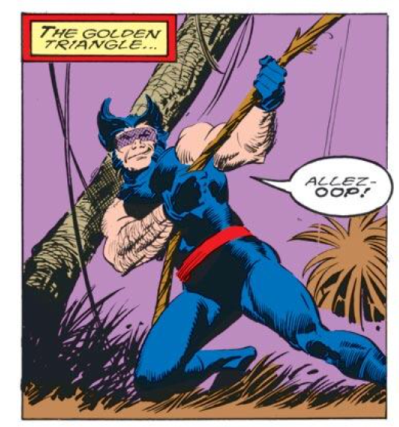 I Love the 80s
Wolverine openly lights up a cigar in one panel. 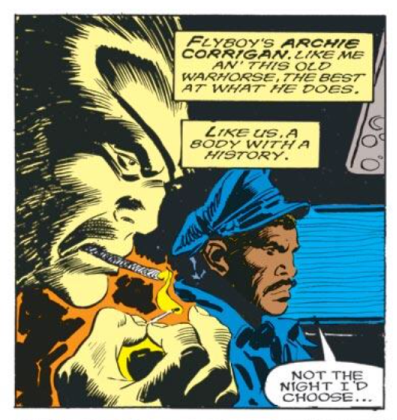 Claremontisms
Lots of the phrase "a body" being thrown around in this issue. And the Harriers are yet another name lifted from an airplane.

The Best There is at What He Does
Jessica spots a tintype featuring "Patch" and Chang on the wall of the LLL office, another indication of Wolverine's longer-than-normal age (and the quotes around "Patch" in Jessica's dialogue suggest she's well aware of Patch's true identity, particularly since he's patch-less in that image). 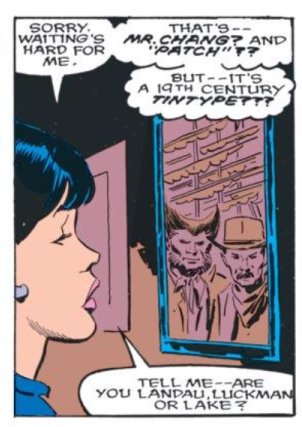 It's noted that Wolverine doesn't kill any of Coy's troops, and he says that it's harder to abandon a buddy who's still breathing than one who's dead. 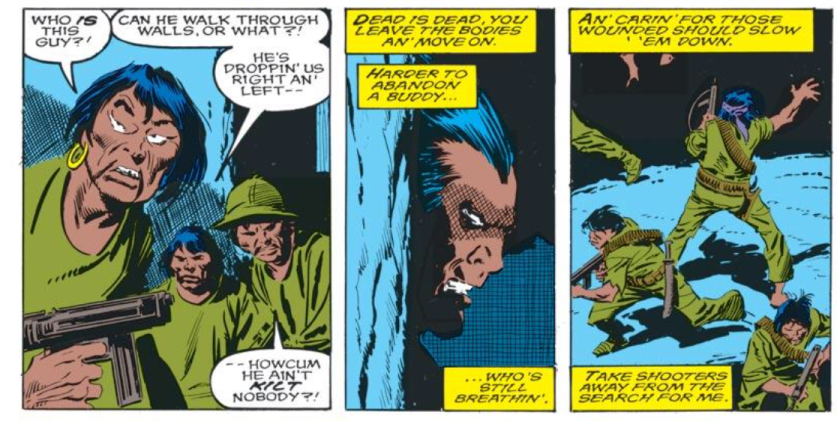 Teebore's Take
While continuing the storyline of the gang war between Tyger Tiger and General Coy begun last issue, this issue also continues the efforts to widen the world of Wolverine and create a distinct setting and supporting cast for the series. We meet the law firm of Landau, Luckman & Lake, for the first time, and learn they have a history with Wolverine, and in Hardcase and the Harriers we have potential new recurring villains to go along with Roughouse and Bloodscream (of course, ultimately, that turns out not to be the case). While the story continues to hit the baseline level of pleasant-enough superhero action adventure and little else, this continuing development of the world within the series makes it even more obvious that this story, rather than that ho-hum business with the Black Blade, should have been this series' initial story arc.