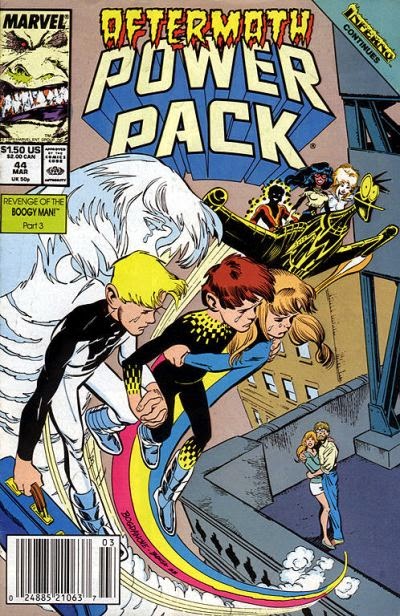 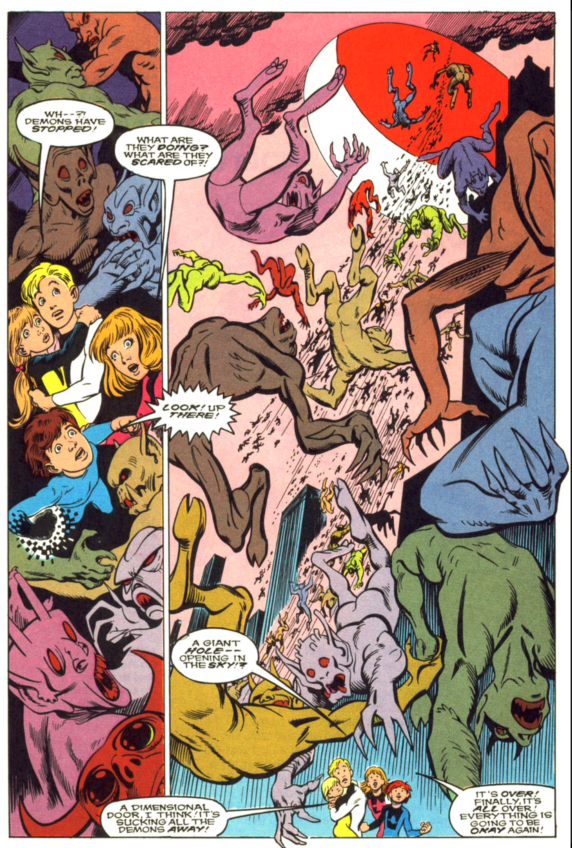 Returning home, they find their parents, who recently learned about Power Pack's life as superheroes, acting oddly. The next day, Power Pack helps clean up the city, running into the New Mutants at a local hospital and helping triage people wounded during the Inferno. Later, the New Mutants tell Power Pack about the demonic invasion, then take them home, where their parents are even more distraught than before. Working together, Mirage and Gosmayr convince the Power parents that their super-powered children were clones created for their own protection against Carmody while the New Mutants guarded their real, powerless children. Now that Carmody's threat is over, their "powerless" children can be returned safely to them, thus restoring Power Pack's secret identities and allowing their parents to rest easier.

Firsts and Other Notables
The New Mutants guest star in Power Pack #44 (at least, Mirage, Sunspot, Gosamyr and Warlock do), making that issue as a result the one out of this batch which ties in most directly to the larger "Inferno" story. In the course of the issue, Mirage and Gosamyr help Power Pack restore their secret identities, convincing their parents (who weren't taking it well) that they don't have superpowers after all. 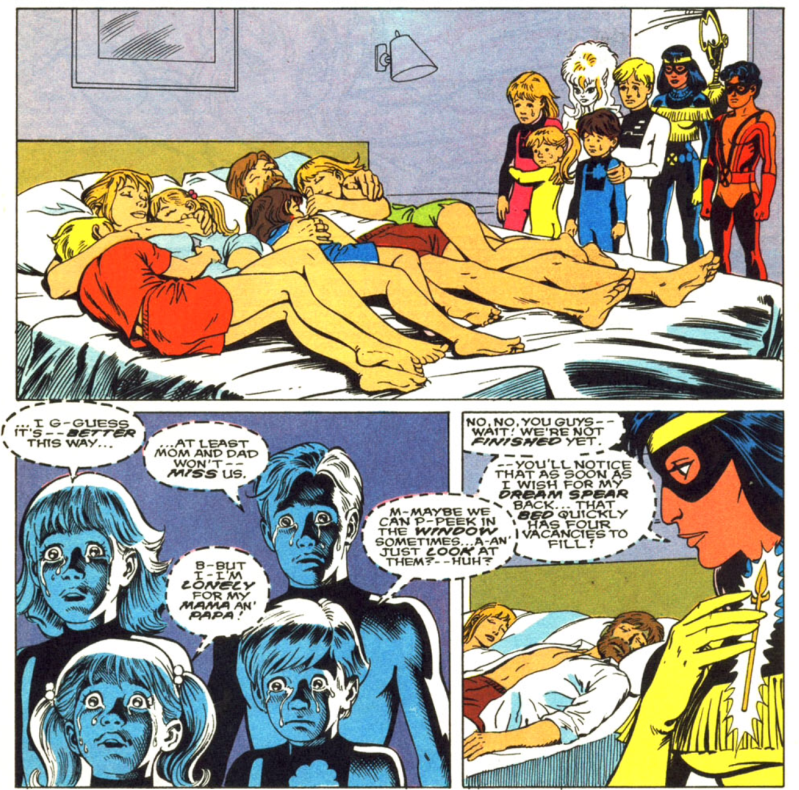 Oddly enough, we get possibly the best use of Gosamyr in Power Pack #44, as she uses her powers to essentially provide mental anesthetic to injured people, and later helps sell the whole "secret identity restoration" thing for Power Pack, which is more than she's ever done/will do in New Mutants. 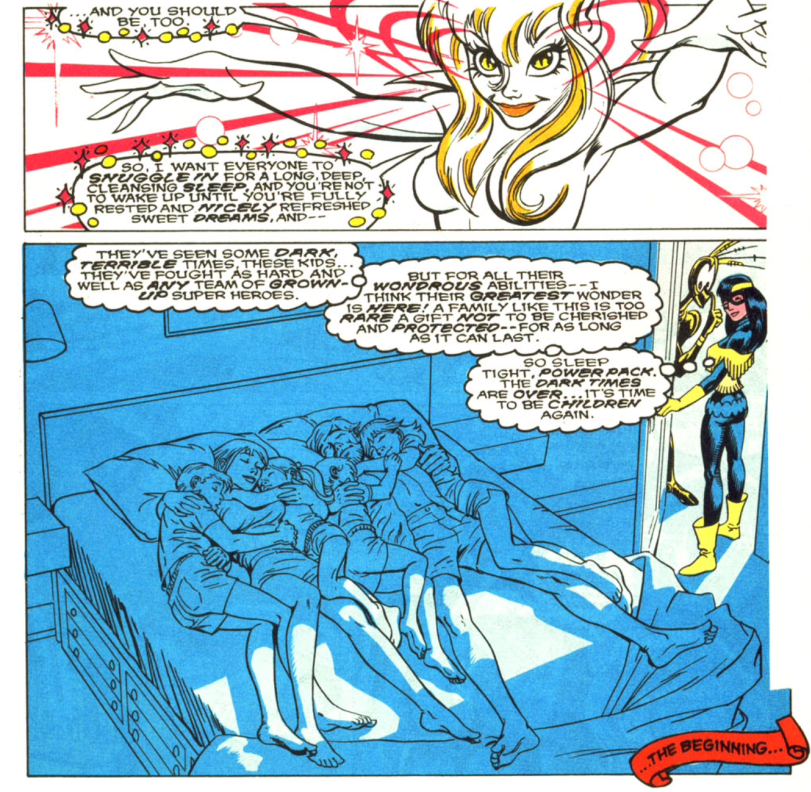 Power Pack is clearly in a state of creative flux when issue #44 hit the stands, as the writer, penciler and inker are all "special guests" (though the penciler, at least, is a former series artist).

We get our first full look at Hobgoblin-as-Demogoblin in Web of Spider-Man #48. 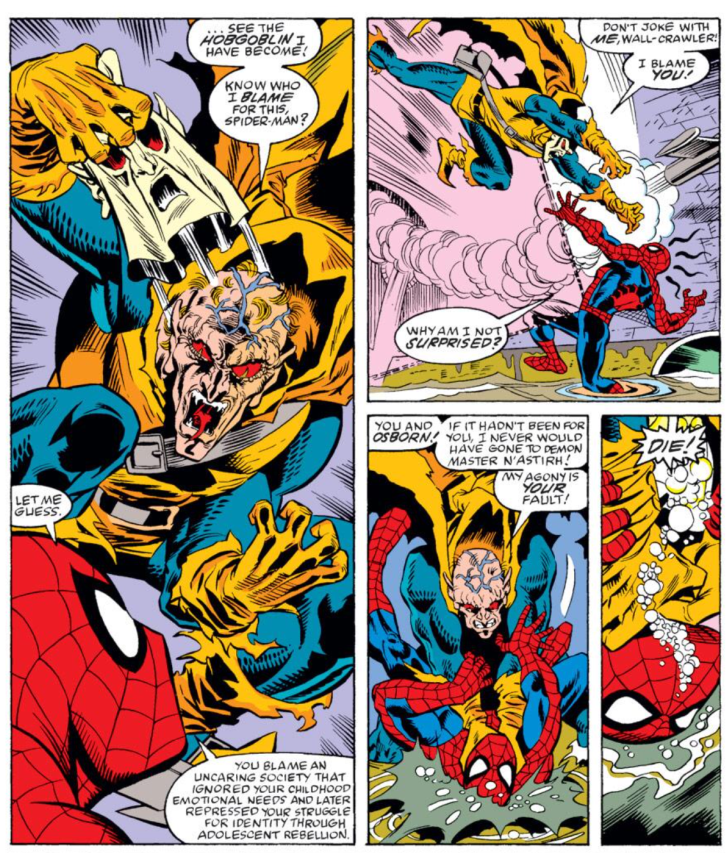 The Chronology Corner
N'astirh appears briefly in Fantastic Four #324, between his appearance in Excalibur #6 and New Mutants #73.

The New Mutants appear in Power Pack #44 after Cloak & Dagger #4, though that issue won't be on sale until next month.

A Work in Progress
In Fantastic Four #324, Kang notes that he's taking advantage of the disturbances caused by "Inferno" to operate independent of the Council of Cross Time Kangs, suggesting he is the original Kang.

Kingpin straight up cold cocks a demon in Web of Spider-Man #48; I just thought that was pretty cool. 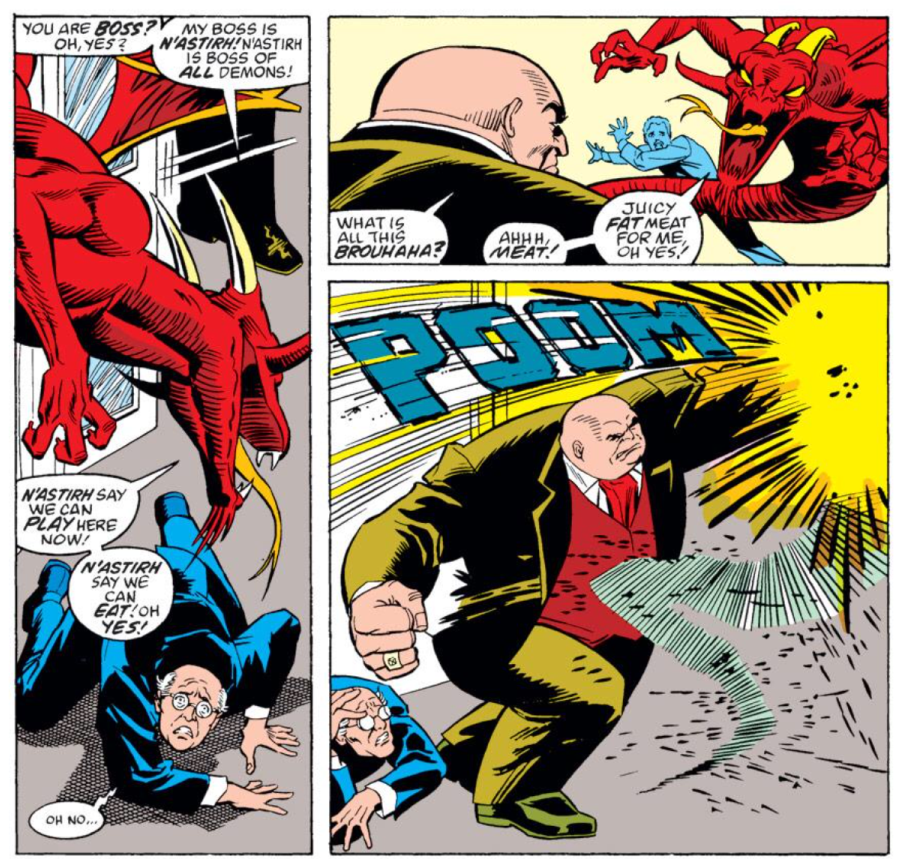 That issue ends with Spider-Man still in the dark as to the cause of the Inferno, as he rightly notes that it feels like he's on the fringes of a battle being fought by somebody else, the climax of which is coming soon. 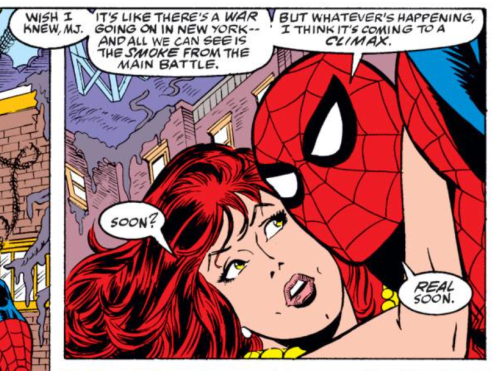 Power Pack witnesses the demons being called back to Limbo by Illyana in New Mutants #73.

Dani is able to create an entire army of doctors and construction workers to help out at a hospital, though she notes they'll have to use pre-existing supplies for fear things like bandages or whatnot would disappear once she calls up something else (Dani also says she's met the doctor before, but I can't for the life of me remember when or where, nor find a reference to it online). 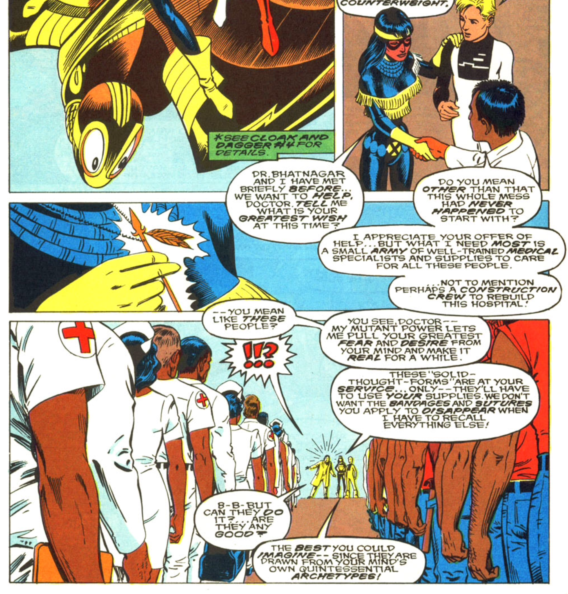 Unlike the rest of the characters involved in the tie-ins, Power Pack learns about what caused the demon invasion from the New Mutants.

Teebore's Take
With "Inferno" winding down in the X-titles, so too are the tie-in titles moving past the event. These issues represent the last "Inferno" tie-in issues of these specific series, and for the most part, they're just as indirectly connected to the events in the X-books as the previous tie-ins, with the characters continuing to be in the dark as to the cause of the Inferno (with Spider-Man essentially hanging a lampshade on this idea directly). Of this batch, Power Pack ties in most directly to the events of the crossover, thanks to the presence of characters actually involved in the front line action, but it's also probably the best issue of the batch (though the self-contained Flash/Betty demon attack in Spectacular Spider-Man is also pretty good, a creepy little tale that takes advantage of the atmosphere of "Inferno" more than anything).

Just as with the harrowing depiction of life inside Inferno-infected Manhattan in an earlier tie-in, Power Pack #44 stands out for being exceedingly dark and bleak, specifically in its depiction of the Power children's parents in the wake of learning their children are superheroes, as both essentially experience nervous breakdowns for different reasons (their mother mourns the loss of her "babies" while their father gets trapped in a logic loop as he tries to reconcile being a good father - who should shield children from harm - with being the father of superheroes - who must let his children encounter danger in their efforts to help people). The resultant reset button that restores Power Pack's secret likely angered fans of the series to whom the previous revelation felt like a significant moment, but the sheer mental despair exhibited by their parents is nonetheless an effectively creepy argument for its necessity, and, out of context of the series as a whole, makes for a memorable issue.

Next Issue
Tomorrow, Excalibur goes to New York as "Inferno" comes to Excalibur in Excalibur #6, followed by Wolverine #5 on Friday. Next week, the showdown with Mr. Sinister begins in Uncanny X-Men #243.
Newer Post Older Post Home
Posted by Austin Gorton at 12:00 PM