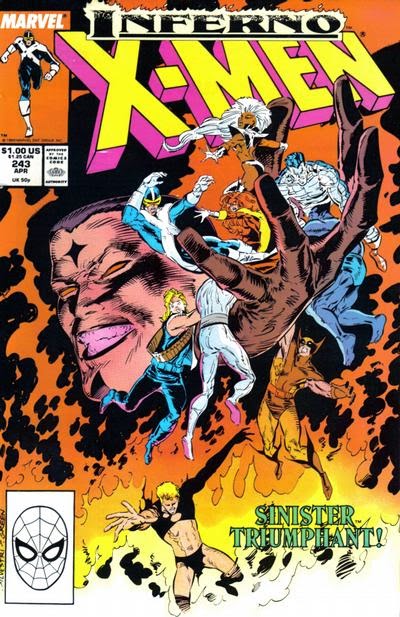 In a Nutshell
The X-Men and X-Factor track down Mr. Sinister at the X-Mansion.

Plot
At the Empire State Building, the X-Men and X-Factor are mourning the loss of Madelyne when Marvel Girl suddenly cries out in pain. Using the psipaths from when she established a telepathic rapport with her, Psylocke brings herself, Cyclops, Storm and Wolverine into Marvel Girl's mind, where they realize that she now shares memories with both Madelyne and Phoenix. Just then, an avatar of Mr. Sinister appears in Marvel Girl's mind as well, destroying her memories, determined to transform her into a blank state. As Psylocke momentarily fights him off, Storm, Wolverine and Cyclops urge the remnant of Madelyne's mind to help them fight back against the villain, her true tormentor. Agreeing, Madelyne lashes out, forcing Sinister out of Marvel Girl's mind. At the X-Mansion, Mr. Sinister wakes up, telling Polaris they're about to have company. 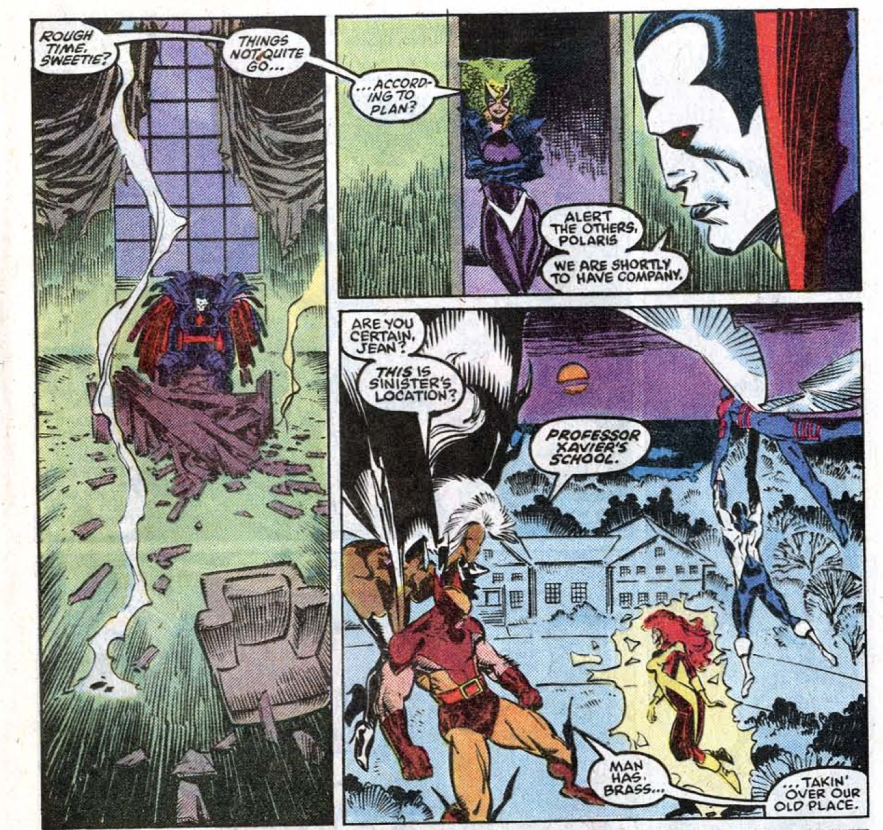 Outside, a contingent of X-Men and X-Factor arrive. Splitting up, the two teams penetrate the mansion from various entry points. Meanwhile, Beast and Longshot bring Marvel Girl's parents and baby Christopher to Ship, but when Beast prepares to rejoin their teammates, Longshot is hesitant, worried the changes wrought on him by N'astirh will force him to betray his teammates. Back at the mansion, the combined teams are attacked by the remnants of the Marauders, but they're easily overpowered and Malice is captured. Unwilling to give up information on Sinister, Psylocke prepares to separate Malice from Polaris, an act Malice insists will kill them both. Just then, the mansion explodes. In the wake of the explosion, Mr. Sinister picks through the rubble, claiming Jean Grey and telling Malice to destroy the rest of the unconscious mutants. However, one person still stands in their way: Longshot.

Firsts and Other Notables
This issue, the X-Mansion is destroyed for the second time (following the Sidri attack which destroyed it in issue #154, prompting the X-Men's short-lived relocation to Magneto's former island base in the Bermuda Triangle). Last seen in issue #221 (just before the X-Men leave for San Fransisco, which carried them into "Fall of the Mutants" and then into their new Australian locale), it will stay destroyed much longer this time; though it will eventually be revealed that the sub-basement levels (including the Danger Room) remain intact, allowing the future Cable-led New Mutants to use those levels as a headquarters for a time, the structure itself and the mansion's role as a full-time base of operations for the X-Men won't return until issue #281, after Claremont has left the title. 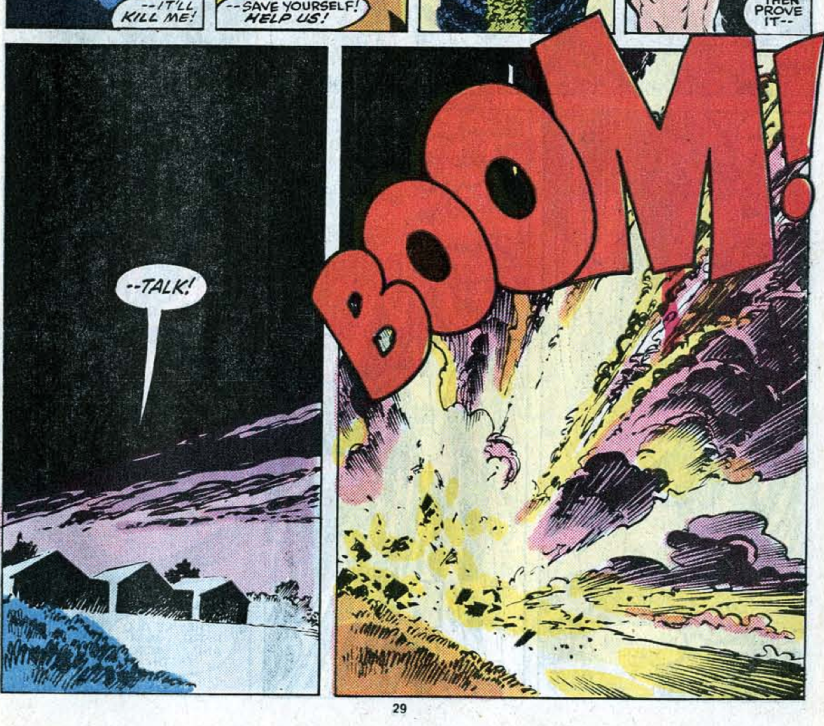 This issue establishes that the memories of Madelyne and Phoenix now reside in Jean Grey's mind, along with remnant's of their consciousnesses, with Madelyne deciding to help the X-Men and X-Factor by sharing what she knows of Mr. Sinister and lashing out at him as he tries to destroy Jean's mind. 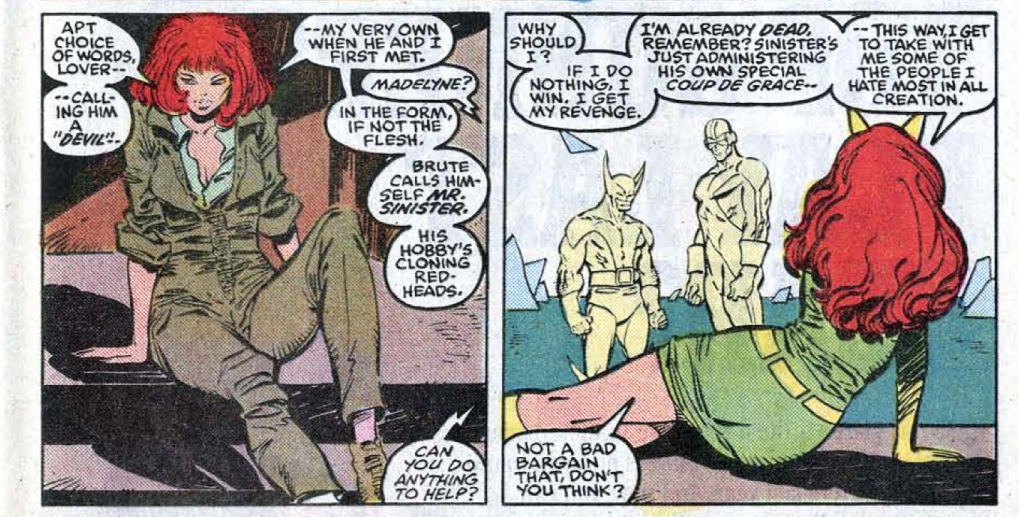 The opening page of this issue declares it to be a celebration of the twenty-fifth anniversary of the X-Men (roughly - it had actually been a little more than 25 years by a few months when this issue went on sale), and the 150th issue since the launch of the "All New, All Different X-Men" in issue #94.

In a brief encounter, Psylocke and Sabretooth reprise their battle from issue #213, continuing the somewhat understated rivalry between the two that will be referenced again in the future. 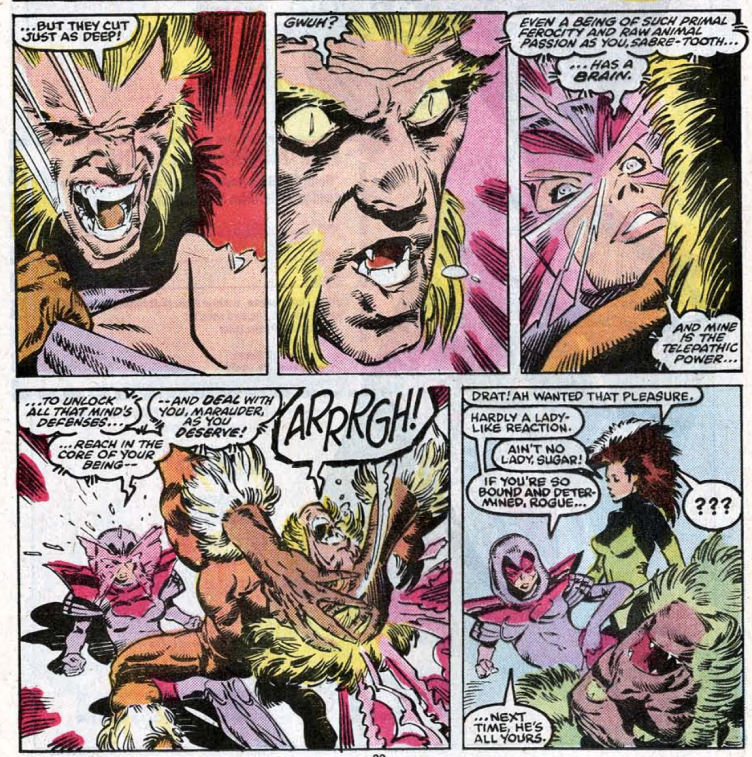 We can assume from this issue that the only Marauders to survive their encounter with the X-Men in issues #240-241 (and not yet be re-cloned) are Sabretooth and Malice (and maybe Blockbuster, who definitely does die again this issue).

The cover of this issue is another iconic, oft-homaged cover.

The Chronology Corner
This issue leads directly into X-Factor #39, where the X-Men/X-Factor portion of "Inferno" concludes. As such, this is the last issue of the series to carry the "Inferno" label.

A Work in Progress
As in X-Factor #38, the X-Men's costumes remain as they were during the Inferno, though the other effects have faded, and even their psychic avatars reflect the changes, leading the X-Men to think perhaps the changes wrought on them are more than skin deep.

As he attacks Marvel Girl's mind, an assortment of X-Men and X-Factor members see Mr. Sinister for the first time.

Cyclops wonders what makes him so special that Mr. Sinister would go to the trouble of creating Madelyne as a brood mare. 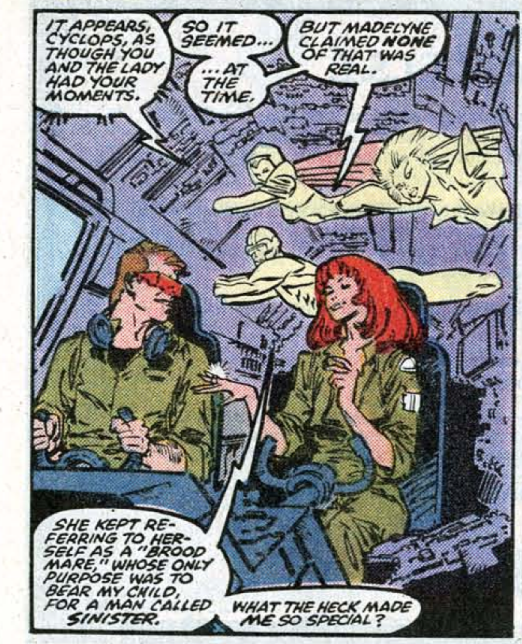 It's revealed this issue that Mr. Sinister has moved into the abandoned X-Mansion and taken it for a base of operations (ransacking the rooms to gain intel on the team), presumably sometime before the start of "Inferno" (as it's only been about a day, story-time, since Madelyne confronted him at his base beneath the Nebraska orphanage).

Characters in this issue refer to recent events as "Inferno", with the quotes.

It's established that the X-Men are invisible even to Ship, though he at least detects a ghostly presence when Longshot is aboard. 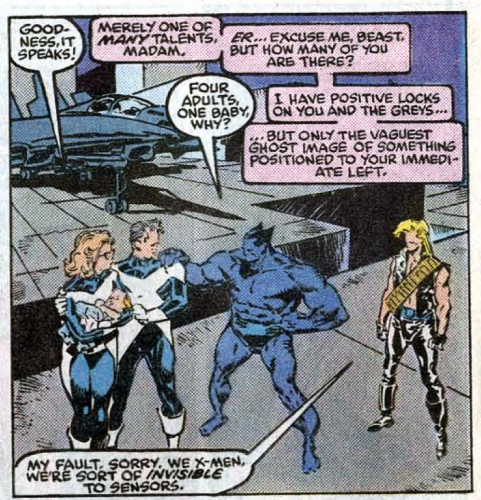 Longshot is worried that he can't undo the changes made to him by N'astirh in issue #241, that he'll be a "nasty man" henceforth. 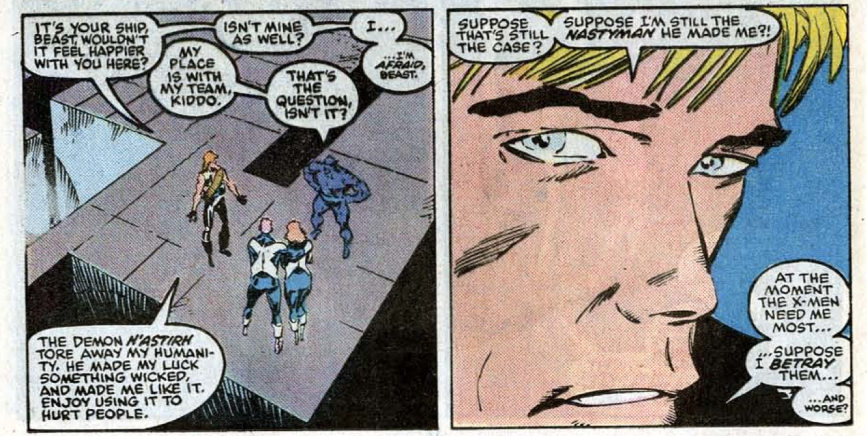 The X-Men encounter a demonically-transformed Blockbuster in the tunnels under the school, and Havok has no remorse about blasting him to death, saying "he's changed". 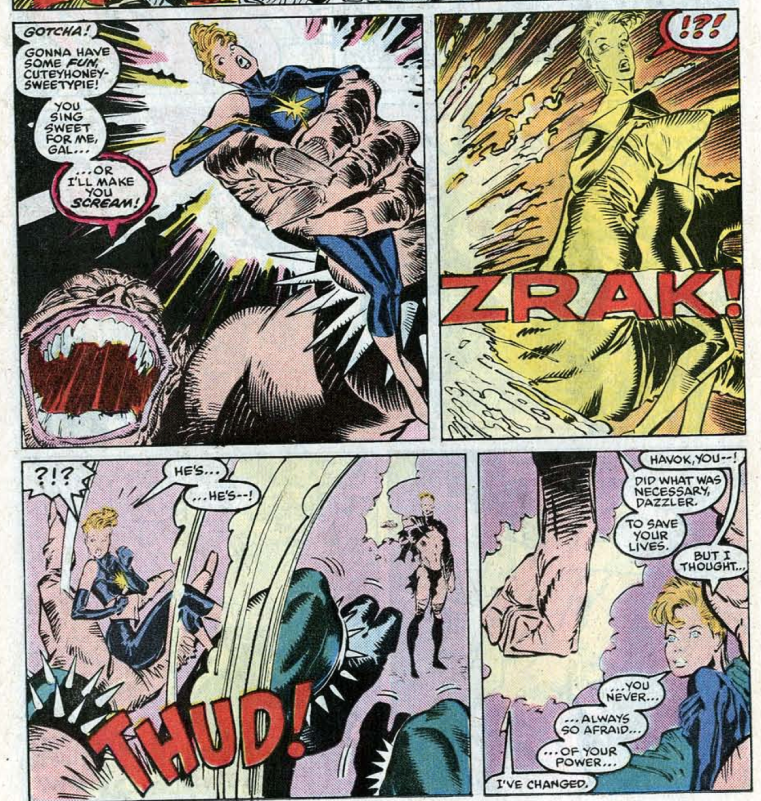 Malice claims that she hasn't taken control of Polaris so much as she's allowed her innate dark side to thrive. 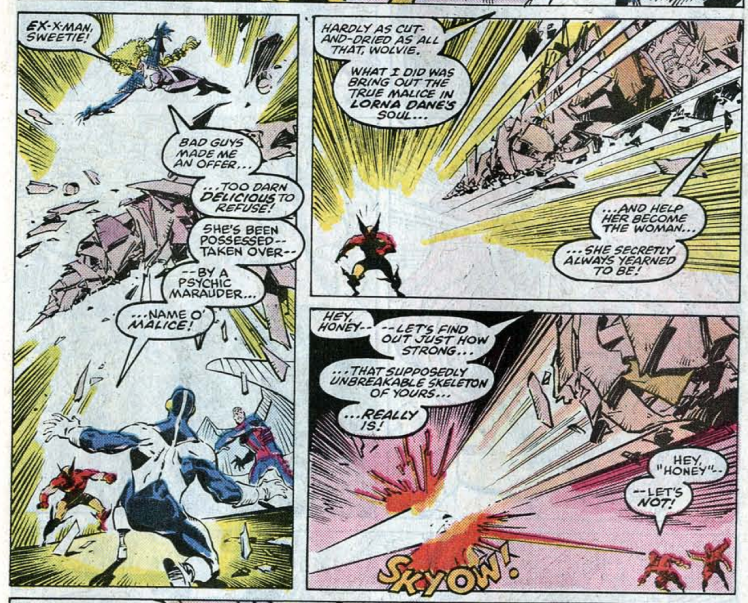 I Love the 80s
Wolverine tells Maddie that she may have been "gypped" out of a decent chance life, a word choice that I don't think would be used nowadays. 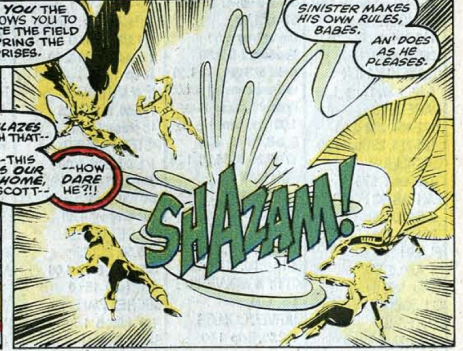 Like a Phoenix, From the Ashes
We see the death of Phoenix once again, something Jean Grey herself is experiencing for the first time (not that she has access to Phoenix's memories). 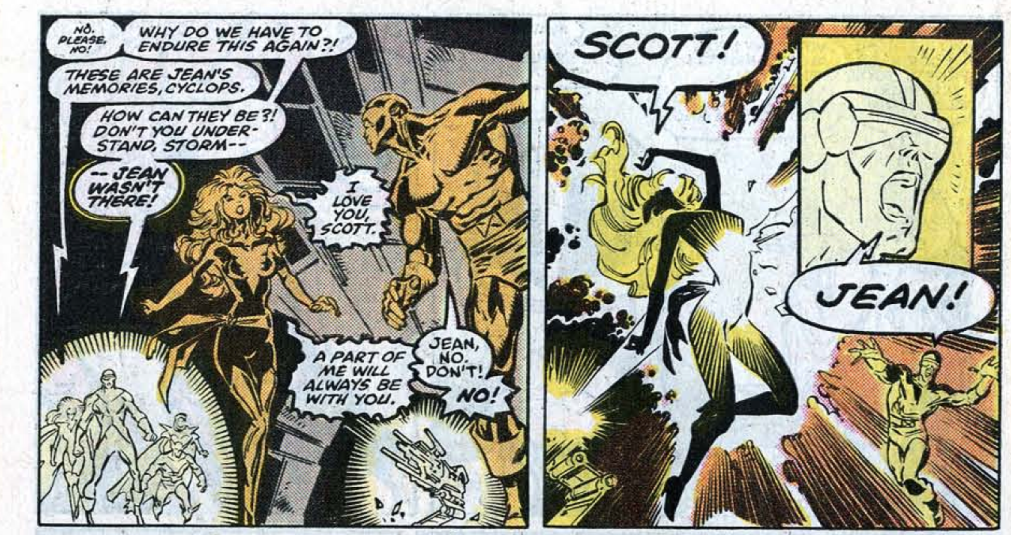 For Sale
There's an ad in this issue for a "How to Draw the Marvel Way" video and a videotape of the "Pryde of the X-Men" animated special (that was intended as a pilot for a potential animated series and stands as my first introduction to the X-Men). Order both, and you'll get a poster signed by Stan Lee! 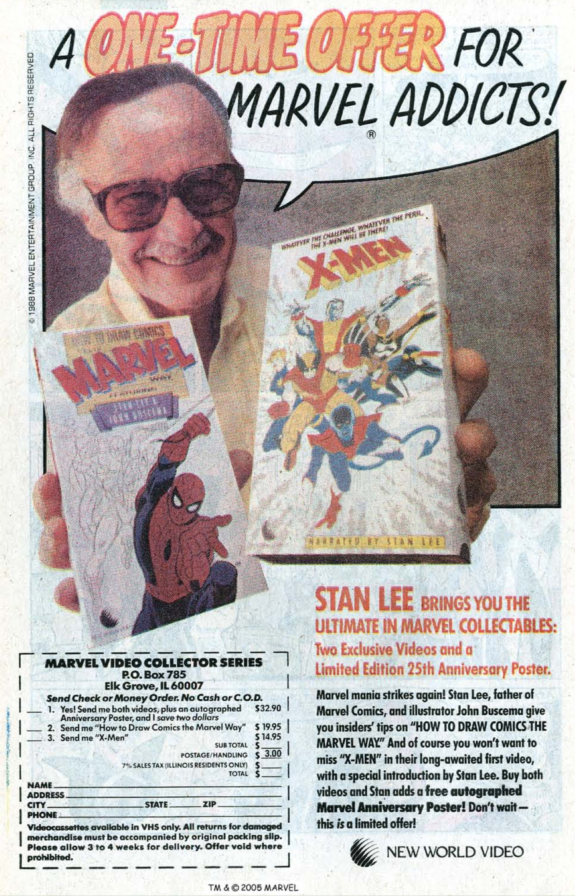 Teebore's Take
With Louise Simonson tasked with (either by choice or because the rotation just worked out that way) expanding the Madelyne retcon and then writing out the character in X-Factor #38, this issue affords Claremont a chance to say goodbye to his creation. To his credit, he does a bit to soften the blow of Maddie's end, having the remnant of her psyche that now exists in Jean Grey's mind agree to help the X-Men and X-Factor take down Mr. Sinister rather than sit back and let Sinister destroy them all (the old "the enemy of my enemy is my friend" routine). By no means does this single act wipe away the copious problems raised by the handling of Madelyne, but at least she gets to go down fighting in a somewhat rational moment (and, to be clear, while Simonson wrote X-Factor #38, Claremont himself isn't blameless when it comes to the handling of Madelyne; ultimately, he signed off on those decisions, however grudgingly).

The rest of the issue, touted as the 25th anniversary of the X-Men and the 150th issue of the "All New" era, is suitably steeped in callbacks to the book's history, recent and older. There's the original X-Men on hand again, of course (including Havok and Polaris), references to the Dark Phoenix Saga (the series' most notable story), a rematch of the more-recent Sabretooth/Psylocke fight and, most notably, a return to the X-Mansion, not seen since issue #221 (and not really a recurring setting for the book since even before then). It's destruction, then, at issue's end, is highly symbolic: just like the lingering changes on the X-Men wrought by "Inferno", the characters are moving in a new direction, darker, edgier, their one-time place of refuge now reduced to ashes. The pre-"Inferno" X-Men were unlike any that had come before them; this issue, capped off by the destruction of the mansion, makes it clear those changes are sticking, and, if anything, the post-"Inferno" X-Men will be moving into even darker, more uncharted territory

Next Issue
Tomorrow. the fallout from "Inferno" begins in New Mutants #74, and Friday, the main "Inferno" narrative wraps up in X-Factor #39. Next week, we look at the last batch of "Inferno" tie-ins.
Newer Post Older Post Home
Posted by Austin Gorton at 12:00 PM