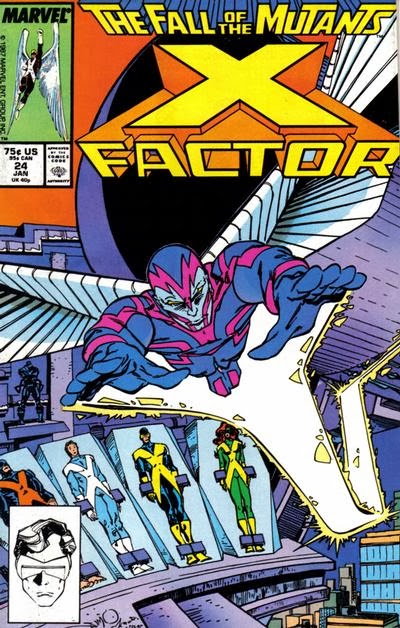 In a Nutshell
The first appearance of Archangel.

Plot
After their battle with the Right, X-Factor finds themselves inside a strange ship. Apocalypse appears and welcomes them to his home. Cyclops orders an attack, but Apocalypse easily bests them, telling them of his long life and taunting them about their actions as mutant hunters. Apocalypse offers them a place at his side as he prepares to unleash his Horsemen on Manhattan. X-Factor refuses and attacks the Horsemen as Apocalypse watches. Though Caliban is quickly forgotten, X-Factor manages to best the Horsemen until Death appears. 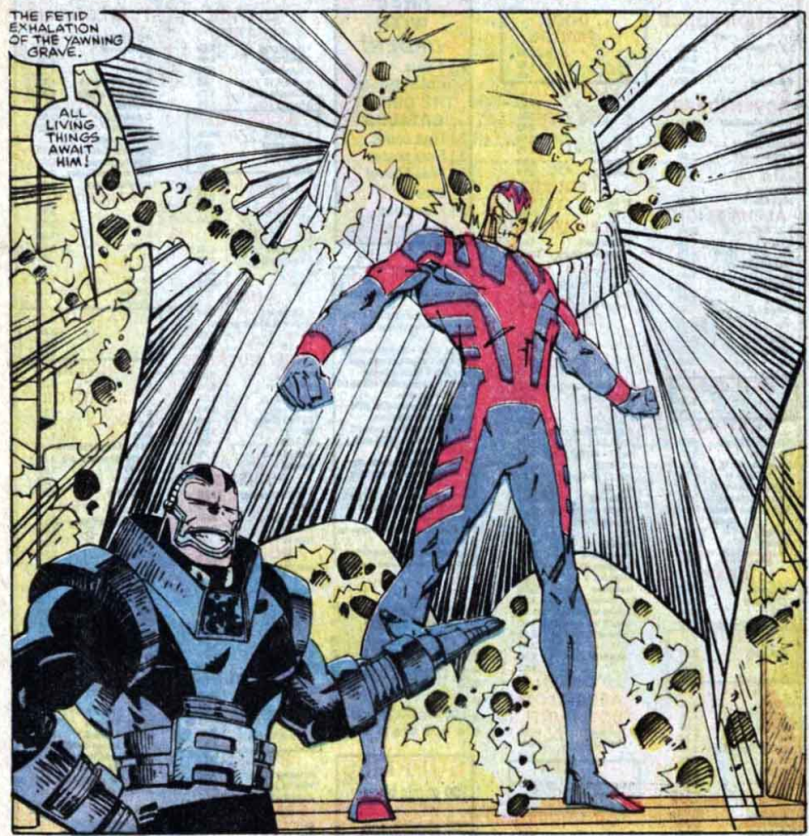 Removing his helmet, he reveals himself to be Warren, their friend and teammate believed dead. Shocked, X-Factor is easily defeated by Death, paralyzed by his toxin-coated feathers. Later, X-Factor finds themselves restrained, forced to watch as Death leads the Horsemen out into the city to cull the weak from the strong. Just then, the forgotten Caliban suddenly appears, and Cyclops urges him to free X-Factor before Apocalypse catches him. However, Caliban apologies to Cyclops before approaching Apocalypse, asking if Apocalypse can give him power as he did Angel. Apocalypse says that he can, and Caliban swears fealty to him, as the Horsemen of Apocalypse ride out over the city.

Firsts and Other Notables
This issue reveals that Death is the not-dead-after-all Angel, plucked from his plane by Apocalypse moments before it exploded in issue #15 and given new, metallic wings (and blue skin for some reason). The character will eventually come to be called Archangel, and this will remain his default look well into the 90s, at which point the metal wings will "molt" and his feathered wings will emerge (the blue skin remains). Then, the blue skin will go away and regular Angel returns for awhile, before it's revealed that he has the ability to transform back and forth from Angel to Archangel. 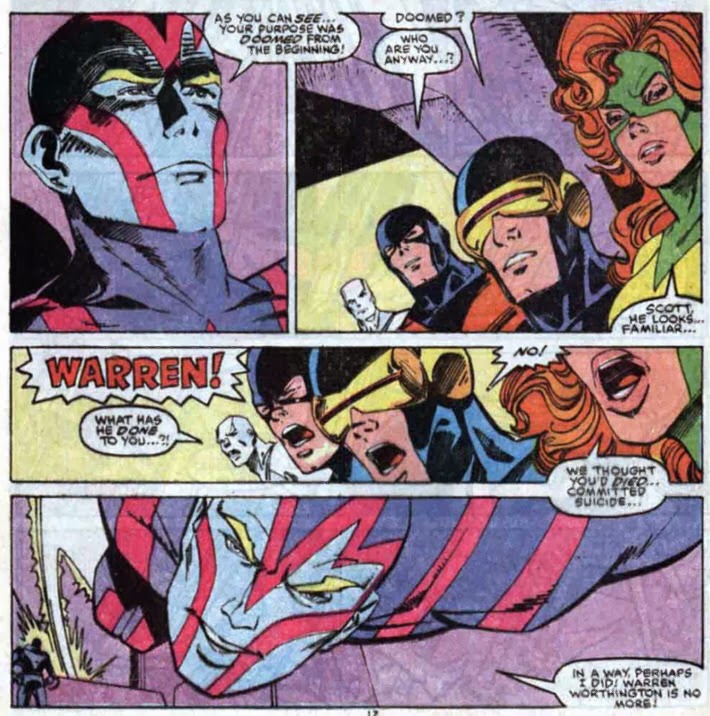 I have no idea how shocking this revelation was to readers at the time - I've only ever read this issue knowing the twist, and all the hints in previous issues make the reveal seem pretty obvious. Though, of course, I say that with the benefit of hindsight.

We also get more background on Apocalypse in this issue, and the information revealed here will functionally serve as his origin for years to come (later stories will tweak and expand on some of these details, but the general idea of Apocalypse having been around since the time of the ancient Egyptians and being obsessed with the survival of the fittest remains). This issue also gives Apocalypse a chance to monologue about his motivations and beliefs, firmly establishing his Darwinian "test mutants so that only the strongest survive" schtick. 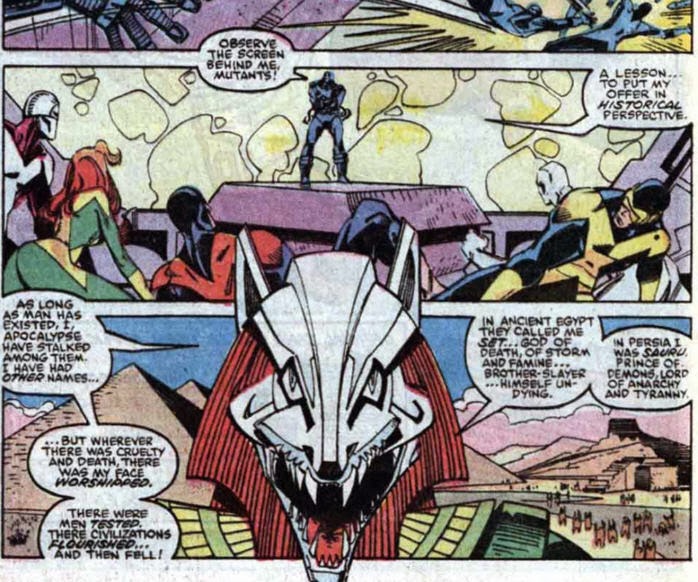 Caliban effectively quits X-Factor in this issue, as he pledges his allegiance to Apocalypse in exchange for power, the culmination of the "Caliban is angry about how relatively powerless he is" subplot. 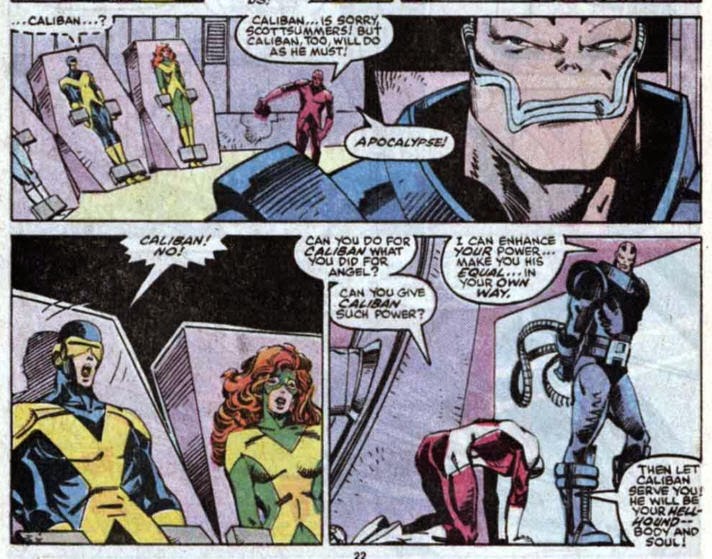 In a pet peeve, the issue ends with a quote from the Book of Revelation, cited as Revelations as it so often is...

And on a personal note, I always remember this issue for being the first back issue for which I successfully bargained, at one of the first cons I ever attended (less a con, really, than a dealer show in a hotel ballroom). Being the first appearance of Archangel, it always commanded higher prices than the rest of X-Factor, and it was a gaping hole in my collection at the time. I managed to talk the dealer down from $14 to $8, which was big mean money to a fourteen year old back in the day (in hindsight, I realize most dealers at this show just want to unload product, especially of this vintage, but I was still proud at the time).

A Work in Progress
Cyclops calls out for "Plan 383", which is basically Iceman attacking first followed by Cyclops, at least based on the art.

It's established that the combination of Pestlience's plague with the drugs Beast received in issues #2-3 have resulted in his "the stronger I get the dumber I get" condition.

It's also revealed that Death's "feathers" are coated with synapse disruptor that induces paralysis. 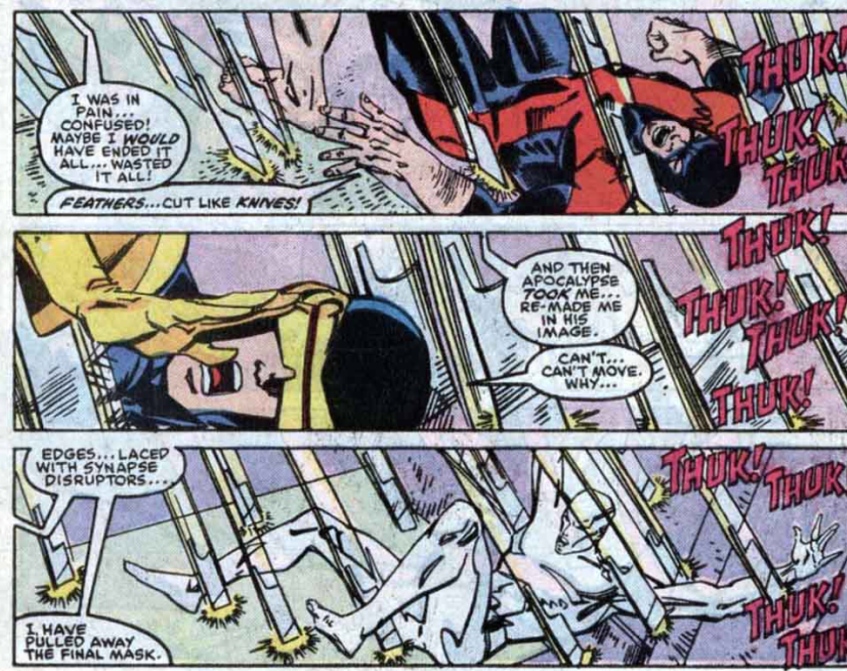 I Love the 80s
War threatens Cyclops, saying his next shot will take off his head. I'm not entirely sure why he's bothering to warn him...

Artistic Achievements
Walt Simonson has some fun with the layouts in this issue, constructing each page of the X-Factor/Horsemen battle such that Apocalypse is always in his own panel to the left, running nearly the entire length of the page, creating the impression that he's lording over the battle no matter where he physically is in the room, while the overlooked Caliban gets his own panel along the bottom that zooms in closer and closer with each page. 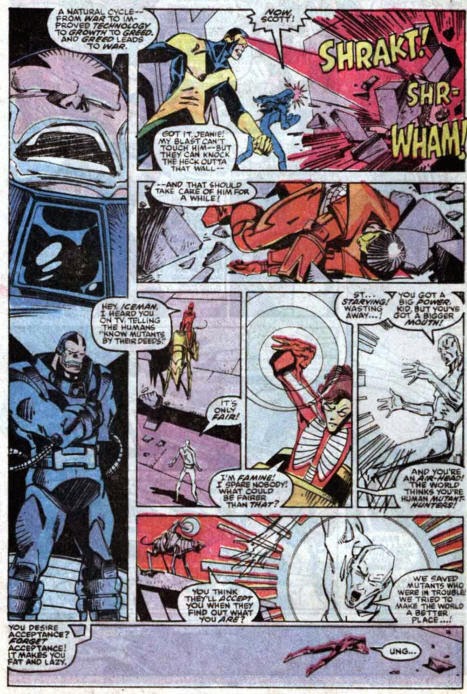 Like a Phoenix, From the Ashes
Apocalypse offers to ignite the spark within Jean, a possible reference to the Phoenix force. 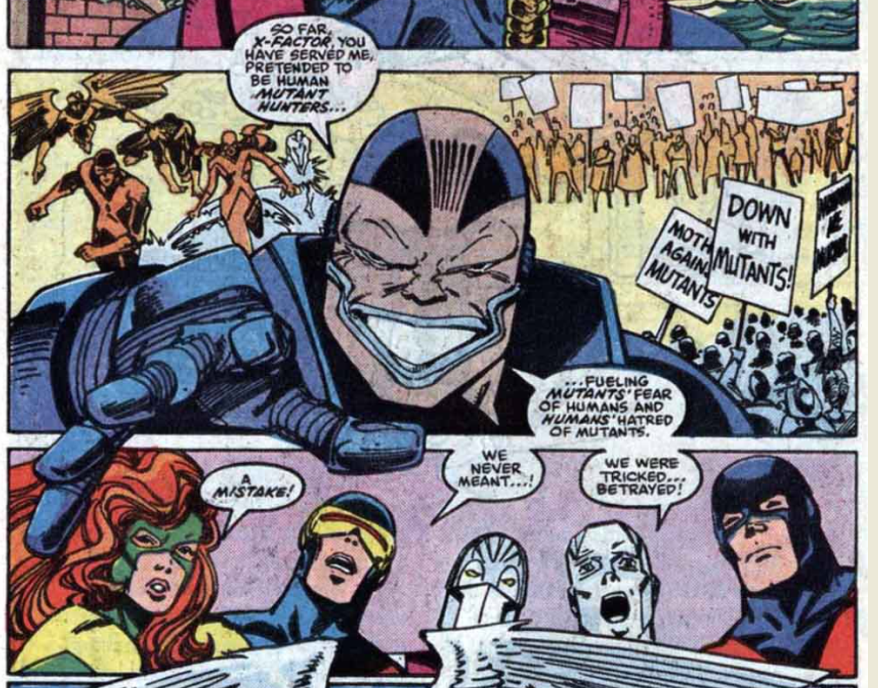 Deeds. Know Them. And So On.
Famine makes fun of Iceman's "know mutants by their deeds" schtick. 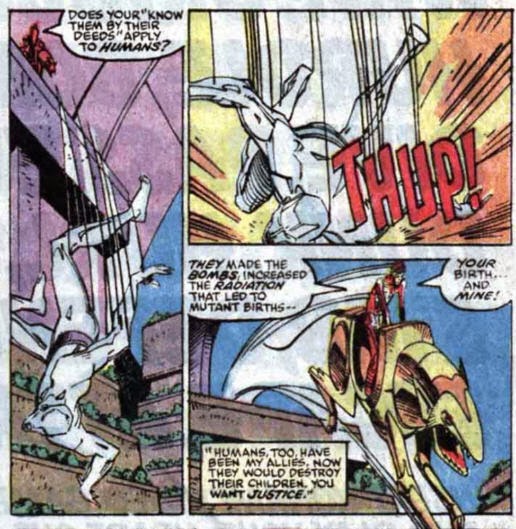 Louise Simonson on Angel's Transformation
"We [her and Walt] both felt that they [the original X-Men] came from a more innoncent age, and we had to make them tougher becayse the times were getting tougher...Some of the older readers and some of the women didn't like the change. It changed him from a character of light to a darker, brooding character - that good old mutant angst."

Teebore's Take
This issue is responsible for the introduction of two important elements to the X-Men narrative. First, after his brief confrontation with the team in issue #6 and a series of subplot vignettes in later issues, this issue puts Apocalypse center stage, clearly establishing his central mantra that conflict must be used to cull the weak from the strong, such that only the strong may survive. In this, he is Darwinism personified. Where the X-Men's conflict with Magneto gains thematic resonance from its parallels to the civil rights movement, Apocalypse here works the scientific angle of human/mutant relations, the belief that mutants are the next evolutionary step destined to supplant humanity. In this way, the issue not only develops Apocalypse as a character, but connects hom to one of the central themes of the X-Men, cementing his place in their pantheon of villains.

Second, this issue reveals that Death is the transformed and not-dead-after-all Angel. In this, we have one of the original Silver Age X-Men darkened, his carefree countenance replaced by a grim visage, his feathered wings replaced by metallic one. Though the Simonsons were merely trying amp up the power of the team, the transformation of Angel in many ways represents the rise of grim-n-gritty characters in the late 80s and into the 90s, as the traditional icons of the Silver Age are replaced or lose their polish in the interest of crafting darker and gritter stories. It's no longer enough to punch a bad guy on feathered wings, you need angst and edginess and the ability to fling little Wolverine claws at villains. Born in the wake of the popularity of Wolverine and characters like him, Angel-as-Death (soon to be Archangel) is the first post-Wolverine anti-hero in the X-books.

In these two regards, then, the ascendance of Apocalypse and the transformation of Angel, this issue becomes an important precursor of things to come. Though other single issues are worthy of consideration, and there are certainly plenty more stories to come before the calendar flips over, it could be argued that for the X-Men, for good and bad, the 90s begin right here with this issue.

Next Issue
"Fall of the Mutants" continues as the X-Men team-up with Freedom Force in Uncanny X-Men #226, the New Mutants suffer a loss in New Mutants #60, and the Horsemen are unleashed on New York City in X-Factor #25.
Newer Post Older Post Home
Posted by Austin Gorton at 12:00 PM