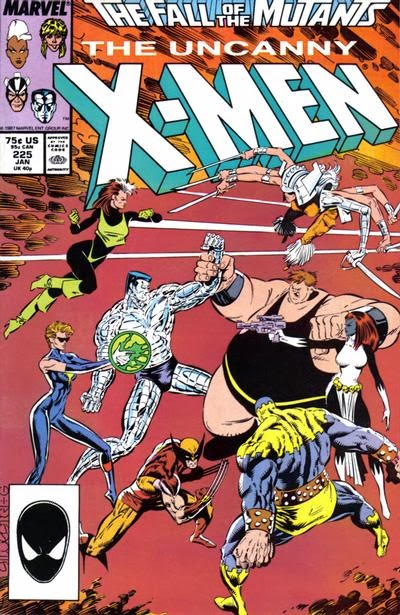 In a Nutshell
The X-Men battle Freedom Force in Dallas.

Plot
In Edinburgh, a recovering Colossus sketches the X-Men, to the amusement of a group of local kids, though a fight quickly breaks out amongst the children regarding whether or not mutants are dangerous. As they run off, Colossus is approached by a mysterious woman who offers to read his palm in exchange for a sketch. When he looks up from his sketch pad, the woman is gone, in her place of a small statute of himself, and when he looks at his drawing, it's of another woman entirely. Elsewhere, the Adversary, still in the form of Naze, arrives in Roma's otherdimensional citadel, where he's imprisoned Roma, the guardian of the Omniverse and the woman whom appeared on Colossus' drawing. With Storm and Forge removed from the board, the Adversary gloats that chaos will finally reign in the universe, though Roma thinks to herself that the game isn't over, and that players exist of whom the Adversary is unaware.

Back in Scotland, Colossus calls the X-Men, motivated by his encounter with Roma to rejoin them. He reaches his sister, and Illyana teleports to Scotland, agreeing to send Colossus to wherever the X-Men are. In Dallas, the X-Men arrive outside Forge's derelict skyscraper. Tracking Storm's scent inside, Wolverine is cut down by Forge's automated defenses, and must be dragged out of the building, where the X-Men find Freedom Force waiting for them. Mystique declares they are going to take the X-Men into custody. A fight breaks out between the two teams, at which point Colossus is dropped into the battle by Illyana. Both Psylocke and Dazzler are knocked out, but the X-Men capture Mystique and flee inside the building to regroup. Just then, a hole appears in the night sky through which sunlight pours, and Destiny cries out that it has begun: the end of the X-Men, and possibly the world.

Firsts and Other Notables
"Fall of the Mutants" begins this issue, the second linewide X-Men crossover. Following the commercial success of the prototypical "Mutant Massacre", Claremont and Simonson were essentially ordered to do it again, and "Fall of the Mutants" is the result, complete with tie-ins in non-X-books, though the idea of the linewide crossover as we know it is still evolving at this point, as we're not yet at the point where a single narrative is shared across the various titles. Also as was discussed in the posts on issues #200 and #211, and outlined here, "Fall of the Mutants" is another storyline affected by Claremont's inability to use the Alan Moore-created characters from Moore's Captain Britain stories, with the Adversary essentially subbing in for Jim Jaspers and the Fury.

This issue features the return of Colossus, the first of the Massacre-injured characters to rejoin the team (reportedly, Claremont intended for him to be in Excalibur alongside Nightcrawler, Rachel and Kitty, but realized he was somewhat redundant alongside the super-strong Captain Britain, so he brought him back to X-Men). Colossus' return completes the casting of the "Outback Era" team, as this group of characters will be featured from this point forward until Claremont blows up that status quo in the 250s.

As a result of his injuries, Colossus' default state is now metal, and he is only able to turn back to flesh with tremendous concentration, a status quo that will remain in place until after the character emerges from the Siege Perilous in issue #259. 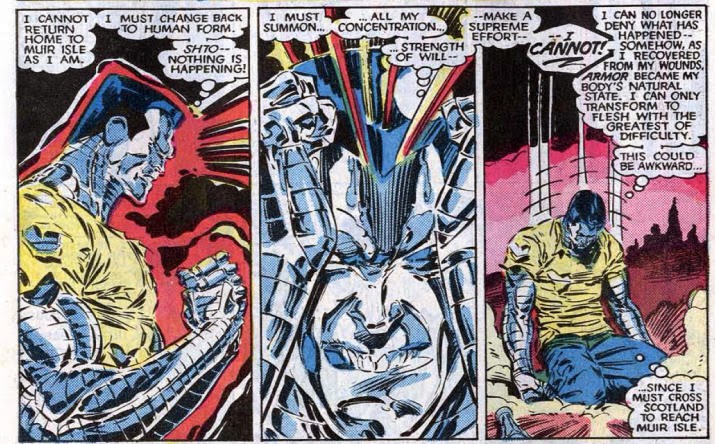 Roma, daughter of Merlin and current guardian of the Omniverse, appears in this issue, as both a strange woman who meets with Colossus and a prisoner of the Adversary. She was created by Claremont as part of Captain Britain's original UK series and was a fairly integral part of that character's backstory/mythology (she's responsible for giving Captain Britain his powers). She'll remain a player in this storyline (and her interaction with Colossus here will be a plot point later), and Claremont will continue to use her, occasionally in X-Men but more often in Excalibur, moving forward. I believe this is her first appearance in an American comic, but I could be wrong. 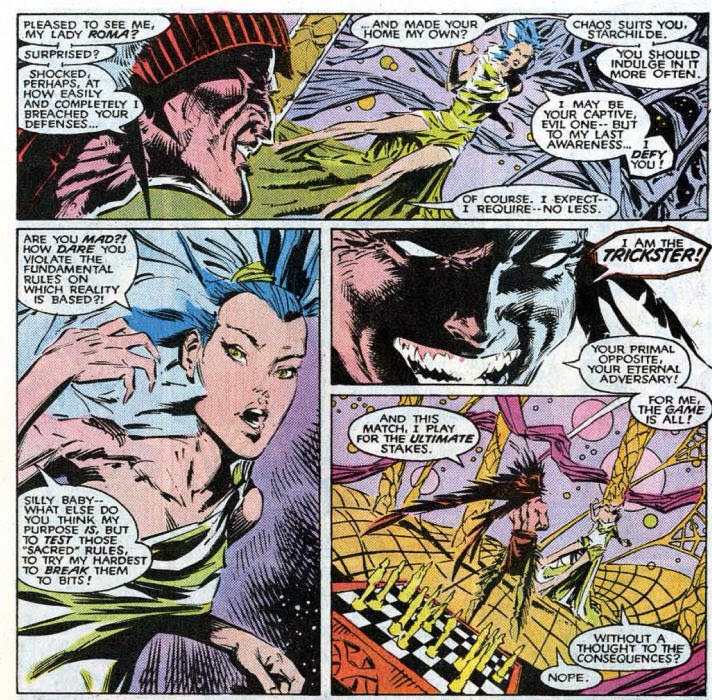 I should have noted this in Incredible Hulk #340, but the X-Men's Blackbird jet pretty much disappears for awhile at this point. They fly it to Dallas, as seen in Incredible Hulk #340, but after "Fall of the Mutants" and their relocation to the Australian outback, the mutant Gateway provides their means of transportation, and the jet won't appear again until after the reorganization of the line in 1991. So presumably, from this point forward, the Blackbird is just hanging out somewhere in Dallas.

This is Tom Orzechowski's 100th issue lettering the series (and his 61st consecutive issue, stretching back to issue #165), something of a milestone whose acknowledgement is sneaked into the background of a panel by inker Dan Green.

The Chronology Corner
Illyana appears in this issue, between pages of New Mutants #58 (just prior to teleporting the team to Bird-Brain's island). 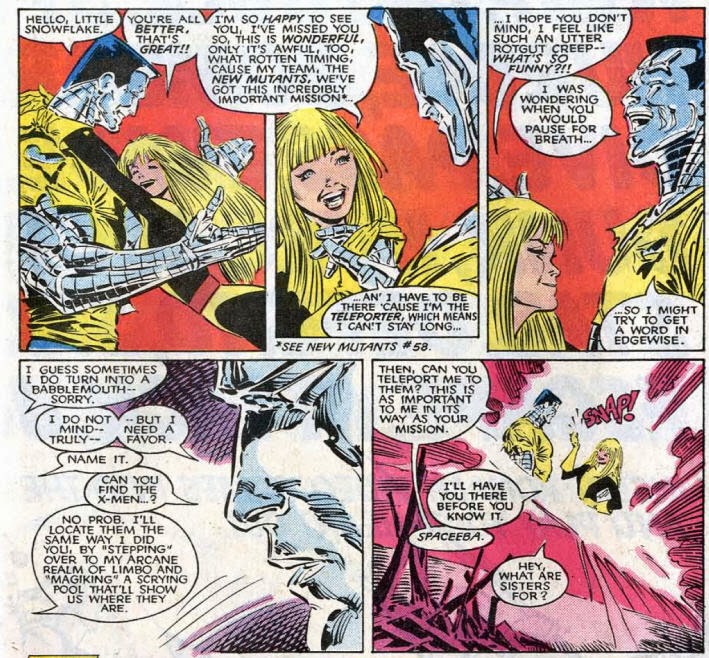 A Work in Progress
Colossus sketches, and the narration references, Havok battling Juggernaut in issue #218, though he was not present for that story, rejoining the X-Men in issue #219.

As in Incredible Hulk #340, it is snowing in Dallas, and Rogue points out it was doing the same thing the last time the X-Men were there, in issue #187-188. 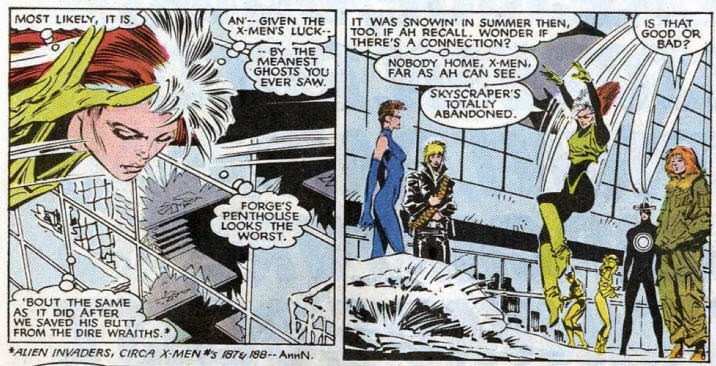 Spiral seems familiar to Longshot, something which freaks her out.

Crimson Commando is apparently capable of mentally existing without being perceived. 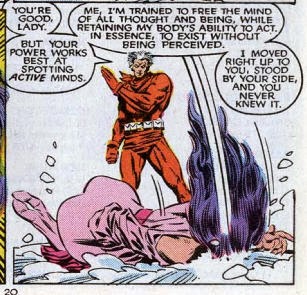 I Love the 80s
The Scottish kids talking to Colossus say he's not American because he sounds like neither JR Ewing or Max Headroom. Voting for Thatcher is also considered an insult. 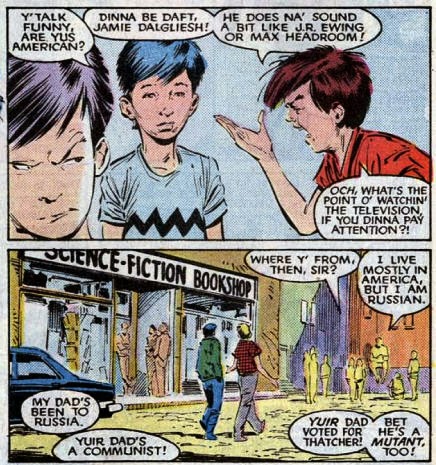 Colossus tries to call the X-Men from a pay phone in a phone booth.

Artistic AchievementsThere's a great sequence of panels showing Blob falling from on high to land atop the crippled Wolverine. 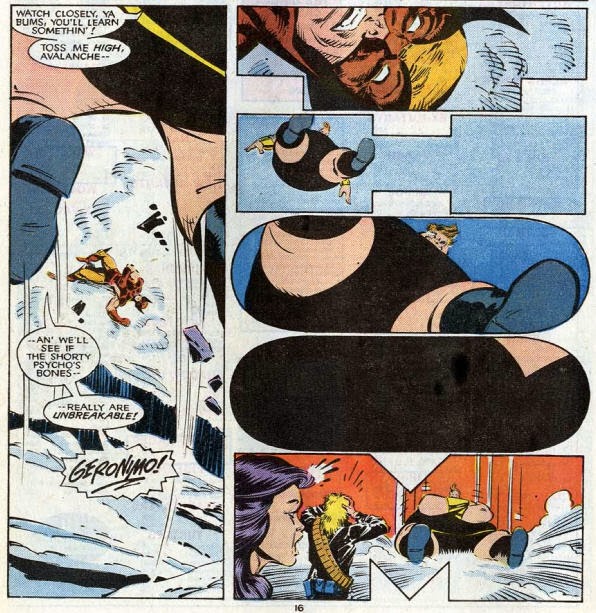 Later, in a genuinely hilarious moment, Blob is motivated to move when Wolverine is finally able to pop his claws into his butt. 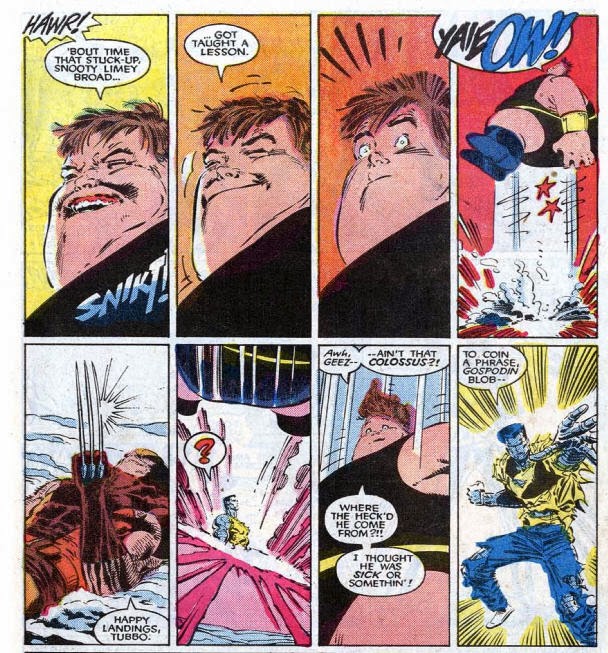 The Best There is at What He Does
In another neat detail, Longshot is unable to carry Wolverine, as Longshot's hollow bones can't take the strain of Wolverine's metal ones. Also, Wolverine will spend the rest of this issue and parts of the next unable to move as a result of these injuries, as his healing factor takes time to get him back to normal; for whatever reason, this is the moment I always think of whenever I'm reminded of how ridiculously overpowered Wolverine's healing factor becomes in later years.

Human/Mutant Relations
The Scottish children have heard of X-Factor, and claim they are the real heroes. 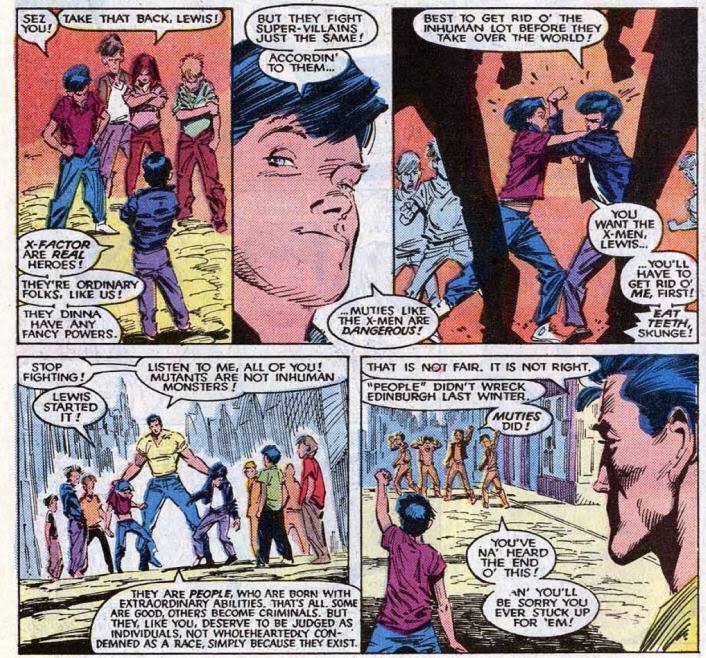 Mutants. Deeds. Etc.
Claremont arguably cribs Simonson's "know mutants by their deeds" idea when he has Colossus fly into a rage when he can't work a phone, destroying the booth, then wonder if that's perhaps why mutants are so feared and hated.

For Sale
"Pele is king of the soccer field. To be king of your kitchen, use Crestfield wax paper.". 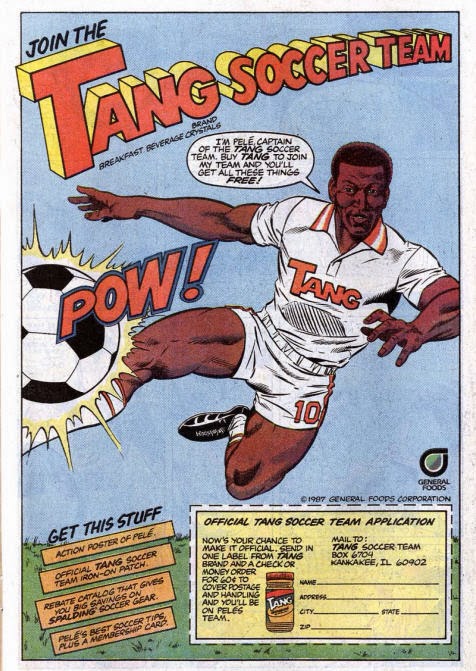 There's also a double page ad for Konami Nintendo games in this issue. 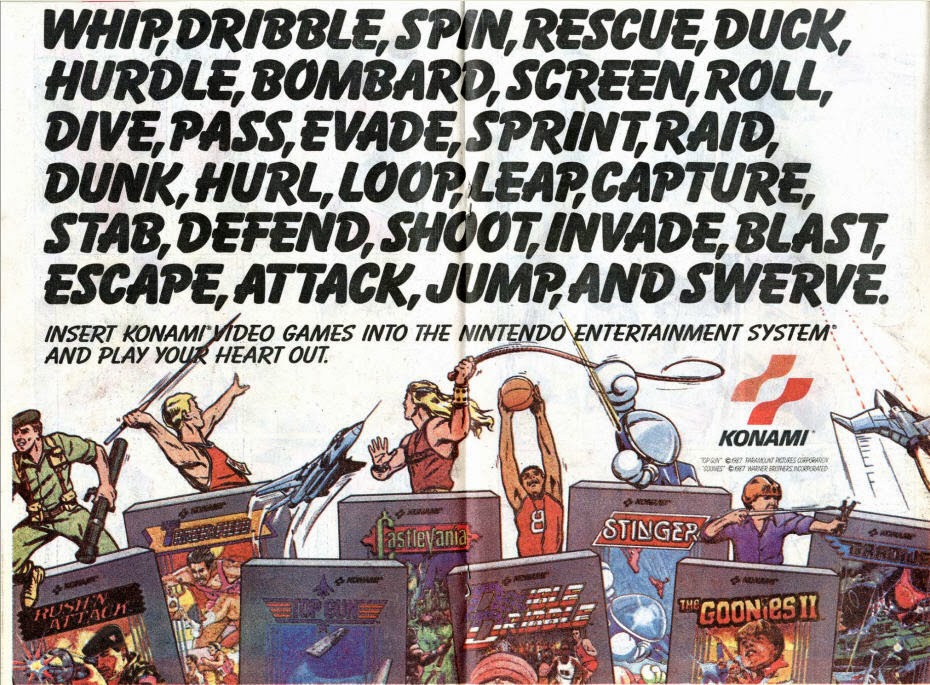 Teebore's Take
And with that, "Fall of the Mutants" officially begins. If "Mutant Massacre" was the first linewide crossover that, while prototypical, laid the foundation for future crossovers, "Fall of the Mutants" is the next step in that evolution, though it still remains, in form and structure, very different from the crossovers of the future. "Crossover", in fact, is something of a misnomer, as the three X-titles don't actually directly cross over with one another, but rather each tell their own three-part story with "The Fall of the Mutants" slapped on the cover (that cover branding representing a marketing improvement on the label-less "Mutant Massacre").

This follows on from "Mutant Massacre", though at least that story had a central event (the massacre of the Morlock) to unite the books, even if the characters didn't interact directly with one another. With "FoM", the inter-title connection is more thematic (bad things happening to mutants), with literal crossovers restrained to minor elements (like the X-Men showing up on TV, watched by X-Factor). It's a bit of a copout when the word "crossover" is tossed around, especially to modern audiences more familiar than they'd like to be with the mechanics of these things, but in the context of the time, it's an interesting exercise in the evolution of the still-novel linewide crossover.

As for this issue, the first part of Uncanny X-Men's contributions to "Fall of the Mutants" and the beginning of the payoff to long-simmering Adversary story, things start off relatively quiet. The book is divided in half, nearly evenly, with the first half doing the business of reintegrating Colossus into the book, establishing his new status quo and mindset in the wake of the last crossover, while the second half shows the X-Men in Dallas and drops them into a pretty well-executed battle with the newly beefed up and legally-empowered Freedom Force, as the Adversary, thinking he's won, looms in the background.

The structure is a further indication of the still-prototypical nature of the crossover, as it devotes its first dozen pages to, essentially, a character study while spending the rest of its pages on a fight with villains who aren't even the main adversary (pun intended) of the storyline. It's an indication that Claremont is fitting the crossover, such as it is, to his narrative, and not vice-versa, an approach that, despite the lack of traditional crossover formality, should nonetheless be appreciated.