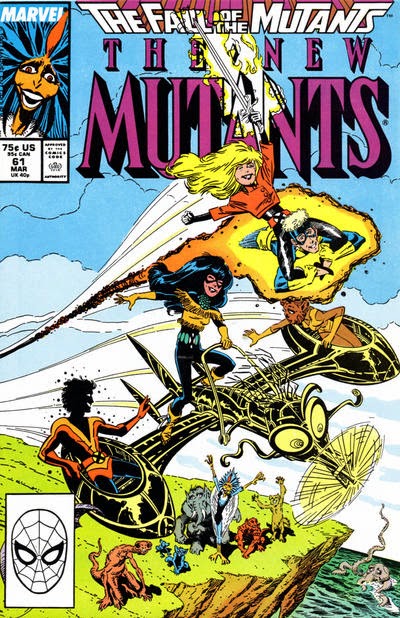 In a Nutshell
The New Mutants deal with Doug's death.

Plot
On the Animates' island, Rahne is hysterical over the death of Doug as Illyana teleports the remaining Right soldiers to Limbo. When she returns to the island, the New Mutants say goodbye to Bird-Brain and the Animates, then teleport home with Doug's body. Meanwhile, Magneto arrives at the Hellfire Club amidst the devastation caused by Apocalypse and his Horsemen, and learns of the X-Men's battle in Dallas. Back at the mansion, the New Mutants all react to Doug's death in their own way before calling Magneto at the Hellfire Club. As they wait for him to return, they watch the footage of the X-Men seemingly dying in Dallas. Just then, Magneto arrives and learns of Doug's death. His sadness quickly gives way to anger, as he suspends the New Mutants in midair, asking if that's the only way he can keep them safe. 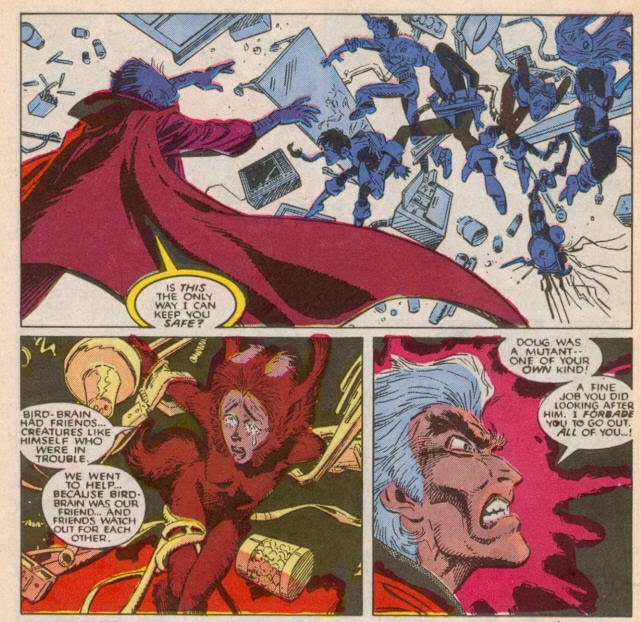 He forbids them from leaving the school or using their powers without his permission. The New Mutants break free, and when Magneto refuses to go to the aid of the X-Men, Illyana teleports to Dallas herself. She returns moments later, unable to enter the city but able to confirm that the X-Men are dead. She angrily attacks Magneto as her teammates plead with her to return her Soul Sword to Limbo. They prevail, and Illyana, in tears, teleports to the attic. As Magneto tends to Doug's body, the New Mutants gather in the attic. Creating new costumes, they rededicate themselves to Xavier's principles. With the X-Men dead, they declare that they're all that's left to fight evil mutants and humans alike, all that's left to save the world.

Firsts and Other Notables
This issue ends with the New Mutants declaring their intent to continue the X-Men's work in the wake of Doug and the X-Men's deaths and Magneto's efforts to exert more control over them. To that end, they abandon their school uniforms and don a new set of individual Blevins-designed costumes. They are more uniformed and less elaborate than the earlier Art Adams-designed graduation uniforms, but as with the Adams costumes, Illyana's remains the best. These are the costumes they will wear until shortly after Rob Liefeld and Cable come aboard the series. 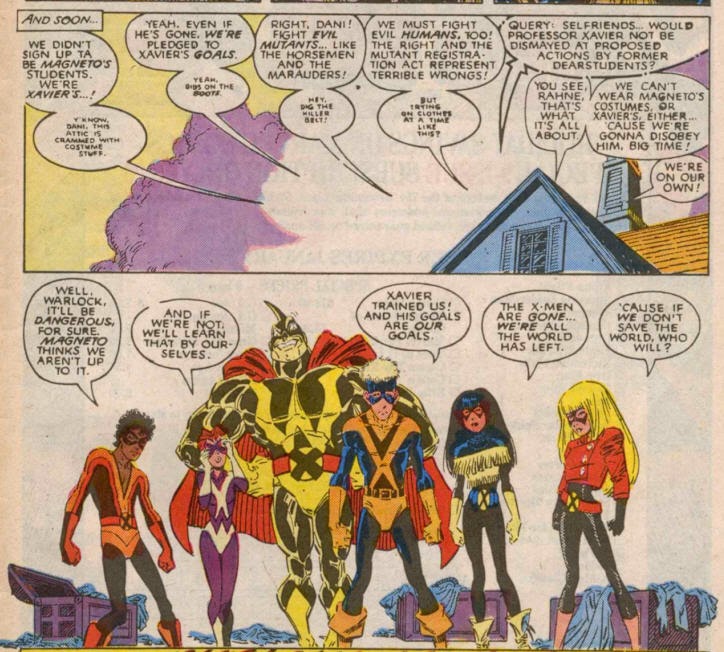 This is thankfully the last we'll see of Bird-Brain, as he elects to say on the island with the other Animates after a handwaving explanation is given for why they can't join the New Mutants back at the mansion. 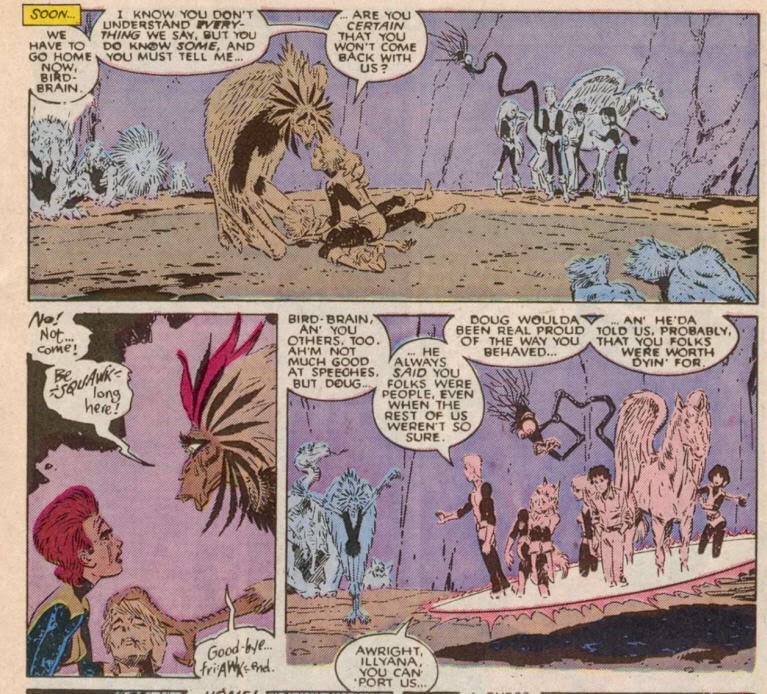 Taking advantage of Illyana's increased use of the Soul Sword recently, S'ym has gained a further foothold in Limbo, which will become a more pressing matter in the run-up to "Inferno". Illyana also sends the remaining Right troops there; they'll popup occasionally in future Limbo stories. 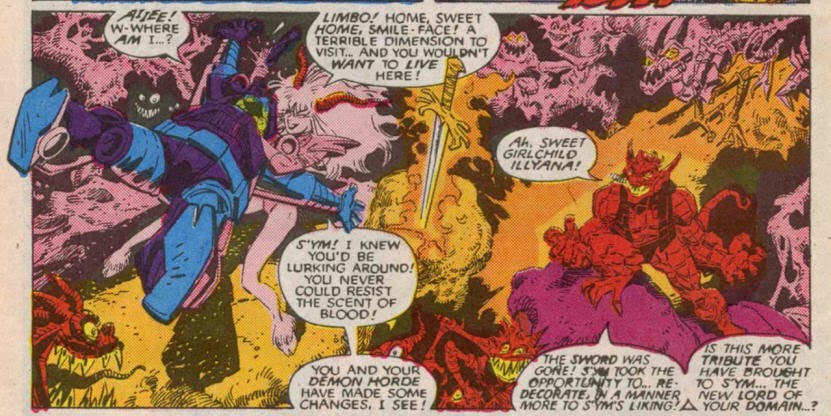 We also get our first look at Blevins version of Illyana's Darkchilde manifestation (which will also become more prominent and demonic leading up to "Inferno"). The thong is even creepier now that Illyana is consistently drawn like a thirteen year old. 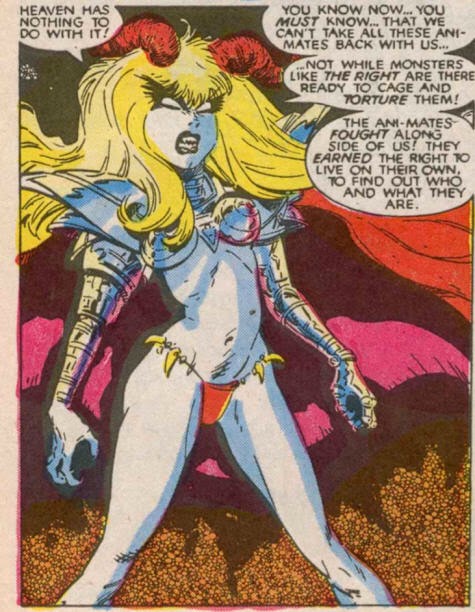 When Magneto visits the Hellfire Club, both Leland and Von Roehme are erroneously on hand, despite having died in Uncanny X-Men #208 and #209. Magneto also erroneously refers to himself as the White Bishop (he's the White King). 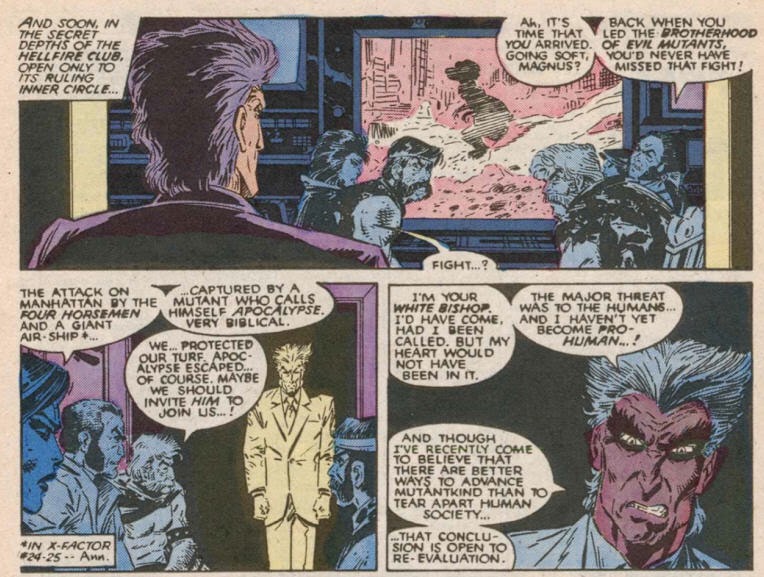 Given the contents of both last issue and this one, everyone is way too happy on the cover.

A Work in Progress
I have no idea what Illyana is doing on the opening page. 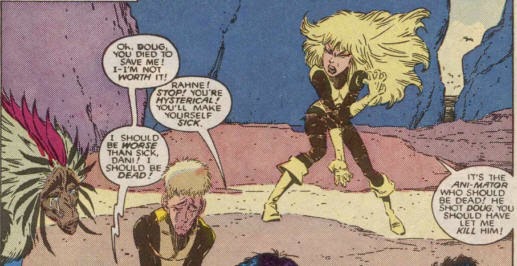 Roberto is back, which means it's time to be reminded that he's not invulnerable!

Brightwind, who was with the New Mutants in issue #58, was sent away by Dani in #59 and didn't appear in #60, is back on the Animates island this issue.

Sam tells the Animates that Doug always believed in their humanity, even when the other didn't. Except in issue #57, which he spent steadfastly refusing to try and talk to Bird-Brain because he thought he was just a dumb animal.

As Magneto flies into New York, he sees the damage caused by X-Factor's battle with Apocalypse in X-Factor #25. 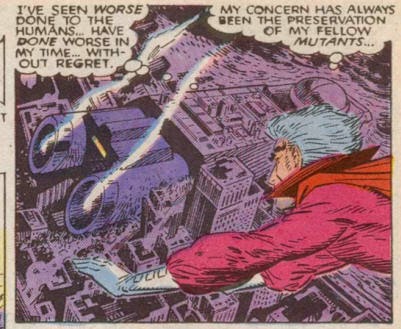 Later, he reacts to X-Factor's outing of themselves as mutants.

The New Mutants look at a series of pictures of the X-Men through the ages. The picture of the present day X-Men must have been taken circa X-Men Annual #11, before Storm left to find Forge and the X-Men relocated to San Fransisco.

In the wake of Doug's death, Sam and Rahne grow closer and agree to look after one another like siblings, which will make it all the more awkward when Rahne develops a crush on Sam in a few issues.

Dani angrily admits that she should have known better than to sneak out and not tell Magneto where the New Mutants had gone. 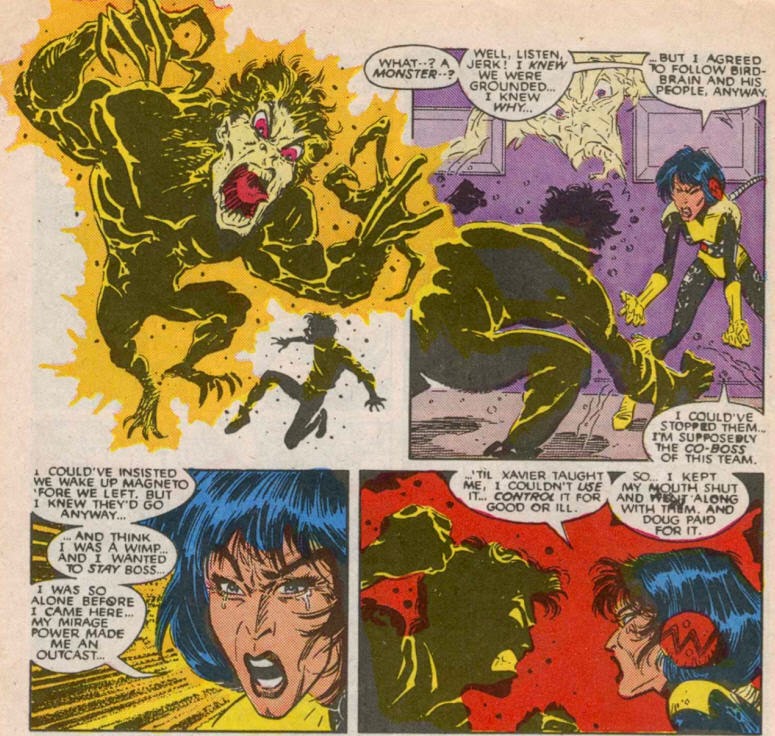 Magneto gets a great moment, upon learning of Doug's death, saying he now has to call Doug's parents (who don't know their son was a mutant nor the truth about Xavier's school) and explain how he allowed their son to die. 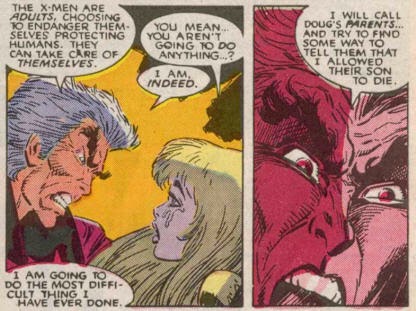 Illyana, upon seeing the footage of the X-Men in Dallas, attempts to teleport there to help her brother, but is unable to enter the city due to magical barriers in place around it. 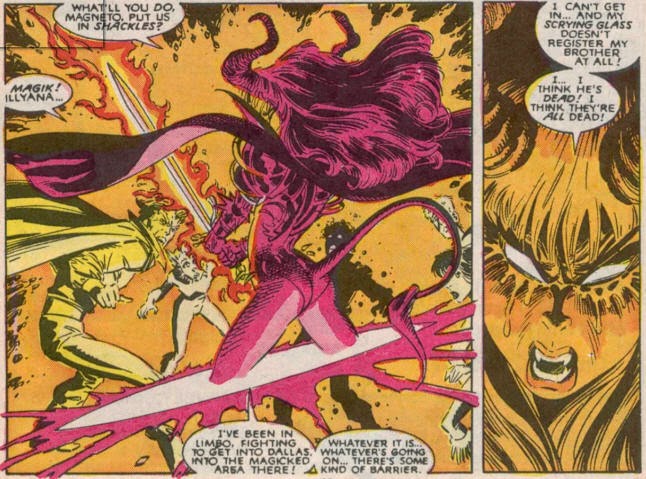 Human/Mutant Relations
Magneto reacts about as well as you'd expect to the news of the Mutant Registration Act. 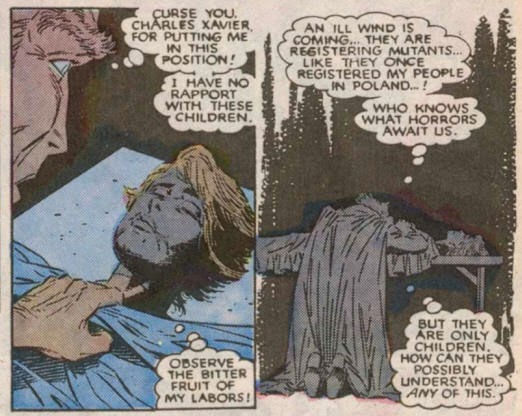 Teebore's Take
As with the other "Fall of the Mutants" issues published this month, this issue sets up a new status quo for the New Mutants, as in the wake of Doug's death, as well as the perceived deaths of the X-Men, they rededicate themselves to Xavier's teachings, don new costumes, and decide to fill the gap left by the X-Men. And, has been the case with the rest of this crossover, once again, its the New Mutants' portion that comes up short, as this new status quo never really materializes as anything more than new costumes and more arguments with an increasingly erratic and out-of-character Magneto before the team ends up hanging around with X-Factor and then Cable, remaining firmly in the "still students" mold until they become X-Force.

But all that aside, this issue does do an effective job of dealing with Doug's death. As needless and maddening as his death was, Simonson at least gives it the attention it deserves, more or less dedicating this issue and issue #64 to exploring the ramifications of it. Here, each character (except Warlock, whose chance is coming) is given a chance to react in their own way to the death, and for the most part, they react in a genuine and true-to-character manner (Rahne is devastated, Sam and Dani blame themselves, Roberto makes it all about him). Blevins work continues to be exaggerated and cartoony but his knack for body language and facial expressions comes in handy in this issue. The image of Magneto collapsing over Doug's body is particularly effective: you can almost see him shuddering as he strains to control his sorrow and rage.

So while the new status quo established in this issue ultimately fizzles, Simonson at least accomplishes the far more important task of giving Doug the sendoff he deserves. It's a shame that she decided to kill him off, but at least his death is getting its proper due, and isn't just being swept under the rug in favor of the next big storyline.