Well, it's a good thing I was lazy the last couple of weeks and held some reviews back, because with Walking Dead and Game of Thrones getting their own posts and most everything else taking a break on account of Easter/April, this would be an even shorter post without a few of the hangers-on.

Once Upon a Time: Selfless, Brave and True 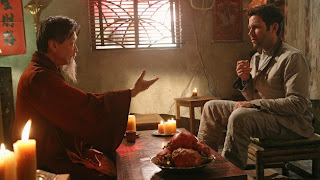 In terms of episodes involving a flashback featuring a ruggedly handsome character going on a vague and quasi-mystical journey in an Asian country, this one exceeds "Stranger in a Strange Land", the "Origin of Jack's Tattoos" episode of Lost, though that is admittedly a pretty low bar to hurdle. Compared to the previous two episodes of this series, this was a step down, largely let down by some more dodgy CGI and laughably-convenient plotting (see below). Most of it was setup for the villains and arc that will, presumably, carry us through to the end of the season, and I can't deny there isn't something intriguing about a group of people who are after the magic in Storybrooke despite not hailing from Fairy Tale Land, even though Tamara herself is still pretty one-dimensional and hard to care about.

Other Thoughts
That said, I'm not convinced that Tamara isn't a fairy tale character. Like I said last week, everyone is somebody else on this show.

Okay, so the whole "we need the Blue Fairy!/Here I am!" business at the end was downright laughable. Like, a "they're just not even trying" level of laughable. Also, it was bad enough when Tamara was able to tase someone called "the Dragon" to death, but it was downright ridiculous when she was able to somehow kill an entirely wooden August with a taser. I mean, wood doesn't even conduct electricity. What the hell killed him? Surprise?

While I was surprised that Regina clued in on the truth about Owen so quickly (especially after all the build-up last week), I was also bummed about the reveal that he's in cahoots with Tamara. I liked the promise of the character when it seemed like he was back in Storybrooke to get even with Regina and find his dad; he's loses a lot of sympathy now that he's fooling around with another man's fiancee, one who happens to be pretty nefarious herself.

It ultimately didn't matter because she's evil and knows all about Storybrooke already, but, while I respect Neal for telling Tamara the truth about his past, it probably would have been better if he'd told her about his life as a fairy tale character at a time/place where he could prove it.

The discussion of redemption between August and Snow in the trailer at the beginning was pretty much, as my brother suggested, the opposite of the Tywin/Tyrion scene in the Game of Thrones premiere, in which the two characters were more less shouting their feelings at one another. It's like they're saying, "got that audience? In this scene, Snow is telling August things that would also apply to her. Everyone with us so far? Good."

Now that Pinocchio is a little boy again, I guess that means the end of Eion Bailey on the show, which is too bad.

Mrs. Teebore wondered, if this one act of evil is having such a large effect on Snow, what the hell does Regina's heart look like?

Regina: If I were you, I’d try the fish special. It’s right up your alley: blackened sole. 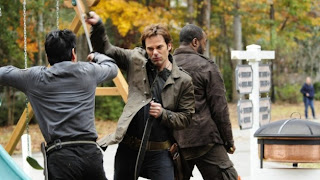 Give this episode credit: by the time Randall had the hospital surrounded, I totally figured we were in for another frustrating case of "I'll tell you everything you want to know once this is over, oops, I got captured and am no longer in a position to reveal anything", followed by a new multi-episode quest to rescue another Matheson. Instead, the show smartly (and almost winkingly) subverted expectations and kept Rachel around, a development that was made all the better by the fact that it was facilitated by Charlie, who seems to have let the death of Danny wash away her wishy-washiness (so another win for the decision to kill him off). As a result, it seems like we're finally poised to get some answers from Rachel next week, and it seems like the show is doing its best to not slip into old patterns.

Other Thoughts
That said, I'm surprisingly not all that excited to learn more about the blackout. In part, I feel like we learned a fair amount in this episode (it was intended to work on a localized area, then something intentional or accidental happened and it spread everywhere), aside from some details. And while I never thought I'd say this, I was kinda bummed that we learned so much about Randall's motivations and back story so soon. Maybe it's just because all of it was fairly routine (he wanted to use the blackout tech to prevent what happened to his son from ever happening again, and now, in classic villain fashion, he's become just as bad as the people he was trying to stop), but I wish he'd remained mysterious a little longer.

It's always fun to see Miles kick ass (I love how Miles, Nora and Hudson were able to take out about three dozen guys themselves) and it's good to see another Alphas castoff getting work, but I hope the rest of this season isn't going to feature a quest every episode in which Miles recruits another old buddy.

Another pleasant surprise: as soon as it became clear that A. Hudson was reluctant to help Miles because of his wife and B. That a contigent of militia forces were heading towards Culpeper, I figured his wife was a goner, thus allowing Hudson to join up with Miles. I'm glad the show found a way to bring about the expected result while avoiding the expected route to it.

The Stephen King allusions crossed over from subtext to supertext, as Hudson's library shelves were crammed with the author's books, and he even handed a copy of The Stand to one of its patrons. 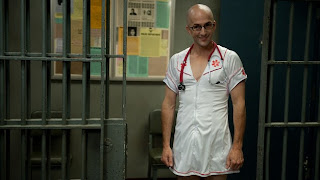 This was the new regimes first episode in the subset of episodes I think of as "the study group vs. Greendale" (like season three's "Competitive Ecology", which introduced Todd to the show), in which the relationship between the group as a whole and a student or students at Greendale is the focus of the story. It fit pretty neatly within that subset, helped along by the slow realization by the study group that they're the Nazi Germany of the school and capped off by the Malcolm McDowell's hilarious reaction to the idea that he orchestrated the events of the episode just to teach the seven main characters a lesson. That said, I usually don't like that type of episode as much, here or on other shows (they tend to be about how, if we weren't watching the protagonists on a TV show every week, we probably wouldn't like him, thus forcing us to question our affection for characters that, in most other episodes, we're expected to like, so the whole thing comes off like an attempt by the show to bite the hand that feeds it), but this one was helped along by all the stereotypical German accents, which I never don't find funny.

Other Thoughts
This episode clearly aired out of order, as it depicted the first day of the gang's history class, despite previous episode making it clear they'd been going to class.

Of all the various "let's make you uncomfortable rooting for these characters who everyone else sees as jerks" moments in this episode, the one I liked the least was the inclusion of the D&D game in the "they're monopolizing the study room!" montage, since that episode was all about the main characters explicitly trying to help another student.

Loved the way Annie pulled her sweater closed when Malcolm McDowell mentioned why he was teaching at Greendale. 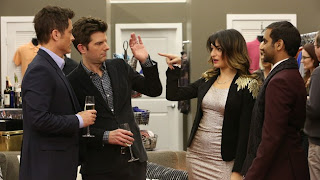 It's been a while since we've had a good Ron vs. Leslie episode, and as a result, this felt very much like a pleasant throwback to the show's early days. Plot-wise, it was let down a little bit by the fact that it took so long for Leslie to come up with the ultimate solution to the problem (having the city host a culturally-relevant movie night instead of leaving that job in the hands of a private business), but the road to get there was humorous enough that it's just a minor nitpick.

Other Thoughts
I didn't mind Jenny Slate as Jean-Ralphio's sister (it's an especially inspired bit of casting), but I really hope she's just a one-off or semi-recurring character. I think pairing Tom up with her long term would be a huge step back for the character.

I've always enjoyed the April/Ann relationship, and their forced friendship gave Rashida Jones some great moments to play in this episode. And that "Time After Time" capper, especially Donna's sudden entrance at the end, was just fantastic

The sight gag of Chris and Tom sitting next to one another on the gigantic couch (and Tom's reaction to it) was fantastic.

Perd Hapley gave E.T. 1 1/2 stars for being "not believable." As someone who is not a huge E.T. fan, I love Perd even more now.
Newer Post Older Post Home
Posted by Austin Gorton at 10:30 AM