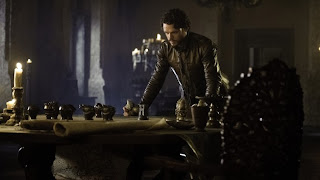 Riverrrun
Oh, Robb, you are your father's son, adhering strictly to the honorable course even to your detriment. I worry that the end result will be the same...

Nevertheless, seeing Robb back in military strategy mode and the suggestion of some payoff to his deal-breaking wedding last season made this one of the more enjoyable Robb outings all season.

North of the Wall
Just a quick check-in here, as the detachment of Wildlings continues on towards the Wall, and Jon takes a break to explore some caves.

I'm fairly certain he's lying about the number of men at Castle Black (a thousand seems like too large a number even before their recent decimation, which of course Jon doesn't know about), but I'm not sure what his endgame is. He's obviously not going to scare the Wildlings away before they reach the wall, and it will become pretty clear once they arrive how understaffed the place is.

Realizing it's a big deal for Jon to break his celibacy oath (especially since he too is a son of Ned Stark), it makes him more fun to watch when he's willing to cut loose a little bit.

Harrenhal
Though the broad strokes of what Jamie revealed during his fantastic monologue in this episode had been established before (we knew, for example, that the Mad King's last words had been "burn them all"; also, as Dr. Bitz poined out, he was known as the Mad King, so, you know, it isn't like Jamie killed the Just King or the Cuddly King), it was still satisfying to hear the details of what exactly led Jamie to become the Kingslayer, reinforcing the notion that he didn't do it for personal gain or at the request of his father, but rather to spare the people of King's Landing. It underlines the previously suggested notion that is a guy who broke an oath for what he believed to be heroic reasons, yet was immediately branded some combination of villain, opportunist and dishonorable for it.

This is still the guy who casually pushed a kid out a window in the first episode of the series, and it's tough to get past that, but it's amazing how much sympathy the show has built around the character in the last few episodes (and even if you can't past the attempted murder of a child, he's at least become a much more richly developed, three-dimensional character of late).

As a testament to how much my attitude toward Jamie has changed, I found myself relieved by Roose Bolton's "treat our prisoners with respect" attitude, compared to the casual bullying dished out by Locke.

The Fiery Batcave
All this Lord of Light business continues to inject the show with the most overt uses of magic: last season, we had creepy smoke monster babies, now we have magically burning swords and straight-up resurrections.

Not for nothing is this series of books called "The Song of Ice and Fire"; we've already seen that the "ice" side of things can raise the dead, via the White Walkers; now we see that "fire" can do the same, with much better results.

Not only is lighting your sword on fire a pretty neat trick, but also kind of a dick move when you're fighting a guy who is afraid of fire (not that the Hound is all that deserving of our sympathy).

Nice to see Arya's "who I want to kill" mantra return.

What are the odds that Beric will deliver Arya to Robb at Riverrun without incident, and Arya will be back with her family by the end of the season? I'd say pretty close to zero.

Dragonstone
Simply by virtue of the fact that Joffrey is such an  insufferable monster and Stannis has the strongest claim to the throne, I want to see him succeed, but man, he is not an easy guy to like. This episode, we meet his creepy wife and her fetus jars (what is it with genre shows featuring bodies in jars? See also: The Walking Dead), someone who could give Lyssa Arryn a run for her money in the "whacked out of her gourd" category, as well as his daughter, who looks like she might be half-Cardassian and is kept locked up for unrevealed reasons. It's nowhere near the level of "watching a whore get beaten to death for his amusement", but man, it's getting tougher and tougher to really root for Stannis.

Davos also made an appearance; glad the show isn't done with him yet.

Yunkai
Just a quick check-in with Dany this week, as she learns that ordering someone to be free isn't as easy as it sounds (and is somewhat oxymoronic). Meanwhile, Jorah and Barristan continue their quiet jockeying for position in Dany's future kingdom. It's interesting that Barristan, who professes a desire to simply server a monarch worthy of the title, remains worried about how Jorah's past will play at Dany's future court, despite all that Jorah has done for her and his professed loyalty. It has a feel of Barristan still playing by the old rules, which don't quite apply when you're serving a monarch-in-exile, while also being a clear attempt to usurp Jorah's current standing with Dany.

Kings Landing
Putting Lady Olenna and Tyrion in a room together turned out to be as fun as one would have expected, but the real high point was the complete 180 Cersei made at the end of the episode, going from smug satisfaction over Tyrion's betrothal to outrage over her own in an instant, a transformation wonderfully played by Lena Headley.

Charles Dance continues to kill it as Tywin.

Also, Littlefinger, aside from ratcheting up the creep factor by about ten when talking with Sansa, has found himself in an interesting position, (more or less unintentionally) pitting the Lannisters and Tyrells against one another. The whole "marry Sansa off to Loras" plot was motivated by a genuine desire to keep her from marrying Littlefinger (something the Lannisters are presumably unaware of). And yet, because Cersei went to Littlefinger for intel, he is now aware of both sides' interest in the girl. Then there is his own (creepy) interest in her, something which remains unknown to the Lannisters. Wheels within wheels...

Other Thoughts
Not all episodes of this show have a strong overarching theme connecting the various snippets of the story, but this one did, and it seemed to be "breaking oaths and taking baths".

No Joffrey, Bran, Theon or the remnants of the Nights Watch.

Yunkai is added to the opening credits, though I was disappointed that Astapor hadn't been changed into a smoking ruin.
Newer Post Older Post Home
Posted by Austin Gorton at 12:00 PM