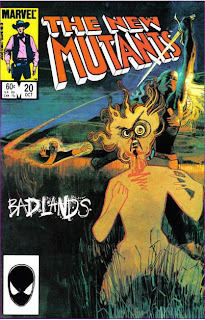 In a Nutshell
The New Mutants defeat the Demon Bear.

the writer: Chris Claremont
the artist: Bill Seinkiewicz
the letterer: Tom Orzechowski
the colorist: Glynis Wein
the editor: Ann Nocenti
the editor who is much taller, and coincidentally, Chief: Jim Shooter

Plot
In the Demon Bear's domain, a dimension which resembles an untainted American West, the New Mutants watch as the bear transforms Officer Tom Corsi and Nurse Sharon Friedlander into American Indian demons. As the New Mutants battle the demons, the bear attempts to pierce Illyana's wards protecting the doctors operating on Dani back in the real world. As the battle rages, the bear grows more powerful and his corruption fills the land. Amara saves Roberto from one of the demons, leaving her open for an attack by the bear, which transforms her into a demon as well. Illyana uses her Soulsword to fight off the bear, then plunges it into the possessed Amara. Believing Illyana has been consumed by her dark side and killed Amara, Sam attacks her, but a restored Amara admonishes Sam, telling him Illyana saved her. As the New Mutants regroup and debate their next move, Illyana convinces Rahne to re-establish her rapport with Dani so they can learn why the bear fears her. As the bear continues to attack Illyana's wards, she uses her Soulsword to destroy the demons possessing Tom and Sharon. 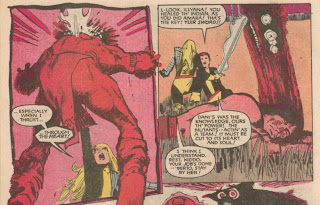 Rahne learns from Dani that Illyana's sword is the key. As Amara distracts the Demon Bear with fire, Sam flies Illyana towards it, where she plunges the Soulsword into the monster's skull, splitting it in two. The bear fades away as two people appear from inside it. Suddenly everyone is back at the hospital. Rahne notices that though freed from demonic possession, Tom and Sharon are still stuck as American Indians, while the two people who emerged from the bear introduce themselves as Dani's parents. Just then, the doctor emerges from surgery, declaring that Dani will survive, but she'll be totally paralyzed. However, back at the mansion, Storm calls on the Morlock Healer to help Dani, and though her recovery will be long and difficult, she will eventually regain full movement. Dani is then reunited with her parents, who explain that they were enslaved and transformed into the Demon Bear by a malevolent entity and forced to hunt down their daughter. Professor Xavier muses that he may need to consult with Dr. Strange on the matter, then expresses how proud he is of the New Mutants.

Firsts and Other Notables
Tom Corsi and Sharon Friedlander are transformed into American Indian demons in this issue, and though Illyana purges them of the demon possessing, they will remain American Indians.

They're not exactly significant characters, but this issue marks the first non-Demon Bear appearance of Dani's parents, William and Peg Lonestar (not Moonstar, for some reason; presumably an oversight), following the revelation that they were magically transformed into the bear. 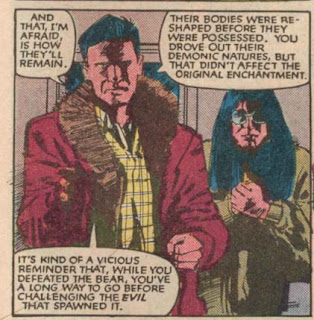 It's never made clear exactly who the entity which enslaved Dani's parents and transformed them into the Demon Bear, though a response to a letter in a future issue will pin it on the Advesary, the mystical antagonist of the "Fall of the Mutants" crossover, whose future machinations were hinted at in Uncanny X-Men #184.

Chronologically, the entirety of "The Demon Bear Saga", including this issue, occurs prior to the events of Uncanny X-Men #184.

A Work in Progress
Rahne continues to be uneasy around Illyana, referring to her as a witch and expressing distrust of her motivations. 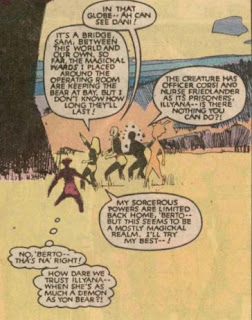 When attacked, Illyana once again manifests protective armor, and this time there's considerably more of it. 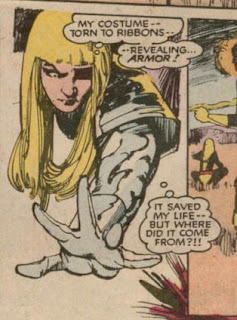 Storm calls on the services of the Morlock Healer to help Dani. 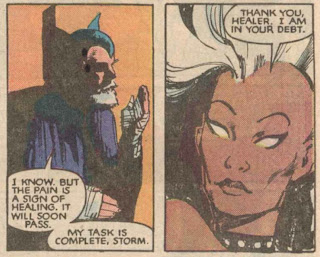 Dani's parents mention that Dani's grandfather cast a protective spell over her which lasted until his death in Marvel Graphic Novel #4, explaining why the bear didn't come after her until she'd come to Xavier's school. 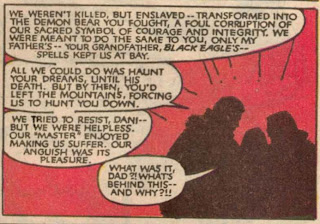 I Love the 80s
Fighting in the bear's extradimensional home, Magma can cut loose with volcanoes without us worrying about the larger implications of such a power. 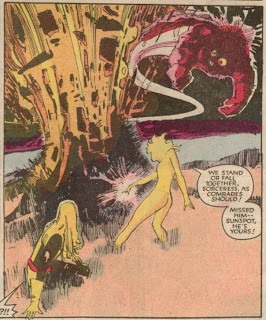 Claremontisms
Sam is thankful that he's invulnerable while blasting, while we're reminded that Illyana's Soulsword is the "ultimate expression" of her magical abilities.

Artistic Achievements
There's a neat bit on a handful of pages in which a grid in the upper left corner depicts the layout of the land, marking the areas where the Demon Bear's corruption has spread, with each grid showing more and more dark areas as the issue progresses. 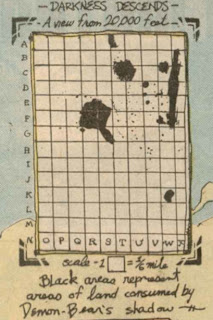 Young Love
Sam flies into a rage and attacks Magik when he thinks she's killed Magma. 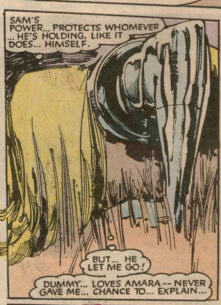 Chris Claremont on the reaction to Bill Sienkiewicz's art
"One of the major benefits of Bill coming on The New Mutants, for example, was that, up until that point, what we had was a book where the letters, the reader reaction was, 'it's very nice.' 'I like it.' 'I don't like it.' 'It's okay.' Whereas after Bill took over, 'I love Bill's stuff.' 'I hate Bill's stuff.'  'He is God's gift to art.' 'When are you going to sharpen his pencil?' 'What you have is a true artist.' 'Why is it that everybody in this book looks like Bill the Cat?' The response got much more extreme. But people got passionately involved in the book. They cared about it. They loved it or they hated it, but everybody talked about it. Everybody was aware of it. And to my mind that's what we are in large measure there to do. Books that people care about, that get them excited and interested, and willing to come back next month to see what happens. A book that someone likes is a book that someone can put down and walk away from. And that's fatal in any publishing form."

Teebore's Take
"The Demon Bear Saga" wraps up, somewhat perfunctorily, as Claremont replaces the atmosphere and mounting tension of last issue with more traditional (and admittedly somewhat requisite) fist-punching superheroics. The payoff to the "Demon Bear fears Dani" subplot also comes up short, as the notion of using Illyana's Soulsword against the creature isn't something all that intrinsic to Dani while, frankly, Illyana shouldn't have needed Dani's help to come up with that idea. It falls to Sienkiewicz then, to livens things up, and he's more than up to the task, taking advantage of the surreal setting to turn in some stunning double page spreads that make great use of open space. He also does a magnificent job in depicting the demonically-possessed Tom and Sharon, rendering them not as traditional reptilian demons but as surreal and genuinely creepy figures in a manner that would only work in a comic book. And while the action sequences are, plot-wise, relatively standard, Sienkiewicz imbues them with enough energy to make them seem fresh and exciting (Amara's volcanoes are particularly impressive). The end result shows that, even when Claremont may falter, Sienkiewicz can elevate the material all on his own.

Next Issue
Claremont and Barry Windsor Smith bring us "Life Death" in Uncanny X-Men #186, while the New Mutants have a slumber party in New Mutants #21.
Newer Post Older Post Home
Posted by Austin Gorton at 8:30 AM