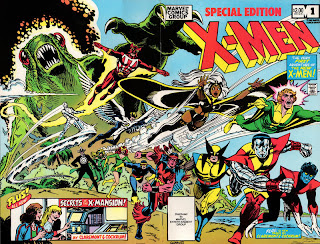 In a Nutshell
Kitty gives Illyana a tour of the mansion.

Plot
Feeling down, Kitty works out in the Danger Room until Illyana joins her. Kitty proceeds to give Illyana a tour of the mansion and its grounds, not knowing they are being watched. When the girls reach the hanger, Kitty notices an intruder alert, and they rush off to investigate. Reaching the living room, Illyana throws Kitty inside, where the X-Men, New Mutants and Starjammers surprise Kitty with a birthday party. 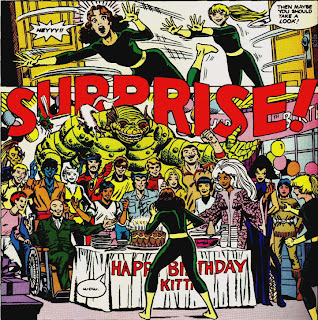 Firsts and Other Notables
The bulk of this issue consists of a reprint of Giant-Size X-Men #1, including a black-and-white reprint of the issue's cover, followed by an original twelve page story. Additionally, there is a text intro from Louise Jones and an unused cover by Dave Cockrum (which was later used for the cove of the issue of Back Issue magazine devoted to the X-Men). The whole thing is 52 pages long, and printed on higher quality Baxter paper.

Published after he'd left the series, this issue represents Cockrum's last regular contribution to X-Men, though he will return to draw Nightcrawler and Starjammer limited series.

Cover dated February 1983 and on sale the same time as X-Men #166 and New Mutants #1, Kitty references both the X-Men's return from space and her parents' divorce, setting the events of the original story after issue #167 and annual #6, yet Kitty makes no mention of her demotion to the New Mutants (presumably because Claremont didn't want to spoil the ending to #167).

More glaringly, no mention is made of the fact that the mansion was recently rebuilt, with several scenes (such as those that depict the characters' rooms containing items likely lost in the destruction of the original mansion) making it seem like Claremont forgot he even destroyed the mansion at one point. Case in point: it is revealed that Nightcrawler has a pet pterodactyl, brought back from the Savage Land, which somehow survived the mansion's destruction in order to reside in the current mansion.

It is revealed in this issue that Kitty and Illyana are now roommates.

A Work in Progress
Part of the surprise in the party the X-Men throw for Kitty stems from the fact that her birthday already occurred while the X-Men were in space.

When Kitty phases through the Danger Room's computers, she doesn't short them out. 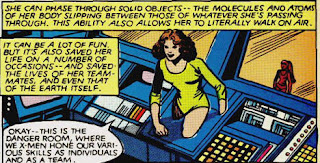 Kitty explains to Illyana, and thus to the readers, how the new Danger Room works. 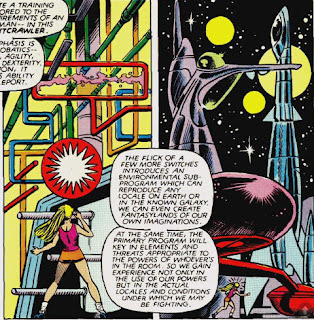 Despite the upgrades to the Danger Room, Cerebro still looks much like it did in the early issues of the series (though we'll eventually learn it was indeed upgraded along with the Danger Room). Kitty also mentions the strain involved in using Cerebro, possibly an attempt on Claremont's part to explain why Xavier doesn't spend more time searching for new mutants. 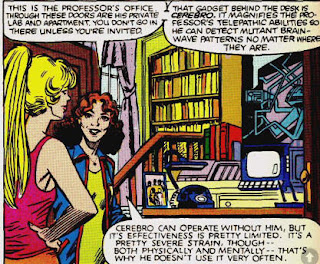 Kitty mentions some vague details about Storm's pre-X-Men past, all of which is, I believe, news to us, and seems like a setup for a future story/flashback, but I don't believe anything comes of it. 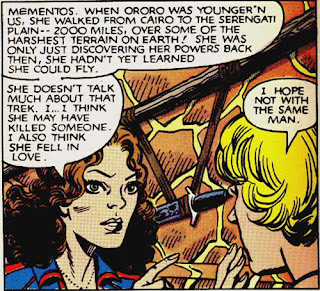 Kitty and Illyana have apparently received training (telepathically or otherwise) in SCUBA diving. 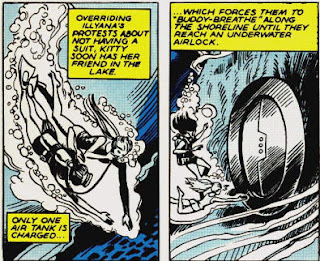 Kitty refers to the Blackbird as "her dragon".

When Kitty talks about her fight with the N'Garai demon in issue #143, Illyana makes a reference to "her demon", reminding Kitty there's a lot they still don't know about Illyana's time in Limbo. 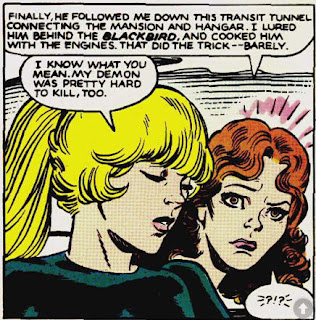 I Love the 80s
This story is chockablock with awkward, stilted, expository dialogue, the kind of stuff no normal person would ever say. 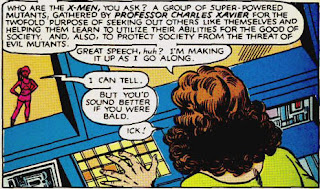 Claremontisms
In one of the more oft-repeated descriptions of Colossus, it's said that he has the soul of a poet who incorrectly believes he lacks the ability to express himself effectively, and it's said in a sentence with another Claremontian device: the interjection of a phrase ("the gift", in this case) in the middle of a sentence. Young Love
Kitty wonders if she's falling in love with Peter (it's also said that he is 19 while Kitty is 14, something which doesn't bother Illyana).

Later, Kitty plants one on Peter at her birthday party. 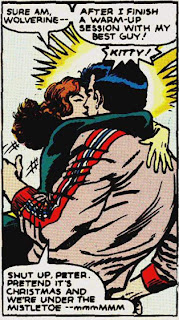 Teebore's Take
In an era without copious trade paperback reprints or easy access to issues online, I imagine the genesis for this issue came from a desire to give X-Men readers, especially the new ones, increasing in number as the popularity of the title grew and a spin-off was launched, the opportunity to see the beginnings of the contemporary X-Men by reprinting Giant-Size X-Men #1 (and, of course, to get them to buy it). Then, to give fans who had already read that issue an incentive to buy the reprint, a 12 page original story was created. But to continue the theme of acquainting new readers, the original story essentially serves as a primer on the X-Men and their base of operation. As a result, it's not terribly good. The dialogue is awkward and loaded with exposition, and Claremont seems to give little effort towards disguising it. Cockrum's art (a few horrid faces aside) is as strong as ever, but he isn't given anything more exciting than some gymnastics routines and empty rooms to draw. As a primer for new fans, it probably does its job just fine, so it gets credit for that. But for longtime fans, especially those of us performing an issue-by-issue analysis of the unfolding narrative (which, granted, no one involved in this issue likely ever imagined happening), the whole thing feels like a tedious afterthought.

Next Issue
Tomorrow we look at the intercompany crossover, X-Men/Teen Titans, before returning to the regular series with Uncanny X-Men #168 next Wednesday.
Newer Post Older Post Home
Posted by Austin Gorton at 8:00 AM