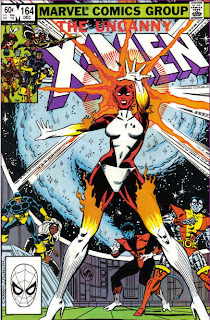 In a Nutshell
As the X-Men fight to escape the Brood, Binary makes her first appearance.

Plot
Aboard Lilandra's spaceship, the X-Men are attacked by the Brood, under orders to disable the vessel and capture the X-Men alive. The X-Men fight back using the ship's meager weapons and their own powers, but the Brood manage to damage the ship's warp engine, preventing the X-Men from escaping. As Kitty dons a spacesuit to effect repairs, Carol is overcome by strange sensations. Though wounded by a stray blast, Kitty manages to fix the engine and the ship jumps to warp, though they lose contact with Kitty in the process. Meanwhile, Professor X and Illyana dine together in the newly rebuilt X-Mansion. Professor X worries that he can't read Illyana's mind, afraid she's hiding something, but is still too grief-stricken to press the matter. Back in space, Kitty awakens on the hull of Lilandra's ship to find Carol, transformed into the cosmically-powered Binary, outside the ship with her, and is told the X-Men managed to escape from the Brood. Bringing Kitty inside, Carol uses her newfound powers to recharge the ship's power cells. 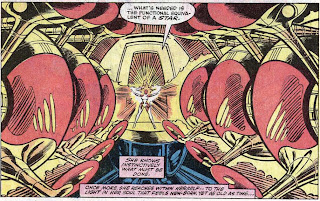 As the X-Men work to repair the damage done by the Brood, Nightcrawler examines the wounded Kitty, and finds her miraculously healed. He and Cyclops try to discuss the matter with Wolverine, but Wolverine storms off. In the shuttle bay, Storm struggles with an apparent lack of control over her powers. Talking about it with Cyclops, she suddenly senses a life inside her. Probing deeper, she realizes the truth and horrified, flees in a shuttle. As the rest of the team gathers in response to Storm's departure, Wolverine finally comes clean and tells the X-Men what he learned on the Brood homeworld: that each of them has been implanted with a Brood Queen egg, and when it hatches, they'll all transform into Brood, dying in the process. In the meantime, the Brood embryos will fight to stay alive, which is why Kitty healed from her injuries so fast. Overcome with rage, Binary blasts out of the ship, swearing vengeance on the Brood, her departure leaving the X-Men exposed to explosive decompression.

Firsts and Other Notables
This is Dave Cockrum's final issue on the title, marking the end of the second Claremont/Cockrum run. He leaves to work on an original series of his own creation, and while that never quite pans out, Cockrum does not return to the title he helped put on the map, though he will contribute to some spin-off X-Men projects down the road (and we'll see his work again in a few weeks when we cover Special Edition X-Men #1, a one-shot published around the time of this issue).

Carol Danvers makes her first appearance as Binary, gaining new cosmic powers thanks to the Brood's manipulation of her genetics. Technically, she now has a connection to a white hole from which she can draw vast amounts of energy that enable her to fly, survive in space, blast things, etc. She is offered a place on the X-Men, but declines, fearing it would keep her too attached to Earth when she wants to be in space. Binary will bounce around the Marvel Universe for the next decade or so, making appearances in various titles before reverting to her old Ms. Marvel identity and getting a streamlined power set in the wake of the Busiek/Perez Avengers re-launch in 1998, eventually getting thrust into the spotlight during Brian Michael Bendis' tenure on the title and receiving her own series once again. 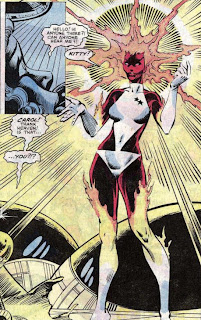 As of this issue, the X-Mansion is completely rebuilt, making it all ready for the arrival of the New Mutants. It's said that Shi'ar robots did most of the work, accounting, at least, for the labor costs as well as the speed of the re-build, and also preventing Xavier from having to wipe any contractors' minds of the superhero-y stuff. As a result, this is considered to be the point at which the mansion is integrated with "advanced Shi'ar technology", which will eventually allow for depictions of a more sophisticated computer system, Danger Room and Cerebro.

To a lesser extent, the Brood's star sharks, organic space ships smaller than their whale-like Acanti vessels, appear for the first time, though they go unnamed.

A Work in Progress
Colossus comes down on the side of not killing the Brood, while Cyclops makes a point to only stun the ships attacking Lilandra's yacht. 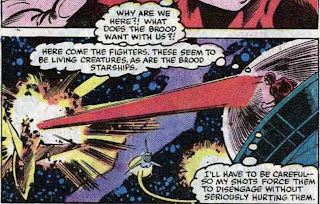 Storm, after losing control of her powers and accidentally killing a Brood ship, is unwilling to fight back, even to save Kitty's life, fearing she will kill again. 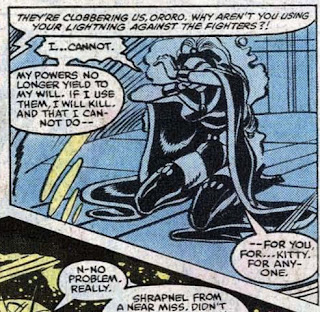 Appropriately enough, the spacesuit Kitty dons to help repair the ship matches the one Lilandra wore when she first appeared on Earth during Cockrum's first run on the book.

Though frightened, Kitty feels she's earned her place on the team and is now determined to prove it. 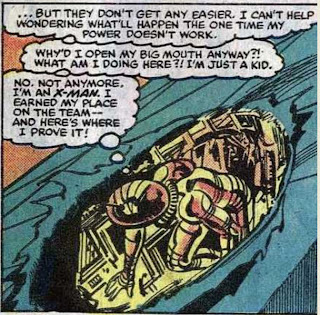 Storm fears she is losing touch with her essential self. 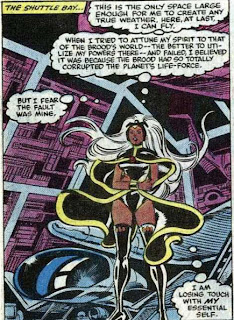 Later, Storm is able to sense the life growing in her, and is somehow able to communicate with it enough to realize it's a Brood egg, at which point she promptly freaks out. 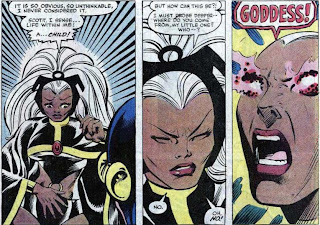 Xavier is still mourning the apparent loss of the X-Men. 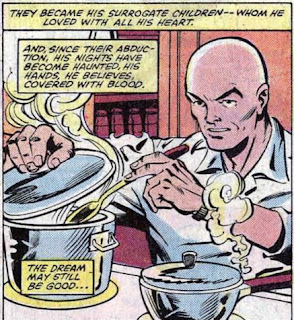 Illyana is shown wearing the medallion containing the Bloodstones from issue #160. It's established that Xavier has telepathically taught Illyana English. Illyana also asks Professor X if she's a mutant, saying she can "do things". 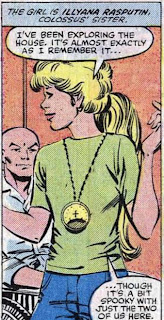 Professor X says that Moira is away from the school, but this couldn't account for her appearance in Scotland in Marvel Graphic Novel #4, as she returns from Scotland with Rahne, and when she appears next issue, which takes place before MGN #4, it will be sans Rahne.

I Love the 80s
The opening splash page features the classic "floating heads" technique, depicting the main characters looking in on the action. 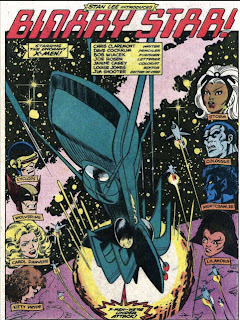 Conveniently enough, Lilandra's ship is able to produce a ruby quartz bubble to allow Cyclops to blast the Brood ships. 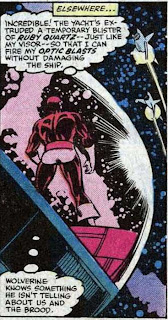 When Kitty is told she's have to go outside the ship to effect repairs, a footnote helpfully defines EVA as "extra vehicular activity" for us.

"Professor Xavier is a Jerk!"Professor X tells Illyana that a telepath should never use his powers to pry, then exactly one panel later, notes he is unable to pry into Illyana's mind. 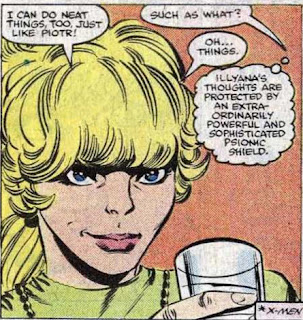 He also wonders what he might be able to do to help the girl, then ultimately decides he doesn't care. 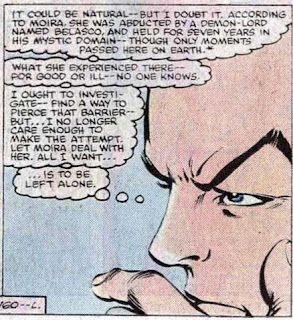 For Sale
This ad for the latest round of Saturday morning cartoons features at least three I've never heard of before. 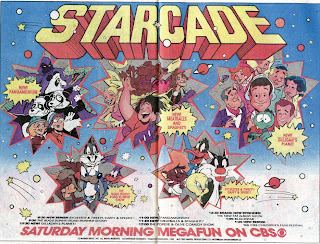 It's in the Mail
A letter in this issue confirms that S'ym, Belasco's assistant from issue #160, was meant to be a parody of Dave Sim's Cerebus title character.

A response to a letter mentions Marvel Graphic Novel #4 going on sale in the fall, which is accurate but funny, considering it was on sale at the same time as this issue.

Dave Cockrum on leaving X-Men
"I got the okay to do the Futurians graphic novel, a pet project of mine. I'd given Shooter the proposal and it sat on his desk for about a year, and then finally he says, "yeah, you can do it if you want to." I was at a plotting session with Chris and Louise and I mentioned I got the okay to do Futurians. They asked me what it was, and I started describing the project and got so excited that I was jumping up and down and waving my hands around. According to Chris, he and Louise kind of decided there and then that I was more interested in Futurians than X-Men and sort of talked me into leaving. I think Chris decided he might be able to get a more manageable artist if I was off doing something else. I know they were panicky for about a week because nobody would take the book. Nobody wanted to handle that crowd of characters. They finally got Paul Smith. He agreed to do X-Men for a while if the company agreed to let him do Dr. Strange later on. Of course, this is just before the company started paying royalties. Nobody considered the kind of money that was going to be coming in. The creators got huge amount of royalties out of X-Men later on."

Teebore's Take
Smack dab in the middle of his Brood arc, Claremont debuts a new superhero identity and power set for his long time favorite, Carol Danvers. It was clearly something Claremont had been building towards for awhile, porting the character into X-Men's supporting cast after her book was cancelled, wiping her slate clean via the attack by Rogue, and then positioning her to get captured with the X-Men by the Brood. In a lot of ways, the transformation of Carol into Binary reads like an attempt by Claremont to undo the damage done to the character via her battle with Rogue in Avengers Annual #10, except that Claremont was the writer of that story as well. Instead, it seems like Claremont was genuinely interested in moving Carol forward as a character, and simply looked for (and found) an opportunity to give her a new direction.

Meanwhile, Claremont continues his examination of the X-Men's morality as the rest of the team weighs in on whether or not the Brood deserve to be killed. While Wolverine and Carol feel lethal force is justified, Colossus and Cyclops remain reluctant, and Storm goes so far as to freak out when she accidentally kills some Brood. But, as Wolverine finally tells the rest of the X-Men about the Brood eggs inside them, the nature of the discussion is poised to change, as the X-Men must now confront their own impending mortality.

Next Issue
Tomorrow: New Mutants #1 kicks off the spin-off era for the X-Men.