Retro Review: Marge vs. the Monorail 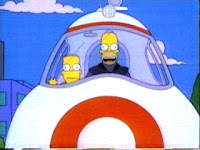 Or the One Where
Springfield disastrously builds a monorail.

The Setup
After Mr. Burns is fined for dumping toxic waste in the city parks, the town debates what to do with their sudden windfall, ultimately agreeing to pay a slick salesmen to build the town a monorail.

Notable Notes
This episode was pitched and written by Conan O'Brien, and he has cited it as his favorite episode of the episodes he's written.

Phil Hartman provides the voice of monorail con man Lyle Lanley, and though this character never reappears nor rises to the ranks of Lionel Hutz and Troy McClure, Hartman unsurprisingly does a great job with the part.

The producers originally wanted Leonard Nimoy to appear as the Grand Marshall for the monorail's maiden voyage, but they assumed he wouldn't be interested. Instead, they asked George Takei, and when he ultimately declined, they asked Nimoy, who agreed after all.

A washed-up Lurleen Lumpkin, from "Colonel Homer", is one of the celebrities in attendance for the monorail grand opening.

Favorite Quotes
Mayor Quimby: We're twice as smart as the people of Shelbyville. Just tell us your idea, and we'll vote for it

Marge: I still think we ought to spend the money to fix Main Street.
Homer: Well, you should've written a song like that guy.

Homer: Do you want to change your name to Homer Junior? The kids can call you Ho-Ju!
Bart: ...I'll get back to you.

Marge: According to this book, the monorail goes over 150 miles an hour! What if something goes wrong? Homer: "'What if.'" What if I stepped in the shower and slipped on a bar of soap? ... Oh, my God! I'd get killed!

Marge: There's a man here who says he can help you.
Homer: Is it Batman?
Marge: He's a scientist.
Homer: Batman's a scientist.
Marge: It's not Batman! 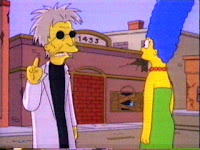 Teebore's Take
Like "Mr. Plow", this is another indisputable classic, routinely cited by fans, creators and critics alike as one of the show's all time best episodes. Though Homer is named conductor of the monorail (because this is a show about the Simpsons after all) and Marge is the driving force of the plot, this episode is really one of the first Simpsons episodes that's about the town of Springfield itself. Though previous episodes have given the spotlight to supporting characters like Principal Skinner or Otto, this is the first time we really start to get a sense of the town as a home to all these screwball characters, and how the collective consciousness of those characters lends itself to the character of the town itself, a place that would build an escalator to nowhere. It also features one of the show's best musical numbers, a Music Man-inspired pitch for the monorail that includes the line, "sorry mom, the mob has spoken!". But what really makes this episode a classic is that it is simply crammed full of jokes from end to end. Barely a minute goes by without something hilarious occurring, whether it's a throwaway visual gag or a more layered piece of satire, and all of the jokes are woven seamlessly into the plot. In that regard, it is one of the most well constructed and well executed episodes in Simpsons history. 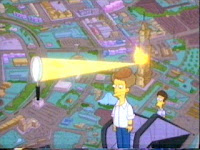