To Better Know A Villain: Bane 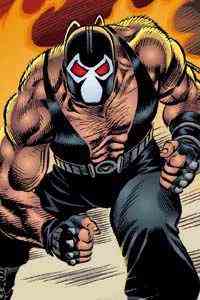 This Friday sees the release of The Dark Knight Rises, the third film in Christopher Nolan's acclaimed Batman trilogy, featuring Christian Bale as Batman and Captain Picard's clone as Bane, that guy in the trailers with the speaker over his mouth you couldn't understand very well at first, but now can. With the film poised to make all the money, ever, and since, relative to the likes of the Joker or Penguin, Bane is a pretty unknown Batman villain, I figured he was worthy of some discussion (and also be sure check out Dr. Bitz's 100% accurate rundown of Batman himself here. Don't forget to click on the pictures).

Powers and Abilities
Bane has trained himself to peak human physical condition, and when augmented by the drug Venom, his strength, speed, agility and durability is pushed to super-human levels. Bane also possess a genius-level intellect and is a master strategist and martial artist. 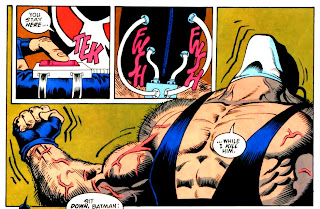 Weaknesses and Achilles’ Heels
An addiction to Venom, deep-rooted bat-based fears, a fondness for the daughters of immortal cavemen super-villains. 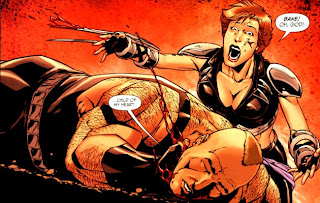 Gadgets and Accessories
For a time, Bane wore a control mechanism on his wrist which dispersed Venom throughout his system via hoses connected to ports in the back of his skull. He also rocks a mean luchador mask. 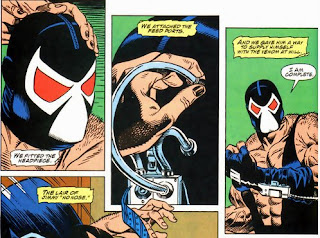 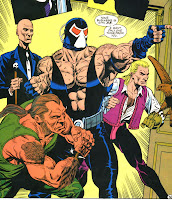 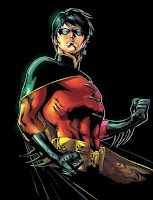 Movies and Appearances
Bane appeared in one episode of Batman: The Animated Series, as well as 1997's camp-tastic Batman & Robin, as Poison Ivy's Hulkish lackey. Neither appearance was a very good representation of the character. 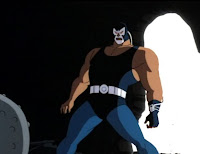 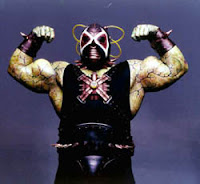 Tom Hardy, of course, plays Bane in The Dark Knight Rises, and while he has (not surprisingly) lost the luchador mask, at least based on the trailers, this version of the character seems more in line with the scheming, "big picture" villain of the comics. 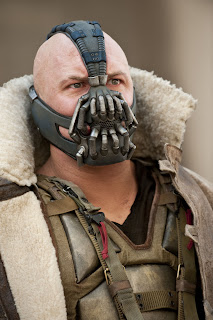 One-Sentence Origin
Born and raised in the Pena Dura prison in Santa Prisca for crimes his father committed, haunted by nightmares of bats, Bane trained within the prison to hone his mental and physical abilities before escaping and journeying to Gotham City, determined to destroy Batman.

Memorable Moment
Batman #497: The culmination of Bane's plan against Batman, as he defeats the weakened hero inside Wayne Manor and breaks his back. 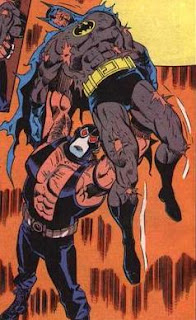 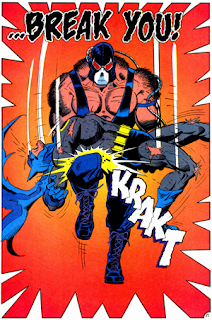 Fun Fact
For a brief period of time, Batman and Bane believed Bane to be Batman's half-brother, the son of Thomas Wayne and a Santa Priscan woman. Though the evidence suggesting as much was ultimately refuted, it did lead to Bane fighting at Batman's side for a time. 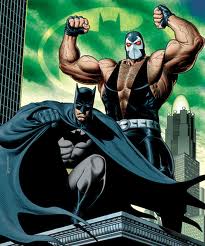 Teebore's Take
The 90s were a weird time for comics. Sales of books, steadily climbing since the 80s, reached new peaks, helped in part by a booming speculator market of casual and new fans who were determined, having realized those old comics they read as kids were worth serious money now, to stockpile "the next big thing" in order to pay for their kids' college educations down the road. At the same time, you saw a rise in popularity of "grim 'n' gritty" characters, tough antihero types who made the hard decisions and took no prisoners, as well as a shift away from the writer to the artist as the dominant half of the creative team, with the vast majority of the superstar artists at Marvel and DC defecting to form their own company, Image Comics, and publish comics with an emphasis on style over substance, the pages filled, for a time, with grim 'n' gritty characters wielding guns, swords, and a ludicrous number of pouches. 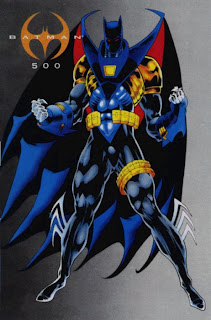 Partially in response to the "darkening" of superhero comics, partially in an effort to attract speculator sales by publishing big events, and partially to attract Image fans looking for ludicrously-pouched characters, DC responded to these changes with a pair of events: 1992's "Death of Superman" and 1993's "Knightfall". The former dealt with, appropriately enough, the death of Superman while the second involved Bruce Wayne having his back broken and passing on the mantle of Batman to a darker, edgier hero who replaced the traditional Batman costume with "kewl" armor. Both acts were carried out by villains, Doomsday and Bane, created specifically to serve as the antagonists of their respective events (of course, while the marketing department was touting these big changes to the status quo, the creators behind the events were using them to affirm the importance of their "old-fashioned" heroes; at the end of the day, the point of "Knightfall" was that not everyone could be Batman, and that Bruce Wayne, traditional he may be, was the best man for the job). 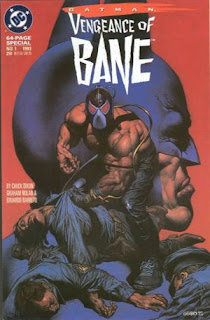 As a result, Bane has always a suffered a bit through comparisons to Doomsday, the monosyllabic creature who punched Superman to death. Though both were created for similar purposes, the two are vastly different characters. Doomsday is little more than a monster, a creature created simply to be able to match Superman's raw strength. Bane, on the other hand, functions as a dark mirror of Batman. Like Batman, Bane is smart, driven, and an excellent fighter. Under different circumstances, Bane could have been Batman. Like Batman, he is also a planner. Just as Batman constantly prepares for a variety of contingencies, Bane thought out and carefully orchestrated his plot against Batman, using various villains as his unknowing pawns, wearing down Batman before striking when the hero was at his weakest. Dirty pool, but it ensured Bane victory, just as Batman feels no compunction to play fair with criminals. 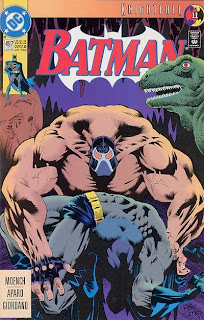 Bane, then, is a far more interesting and well developed character than the one-dimensional Doomsday, and while both have made subsequent appearances following their big event debuts, Bane has managed to stick around as a significant, albeit sparingly-used, member of Batman's rogue's gallery (after all, there's a certain cachet to being the guy who broke the Bat), having somewhat transcended his origin as the driving force of a 90s event, whereas Doomsday remains little more than a footnote in DC history. Bane recently spent a good chunk of time as part of a mercenary team in Gail Simone's delightfully macabre Secret Six series, and has appeared in DC's relaunched "New 52" resembling his appearance in the Arkham Ayslum video game. But I wouldn't be at all surprised if the likely success of The Dark Knight Rises leads to a higher profile for the character once again. Despite his genesis in a 90s event crossover, in the right hands, that wouldn't be a bad thing at all. 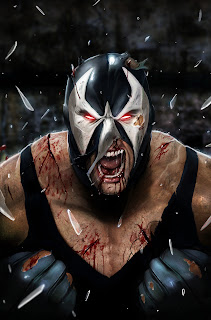