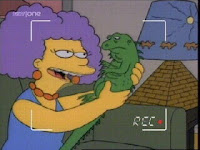 Or the One Where
Aunt Selma takes Bart and Lisa to the Duff Gardens amusement park.

The Setup
Inspired by the death of a childless aunt, and contemplating artifical insemination, Selma agrees to take the kids to Duff Gardens after Homer gets food poisoning from a rotten sandwich.

Notable Notes
This is the first appearance of Jug-Jug the iguana, who becomes Aunt Selma's pet (and fills the void in her life).

For the scene in which the family watches Aunt Gladys' video will, Julie Kavner performed five different voices (Marge, Patty, Selma, their mother, and Gladys).

Quotable Quotes
Marge: The funeral's in Littleneck Falls. I'm afraid we'll have to go to Duff Gardens some other time.
Lisa: We understand.
Bart: No use complaining about something you can't change.
Homer: But I want to go to Duff Gardens. Right now!
Marge: Homer, quit pouting.
Homer: I'm not pouting. I'm mourning. Stupid dead woman.

Marge: You've been eating that sandwich for over a week. I think the mayonnaise is starting to turn.
Homer: Two more feet, and I can fit it in the fridge!

Officer: We found this one swimming naked in the Fermentarium.
Lisa: I am the Lizard Queen!
Doctor: Give her this...and this...and then these all of these.
Selma: Thank you, doctor.
Doctor: Oh, I'm not a doctor.

Teebore's Take
While rarely mentioned in the same company as "Mr. Plow" or "Marge vs. the Monorail" as an automatic classic, this is one of my favorite episodes. Featuring the show's first attempt to parody Disneyworld, the final act, alternating between Bart and Lisa's antics at Duff Gardens and Homer and Marge's debauchery at home makes for one of the funniest sustained ten minutes in the show's history, capped off by Lisa's memorable freakout (triggered by drinking the water in the "It's A Small World"-esque ride) in which she declares she's the Lizard Queen. The first act contains some strong material as well, as we get a couple of different set pieces (the Simpsons on a road trip, the Simpsons at a funeral), and, of course, there's also the flashback to Homer's conquest of the massive sandwich, and his inexplicable inability to throw it out once and for all. Great stuff throughout, but it's really all the antics at Duff Gardens that put the episode over the top.

While not an automatic classic, this is still one of my personal favorites, and a good showcase for Aunt Selma. 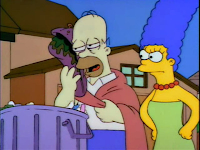