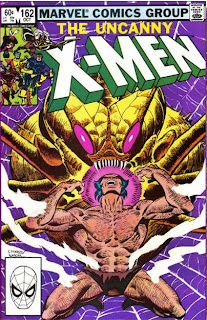 "Beyond the Farthest Star"
October 1982

In a Nutshell
Wolverine fights the Brood solo.

Plot
Wolverine, bloody and alone, races through an alien landscape. He's attacked by a plant which sprays him with hallucinogenic gas. He imagines himself horseback riding in Japan with Mariko before they are attacked by two Brood warriors. Coming to his senses, he realizes the Brood are real. He fights them off, but gets ensnared in a massive web. As his body is wracked by sudden, tremendous pain, he remembers the party Lilandra had thrown for the X-Men aboard her ship, and being knocked unconscious by the Brood. When he awoke, he was somewhere else, surrounded by the Brood, but the X-Men weren't aware of them, trapped in an illusion. His intellect and his senses in conflict, Wolverine alternately accepted the peaceful scene along with the X-Men and reacted with horror as he and his teammates were seemingly attacked by the Brood. 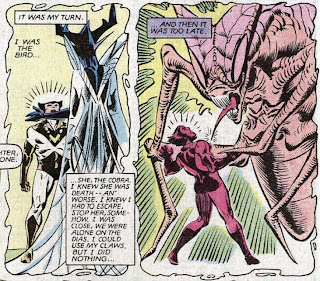 Awakened by the memory, Wolverine frees himself from the web. He then recalls the previous night, coming to in what he believed to be Lilandra's palace but which he quickly realized was the Brood homeworld. Unable to snap Storm out of the illusion, he crept out of the palace. Wolverine watched as the Imperial Guardsmen Fang transformed into a Brood when the egg implanted inside him hatched, and Wolverine realized the X-Men were facing the same fate. Snapping out of his reverie, Wolverine is attacked by a cadre of Brood. Flying into a berserker rage, he fights them all off, but then his body is overcome by pain, and he realizes the egg inside him is trying to hatch. The process slowed by his adamantium bones, his healing ability is able to finally overcome the egg, treating it like a virus. The next morning, Wolverine awakens from the ordeal and declares that he will find his friends, and if they can't be cured, he'll kill them all.

Firsts and Other Notables
In response to his growing popularity and as a companion to his first limited series (on sale at the same time), this issue marks the first time Wolverine receives the spotlight in X-Men for the duration of the issue. More on that below.

Wolverine refers to the Brood as sleazoids for the first time in this issue, a nickname which will be (somewhat irritatingly) picked up by the other members of the team in due time and used synonymously with "Brood" for the name of the alien race. 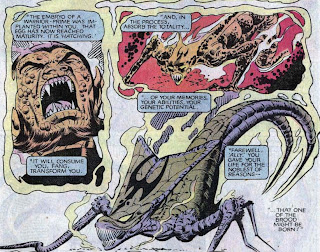 The body of the Acanti alien (still unnamed) that comprises a fantastic two page spread in this issue will feature in the resolution to this story a few issues down the road. 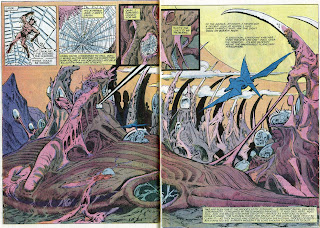 A Work in Progress
In the flashback to the events leading up to the Brood attack last issue, Colossus is seen worrying about llyana. 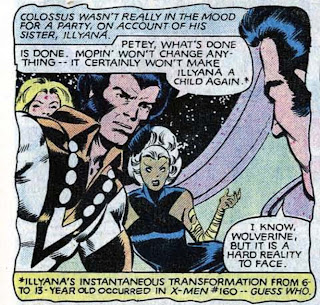 In that flashback, Storm is also ruminating on the events of issue #160, and her Limbo counterpart who displayed an aptitude for sorcery. 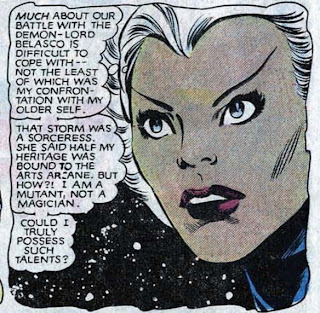 During the "implantation" flashback, which is presented via the illusion the Brood are using to placate the X-Men during the process, it is noted that Carol Danvers is separated from the X-Men. 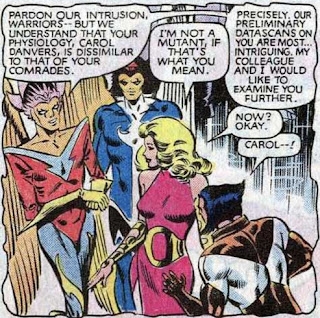 Wolverine refers to Lilandra as "Lil" throughout this issue, a nickname I don't believe is ever used again.

Claremontisms
It's noted that of all the X-Men, aside from Wolverine (whose mutant powers gives him an edge), Kitty is the only other person who senses a wrongness in the Brood's illusion and momentarily fights against being implanted with a Brood egg. Though she ultimately gives in, it's another indication of Kitty's increasing "Mary Sue" qualities.

Artistic Achievements
In addition to the great two page spread above, Cockrum turns in fantastic one page spread of Wolverine in all his berserker glory. 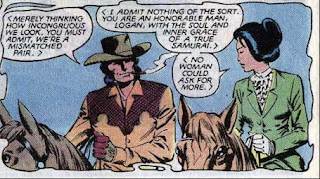 The Best There Is At What He Does
Though coined in the first issue of the Wolverine limited series that hit stands the previous month, Wolverine's famous catchphrase, "I'm the best there is at what I do, but what I do best isn't very nice" is used in X-Men for the first time in this issue.

Wolverine notes that he considers Japan a second home to him.

On his way out of the Brood palace, Wolverine stops to try and wake Kitty, a further indication of the bond developing between them.

Wolverine's adamantium bones prevent his body from transforming when his Brood egg hatches, and serve as an anchor for his healing factor, allowing it to purge the egg like an infection.

For Sale
The back cover features an add for the Empire Strikes Back Atari game, one of the first video games to be advertised in X-Men. 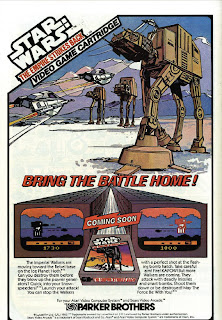 It's in the Mail
Cockrum's departure from the title, as of issue #164, is announced via the response to a letter. He is said to be leaving to work on an original concept called the Mysterians (which will eventually be published in Marvel Graphic Novel #9 under the name The Futurians, before Cockrum takes the concept to independent publisher Lodestone Comics, where only three issues of a series would be published). I've never read it, but it sounds like it could be kinda fun.

Several letters in this issue react to Colossus' apparent death at the end of issue #155 in a manner which suggests at least some readers genuinely thought Colossus had died and wouldn't turn up alive in the next issue. 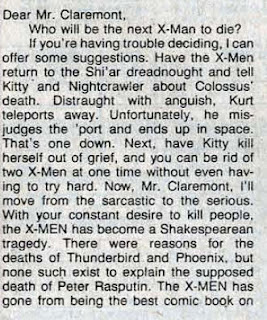 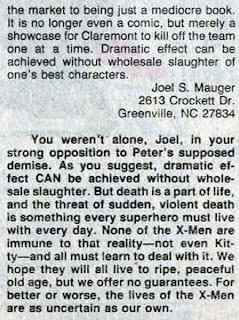 Finally, there's a letter discussing Cyclops' age, which serves as a nice snapshot of the issue with the passage of time in comics. 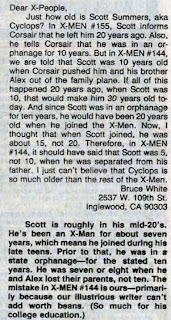 Teebore's Take
Following last issue's cliffhanger, Claremont and Cockrum dive right back into the Brood story with gusto. In some ways, this is the most modern, forward-looking issue of X-Men yet. In addition to being the first issue to spotlight Wolverine (setting the stage for countless more Wolverine spotlight issues, guest appearances and ongoing series), Claremont presents the entire issue from Wolverine's perspective, writing narrative captions in the character's voice, rather than the voice of an omnipresent narrator. While that trick had been done before (most notably in Wolverine's limited series), rarely had it been employed on such a scale in X-Men as in this issue. Nowadays, the first person narrative caption is the dominant technique used in comics to get inside a character's head, having all but replaced the more traditional thought bubble in most modern comics.

As a result, this issue likely succeeds or fails depending on your appreciation/tolerance for Wolverine. With the character's popularity on the rise, this was likely exactly what many fans at the time wanted to see: a chance for a fan favorite to cut loose on his own for the first time. For modern readers, reading it in an era over-saturated with Wolverine appearances, it is likely a lot more tedious. The narrative captions, groundbreaking at the time and likely captivating for the first time audience, are filled with the kind of tough talk that has become old hat (even cliche, in some cases) for readers of Wolverine's adventures by now. The art brings a lot of energy to the issue, though Cockrum's knack for the fantastic (along with some especially bright colors) doesn't give the alien jungle the savage sci-fi edge the narration suggests, and the story needs, to sell Wolverine's peril.

Through no fault of its own, this is an issue that, while groundbreaking, hasn't aged well, as the ground it broke has become more and more well trod. It still manages to tell an intense story that returns the Brood saga to the foreground of the book in a unique and compelling way (even the flashbacks we see bridging the gap between last issue and the opening 'in media res' pages of this issue are false; at no point in the story do we ever see the actual implantation of the X-Men, Claremont wisely leaving that horror to the readers' imaginations), but with the law of diminishing returns having kicked in, it's tough to get too excited about it on a revisit.

Next Issue
The X-Men make a daring escape from the Brood.

And then, next Thursday, we'll look at Marvel Graphic Novel #4, the first appearance of the New Mutants!
Newer Post Older Post Home
Posted by Austin Gorton at 10:00 AM