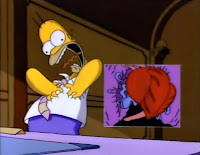 Or the One Where
Homer undergoes open heart surgery

The Setup
After a series of heart attacks brought on my unhealthy eating and stress, Dr. Hibbert tells Homer he will need to have a triple bypass.

Notable Notes
The Cops parody that opens the episode was added to increase the run time of the episode.

Homer tries to explain the medical procedure he needs to the kids using Akbar and Jeff puppets, characters from Matt Groening's Life in Hell comic strip.

Homer's line when he his heart first stops ("just...working...the...turkey through") is one of those lines that's entered my personal lexicon, said when I have heartburn or a stomach ache. And Homer's insistence that should he die Marge should stuff him and put him on the couch as a constant reminder of their marital oath is something I've asked Mrs. Teebore to do several times, but I have a suspicion she's not game for it...

Favorite Quotes
Burns: Look at that pig. Stuffing his face with donuts on my time! That's right, keep eating...Little do you know you're drawing ever closer to the poison donut! There is a poison one, isn't there Smithers?
Smithers: Err...no, sir. I discussed this with our lawyers and they consider it murder.
Burns: Damn their oily hides!

Marge: Can't you do something for him?
Hibbert: Well, we can't fix his heart, but we can tell you exactly how damaged it is.
Homer: What an age we live in!

Homer: Don't worry, Marge. America's health care system is second only to Japan, Canada, Sweden, Great Britain, well, all of Europe, but you can thank your lucky stars we don't live in Paraguay!

Bart: Nothing you say can upset us. We're the MTV generation.
Lisa: We feel neither highs or lows.
Homer: Really? What's it like?
Lisa: Ehh.

Apu: Poor Mister Homer. Could it be that my snack treats are responsible for his wretched health? Customer: I need some jerky.
Apu: Would you like some vodka with that?
Customer: Oh, what the hell, sure. 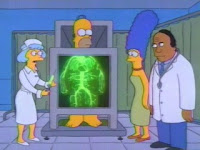 Teebore's Take
Another righteously funny classic, and one of the last times that Homer's health is taken seriously (along with the family's financial woes). Despite the serious subject matter, the script for this episode does a lot to lighten the mood, and it's packed with tons of great lines (I could have easily doubled the "Favorite Quotes" for this episode), a strong turn by Dr. Nick Rivieria, and some humorous commentary on the state of healthcare that's sadly as relevant today as it was in 1992. There are also some genuinely sweet moments, as Homer and the family grapple with his mortality. Despite the implied invincibility of the lead character in an animated sitcom, those moments do a fantastic job of making us worry about Homer even while we're laughing; after all, we know he'll pull through, but his family doesn't.

A relatively realistic take on Homer's health that also manages to be incredibly funny, featuring tons of classic lines. 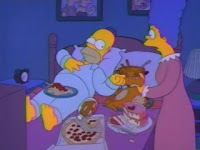