Or the One Where
Homer starts a snow plowing business

The Setup
After wrecking his car driving home on a snowy night, Homer decides to replace it with a plow.

The famous Mr. Plow jingle (which I often sing to my dog Poe, replacing "plow" with his name) is based on an old Rotor-Rooter jingle, and this episode makes allusions to a variety of films, including Dr. Jekyll and Mr. Hyde (Barney's beer-induced transformation), The Godfather (Bart getting pelted by snowballs), and Raiders of the Lost Ark (the melting snowmen).

Technically, this is another "Homer gets a job" episodes, though you don't hear it discussed in that context very much.

Favorite Quotes
Agent: Now, before I give you the check, one more question. This place "Moe's" you left just before the accident. This is a business of some kind?
Homer: [thinks] Don't tell him you were at a bar! Gasp! But what else is open at night? [aloud] It's a pornography store. I was buying pornography. [thinks] Heh heh heh. I would'a never thought of that.

Crazy Vlaclav: She'll go 300 hectares on a single tank of kerosene.
Homer: What country is this car from?
Crazy Vlaclav: ...it no longer exists.

Homer: Gasp! Adam West! Kids! Batman!
Lisa: Dad, that's not the real Batman.
Adam West: Of course I'm the real Batman. See, here's a picture of me with Robin.
Bart: Who the hell is Robin?

Mayor Quimby: Mr. Plow, for making it possible for people to get where they're going without resorting to public transportation or car-pooling, I give you the key to the city. 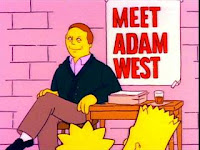 Teebore's Take
Really, what's there to say about "Mr. Plow"? This is probably one of the most well known and beloved episodes, simply for the fact that it's ridiculous funny. From Angela Landsbury walking across hot coals ("Excitement, she wrote!") to a hilariously-unsettling Adam West (previewing his later Family Guy role) to Homer's schlocky commercial ("You are fully licensed and bonded by the city, aren't you Mr. Plow"/"Shut up boy!") to Homer preventing his plow from tumbling off a mountain by sliding the radio dial away from the edge (a gag written by Conan O'Brien), this episode is jam packed with laugh-out-loud gags. There's nothing terribly deep here, no significant character development; it's just The Simpsons doing their thing, and doing it extremely well.

This is one of those episodes pretty much everyone thinks of when they think "classic Simpsons episode". Heck, Family Guy has even mocked it's classic-ness. 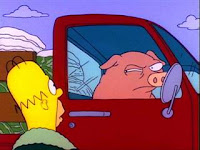