If you've been paying attention to these posts you've seen that at the end of a post I preview the upcoming shows for the next post. However, the last post's preview will now be wrong because I decided to call an audible.
I didn't want to make changes to the list after I initially started but I kept looking at what was coming up and I knew I had change it. It was bothering me too much. However, I probably could have gotten away without mentioning it because my last rankings post was two months ago. Two months! I surprised even myself when I discovered that. No more delays, let's get to the rankings (as always, the rules to my list are here):

25. Deadly Games: Dr. Gus Lloyd is a video game designer who creates a virtual reality game where he's the hero saving a heroine modeled after the ex-wife he still loves from various baddies modeled after people he doesn't like in his real life. Shockingly, after a laboratory mishap the video game characters come to life and go after his real life ex-wife. So it's up to Gus to save his ex-wife from various video game villains of his creation.
Let's face it, this show was made for me...especially 14 year old me. Unfortunately this show came out when special effects on TV shows, especially a UPN show on a tight budget, were lacking. But I still appreciated this show. How can you not like the camp value of villains like "The Boss" (modeled after Gus's first boss) who is vulnerable to red ink or "The Orthodontist" whose weakness is sugar? I was sad to see this show only last 13 episodes but, surprisingly enough, it actually had a bit of resolution!

24. Martian Successor Nadesico: A sci-fi series about a war between a Mars Colony and alien lizards from Jupiter. It starts off as a comedy. The main character, Akito, is a pacifist who ends up joining the crew of the Nadesico and can, reluctantly, pilot a giant mech against the alien lizards. Oh, and of course all the (attractive) women on the ship want to get into his pants but he's not interested in most of them. It's fairly cliched but's its supposed to be. It's a tongue-in-cheek satire.
Of course, this is anime, so by the end the show pretty much plays it straight. It has been a while since I've seen it but I think this series involves parallel universes and giant misunderstandings. I remember it being a fun series. 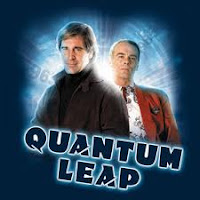 23. Quantum Leap: C'mon...everyone knows Quantum Leap. Scott Bakula leaps through time into different people's bodies righting wrongs. Frankly, the more you think about the premise and rules that inhabit this world the less it makes sense. So I tend not to think about it. I just take it episode by episode and it can be pretty fun.
Quantum Leap has for me what I call "Law and Order Syndrome." If I watch the first five minutes of an episode I'm hooked and have to watch the entire thing. Sometimes it's worth it, sometimes it's not. But it almost always has some sort of entertainment value...if only for Al's wise cracks and constant abuse of Ziggy.
One of my pet peeves is when this show is syndicated and shown back to back. At the end of an episode Sam would leap to another time and body and you'd get a preview of the next episode (famously ending with Sam uttering the words "Oh boy"). Anyway, a lot of the times in syndication the next episode wouldn't be the one previewed. LAME! Why does syndication have such difficulty with showing episodes in order? 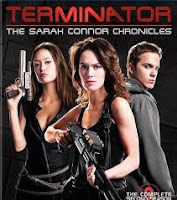 22. Terminator: The Sarah Connor Chronicles: I'm convinced the cast of this series hated each other. I'm just throwing that out there. This was a series about robot killers from the future. It had the bleak hopelessness the movies portray which can be interesting but also can get exhausting. Sometimes you want characters in a series to be happy even if just for a short time.
But back to the cast hating each other. So many times the main characters were split up and would go nearly entire episodes without interacting. It was weird. Even when the cast was together they lacked chemistry.
Along with me thinking the actors hated each other came the impression that the characters hated each other. This wasn't helped by the fact that they kept the stupidest secrets from each other even though their lives would be so much easier if they were just open and honest. Oh, and then there's the times when Sarah Connor would come up with strange theories and the other characters would look at her like she's crazy despite one being a killer robot from the future, another sent back from the future by his nephew to protect his nephew from killer robots from the future and the other slated to be the word's post-apocalyptic savior. But sure, the idea that a company with a three dotted logo is evil is way too far fetched.
Aside from all that, the acting was pretty good, the plots were mostly interesting and I enjoy the premise. So I did like the series. I just think it could have been more.

21. Ronin Warriors: If you're unaware of who the Ronin Warriors are, just know that their power's in the armor. There's an ancient evil in the Netherworld trying to break free and five (teenaged?) boys don magical armor, each with its own special properties, to combat this evil.
This series holds a special place in my heart since it's the first anime I remember watching. It was way back in middle school (maybe earlier) and I loved the action. I was also impressed by a cartoon having a progressive storyline instead of returning to the status quo at the end of every episode.
*spoiler alert* After the Ancient One sacrificed himself he reappeared (sort of). As a kid I remember thinking how cool it would be if this new Ancient One was actually the ex-villain Anubis taking on the Ancient One's role. Lo and behold, that's exactly what happened! I was so excited because A) It made for a cool story and B) It made me feel really smart.
Unfortunately, as this series was coming to an end (it was on some local network at like 2:30PM during the summer) I had to go on vacation with my family. I didn't realize the series was ending so a week later when I got home Ronin Warriors was no longer on the air. I had missed the ending and the network wasn't replaying the series! Instead they were now airing Exosquad. (Which, incidentally, wasn't a bad trade off...but I didn't know it at the time.) Anyway, long story short, I had to wait years later until Cartoon Network aired the series to finally see how it ended. It was worth the wait.
Up next time: A couple comic book characters, a classic and, of course, more anime.
Newer Post Older Post Home
Posted by Dr. Bitz at 1:46 AM