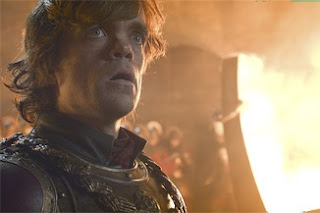 After several feints, cutaways and allusions, Game of Thrones gives us our first out-and-out battle, and suitably, it also gives us the first episode set entirely at one location. It was well worth the wait, giving us an intense, focused depiction of Stannis' attempted invasion of King's Landing. While the show's budget can't allow for it do too many episodes like this (even on an HBO budget) they at least they made the most of the opportunity.

What the show can afford to do more often is limit an episode's focus to one character or location. While I wouldn't necessarily advocate a change to the show's methodology, I wouldn't mind seeing more episodes with a similar narrow focus as "Blackwater", even if it didn't involve a massive battle. They'd have to be careful: the focus in this episode worked in part because several of our main characters were in or around King's Landing. As much as I like the characters involved, an episode set entirely north of the Wall or in Qarth would come dangerously close to being boring, but an episode focused solely on Theon's bumbling conquest of Winterfell or the Lannister's hunt for the Brotherhood or the adventures of Arya would make a good occasional break from the show's otherwise sprawling structure.

Other Thoughts
I mentioned this before, but my enjoyment of Tyrion and hatred of Joffrey and Cersei had me very conflicted about the outcome of the battle. That said, while I was glad Tyrion survived, by the end of the episode, I was pretty much enraged that Tywin showed up to save the day, especially since it looks like he's going to steal all the glory from Tyrion anyway, which is pretty much the worst possible outcome for me: Tyrion and Stannis both lose, and Joffrey wins.

I hope we find out Robb is able to take advantage of Tywin's absence from the north.

Loved how subtlety they alluded to the Hound's fear of fire, and his kiss off to Joffrey was the highlight of the episode. Even though I suspect Sansa is (stupidly) staying in King's Landing, I hope we see more of him.

Second only to the Hound running out on Joffrey was Tyrion's inspirational speech, which managed to hit all the expected notes of a "lead your men into battle against terrible odds" speech while still remaining true to the character. That's his Emmy submission, right there.

Cersei has recently become a character I love to hate, and her increasingly-drunken rants throughout this episode were hilarious.

I suspected that Cersei would discover Shae's identity in the course of this season, but that's apparently a bit suspense the show will continue to dangle into at least the next season.

Tyrion: Those are brave men knocking at our door. Let’s kill them!


Once Upon a Time: An Apple as Red as Blood 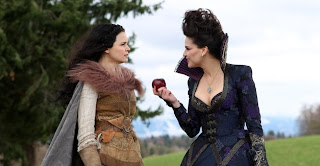 Not surprisingly, given its placement as the season's penultimate episode and thus its requirement to finally address the show's overarching plot, this was one of the more focused and driven episodes of the season. Regina decides once and for all to get rid of Emma, and in doing so, triggers a chain of events that will (presumably)(hopefully) force Emma to accept the truth about Storybrooke.

Unfortunately, the in-story rationale for this long overdue plot movement is rather thin, as the final straw for Regina is a dream she has in which the residents of Storybrooke, led by Emma, turn on her. While that's suitable justification for her actions, there's no reason Regina couldn't have had that dream at some point earlier in the season. Even though the episode opens with Emma about to drive out of Storybrooke with Henry, Regina remains largely ignorant of that fact, and the irony in her "ready for the finale" actions is that Emma was prepared to leave all on her own before Henry proved he was right to Emma once and for all. In the end, the only reason Regina really makes a big move against Emma is because this is the second to last episode of the season.

That said, I'm not going to complain too much, because this show desperately needs Emma to wake up and get on the same page as the audience. If it takes a little bit of conveniently-timed dreaming to make that happen, so be it.

Other Thoughts
In the fairyback, we get a (mostly greenscreened) action sequence that sets up the Evil Queen's big move: getting Snow White to eat the poisoned apple in order to save Charming. At this point, all we need to see in the finale is Charming's escape and we'll be right up to where their story began in the pilot.

The effects work in the FTL battle scenes was back to their choppier form from earlier in the season, but I did really enjoy Snow White swordfighting.

I also liked that Regina managed to get a hold of not only a poison apple, but the specific one Snow White bit into. 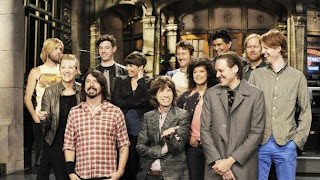 Mick Jagger actually acquitted himself much better than I expected. I know he's been on the show before, but I can't recall if he's ever hosted (if so, I haven't seen it) but I was impressed by both the amount of material he was given (I'm pretty sure he had more airtime than Will Ferrell did last week) and how well he handled it. Yes, he was clearly struggling to suppress his accent in some sketches, but props for trying. And for someone who isn't an actor, he did a fine job of not looking like he was reading off cue cards the whole time.

The episode itself I found more amusing than funny; not bad, but with fewer laugh-out-loud moments or transcendent sketches. But even the sketches that didn't quite work for me were still pleasant enough, and perhaps I was just saddened by the imminent departure of two of my favorite actors on the show.

Cold Open: If you've read these posts for very long, you know I'm not a huge fan of the Lawrence Welk open, but for whatever reason (part Jon Hamm, part knowing this was probably the last time we'll see it, at least regularly, or at least with Kristen Wiig's involvement) I enjoyed this one more than most past instances. I mean, it wasn't my favorite sketch or anything, but I didn't zone out and/or fight the urge to fast forward through it like I usually do. And it's better than a Gilly sketch...

Karaoke Night: Jagger's showcase sketch (though I liked his appearance in a later sketch more), this bit more or less represented the entire show: I was amused by the central joke, but I didn't necessarily laugh at it, and I wasn't entirely sure I was supposed to. A bit long, but again, amusing enough.

Digital Short: Last week's 100th Digital Short seemed perfectly written and positioned to be the show's last (at least in this form)...until they decided to go out on a 101st sketch, "Lazy Sunday 2" which makes even more sense. This didn't work quite as well as the first, for a few reasons (mainly the fact that Sister Act II isn't as funny as The Chronic(what?)-cles of Narnia), but was still lots of fun and the perfect sketch with which to end this particular era.

Weekend Update: A bit shorter than usual, and with only one guest, but it was Stefon, so who's complaining? My favorite of his various terms this time? Draggers: when an old dog has short legs but a long penis.

Politics Nation: One of the night's weaker sketches, though again, some of the bits were amusing enough.

The Californians: Still about a third too long, but enjoyable enough (it always gets me when they start talking about the highways they used to get somewhere). That said, I hope it's quick return doesn't mean this is a sketch we'll see again too soon; trotting it out every once in awhile can work, but there's not enough to the joke to survive an onslaught of appearances.

So You Think You Can Dance At An Outdoor Music Festival: Being a huge Aerosmith fan, this was my favorite Jagger appearance of the night, as he pretty much nailed Steven Tyler. I also loved the various digs at Dave Mathews and the various dancers themselves.

Kristen Wiig Goodbye: I get the desire for the show to say goodbye to Kristen Wiig. Lord knows I'm not her biggest fan, but I can't deny she's a talented comedian and that she brought a lot to the show. My biggest issues with her have always been the show's over-reliance on her, to the point that it overlooks the other talented actresses in the cast (which isn't entirely Wiig's fault) and the fact that her most annoying recurring characters are the ones everyone seems to have latched onto and thus, show up the most.

But her run on the show has more or less defined the post-Tina Fey/Amy Poehler era, and it makes sense to give her a sendoff. It just seemed odd that it started as a sketch before morphing into a straight-up goodbye segment. When it first started, I figured they were going to go for a slightly-fourth wall breaking sketch, saying goodbye to a character Wiig was playing as a way of saying goodbye to the actress. But then they pretty much just said goodbye to the actress, and as sweet as it was (she seemed to lose it the most when Bill Hader came up), I think it would have worked better as either a sketch or a straight-up goodbye, instead of both.

That said, I felt bad for Andy Samberg and especially Jason Sudeikis (at least Samberg used the last two digital shorts to mark his departure from the show), both of whom are also leaving the show but didn't get a wheepy, full-cast goodbye. I will miss the Digital Shorts, Laser Cats, Lonely Island and Samberg's Nicholas Cage. I will miss Pete Stinkel, the tracksuited dancer in "What's Up with That?" and Sudeikis' Biden and the Devil, all far more than I will miss Kristen Wiig.

Nevertheless, next season should be an interesting one...

Favorite Sketch: I'll go with So You Think You Can Dance At An Outdoor Music Festival, with Stefon and the Digital Short close seconds.

Steven Tyler: It needs more scarves! I’d give you mine but it keeps my head from falling off.

Episodes Featuring a Game Show: 7/22
Seems a little lower for the season than I expected, but next year I might have to track the number of episodes with a talk show - I bet that number is huge!

Episodes with a Monologue Featuring a Song: 7/22
Last season I said it felt like one out of every three monologues featured a song, and while I think this season front loaded a lot of those, the numbers bear out, with roughly a third of all episodes featuring a song in the monologue.

Email ThisBlogThis!Share to TwitterShare to FacebookShare to Pinterest
Labels: 2011-2012 TV Season, Game of Thrones, Last Week in TV, Once Upon a Time, SNL, TV, TV reviews