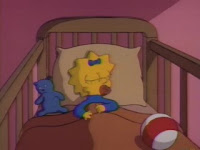 Or the One Where
We learn the story of Lisa's birth/first word. And Maggie says her first (and thus far only) word.

The Setup
While trying to get Maggie to talk, Marge tells the kids the story of Lisa's first word (Bart's was "aye carumba", said after walking in on Homer and Marge having sex; Marge declines to tell that tale).

Notable Notes
This is the third "flashback" episode, following "The Way We Was" and "I Married Marge", picking up where the last one left off and detailing the birth of Lisa and her first word, as well the Simpsons moving into their house and meeting the Flanders for the first time.

In what I remember being a big, much publicized deal at the time, even though she only speaks one word, Elizabeth Taylor does the voice of Maggie. The actress will return for a slightly larger appearance in the season finale. It's been said that Taylor, fed up with the repeated takes requested by the Simpsons staff because her reading was too sexy, told Matt Groening to fuck off and stormed out of the studio. Though Groening admitted as much in later interviews, he later denied it, and it's been suggested that while Taylor did tell Groening to eff off, it was done in fun, and she didn't storm out afterwards, a scenario which seems likely given her appearance in a later episode.

The (hilariously disastrous) promotion Krusty runs in which customers receive a scratch-and-win card that will award them prizes based on the results of various Olympic events is loosely based on a similar promotion McDonalds ran, with similar results caused by the subsequent Soviet boycott. 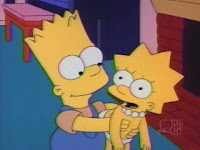 Favorite Quotes
Lisa: Remember, it is better to remain silent and be thought a fool than open your mouth and remove all doubt.
Homer's brain: What does that mean? Better say something or they'll think you're stupid.
Homer: Takes one to know one.
Homer's brain: Swish!

Marge: There's going to be twice as much love in this house as there is now!
Homer: We're going to start doing it in the morning?

Marge: Once we get the cats out of the way, it won't be too bad.
Agent: Actually, according to the will, the cats own the house. You'd be their tenants!
Lisa: I wish we lived in the kitty house.
Bart: I could've trained them to be my unholy army of the night. Go, my pretties! Kill! Kill!

Krusty: How much are these free burgers gonna cost me?
Accountant: Not to worry, Mr. K. We've rigged the cards: they're all in events that Communists never lose.
Krusty: I like, I like.
Woman: This just came over the wires, Big K.
Krusty: Uh-huh. Soviet boycott. U.S. unopposed in most events. How does this affect our giveaway?
Accountant: Let's see...You personally stand to lose $44 million. 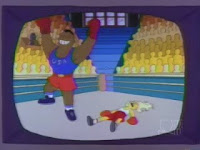 Teebore's Take
Another out-and-out classic, and arguably the best of the flashback episodes, though I have a soft spot for the slightly-zanier "Maggie Makes Three", as well as the conceptually-strong "That '90s Show". Regardless, this one has always been a personal favorite of mine, in part because of the 80s setting, in part because, as a fellow first child, I've always shared young Bart's anxiety over the arrival of his sibling, and in part because Krusty's nosedive thanks to the Soviet-boycotted Olympics is absolutely hilarious (and is pretty much the thing I think of now when I think "Olympics"). Though ostensibly about Lisa's first word, this episode is really more about Bart, and finding his place in the family after Lisa is born, and it does a nice job of showcasing Bart's mischievous side while still making him sympathetic. Aside from all the laughs, the ending, in which Bart is won over by Lisa's devotion of him, followed by Homer (unknowingly) finally being called "Daddy" by one of his kids, is genuinely sweet. If you wanted to pick an episode to showcase The Simpsons ability to meld humor and heartwarming moments, you could do a lot worse than this episode.

Even putting aside the sheer quality, this is an episode noteworthy as well for all the backstory it reveals, and for featuring Maggie's only spoken word. 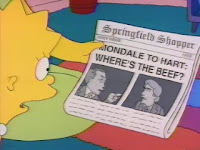