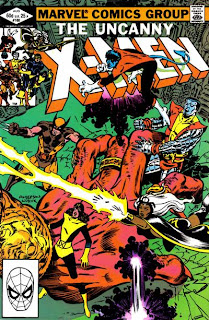 In a Nutshell
Colossus' sister Illyana is kidnapped by Belasco.

Plot
The X-Men are training on their island base while being unknowingly watched via a scrying device by a sinister figure. The figure calls out to Illyana, and when she wanders off, Kitty follows her. Illyana disappears inside a dark temple, and when Kitty enters, she vanishes as a circular patch of light appears beneath her. One by one the rest of the X-Men similarly vanish. Kitty awakens inside a sinister, grotesque room and is confronted by a warped, degenerate version of Nightcrawler and the ruler of the realm, Belasco. He imprisons Kitty inside a large crystal and calls forth his servant S'ym, ordering the demon to deal with the rest of the X-Men. As S'ym departs and the X-Men arrive in Limbo, Belasco gives Illyana an amulet containing a Bloodstone, telling her he intends to make her his apprentice and craft more of the Bloodstones. 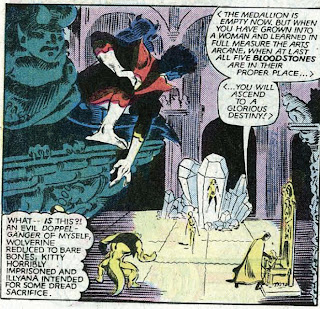 Meanwhile, the X-Men come together, aided by a mysterious hooded figure, and defeat S'ym before confronting Belasco. The sorcerer flees, and Storm orders the X-Men to follow, but the hooded figure intervenes, revealing herself as an older version of Storm. She explains that time works differently in Limbo, and in her past, she too ordered her X-Men to pursue Belasco, and it led to them all being killed or damned. Belasco returns, and the older Storm holds him off while the X-Men use her magic to teleport home. However, Belasco is able to grab Illyana just as the X-Men depart. Kitty reaches back into the portal and gets ahold of Illyana, pulling her free of Limbo. However, Illyana is now a teenaged girl, seven years having passed for her in the instant it took Kitty to reach her. Though upset, Colossus does his best to comfort his sister, unaware that she still possess Belasco's medallion, and that it is filled with more Bloodstones.

Firsts and Other Notables
Illyana Rasputin doubles in age this issue, going from seven to fourteen as a result of spending several years in Limbo (while only a moment passed for the X-Men on Earth). Though it will be a little while before she receives the codename (or even that her mutant power is established), this is essentially the first appearance of Illyana as Magik. Her time spent in Limbo will be the subject of the Magik limited series. 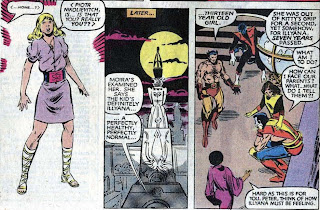 Belasco makes his first appearance in X-Men, following his debut in Ka-Zar's solo series. A sorcerer from the 13the century who struck a deal to help the evil Elder Gods return to Earth in exchange for vast power, Belasco rules a realm known as Limbo and resembles the Christian Devil. He kidnaps young Illyana in this issue in order to train her as his apprentice.

Belasco's Limbo, sometimes called Otherplace, appears for the first time. It is a different Limbo than the one ruled by Immortus, though time is similarly fluid in both places. This version of Limbo will play a significant role in the X-Men franchise in the years ahead.

This is also the first appearance of Magik's amulet, given to her by Belasco, and designed to carry the bloodstones created out of pieces of her soul. 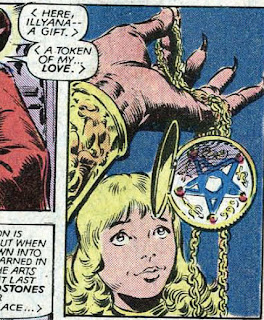 Belasco's assistant S'ym appears for the first time. Inspired by independent creator Dave Sim, S'ym will quickly surpass Belasco in terms of impact on the X-Men narrative, becoming a major player in the 1988 "Inferno" event. 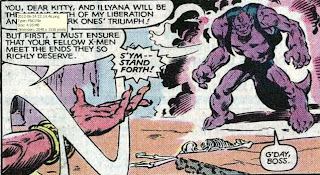 For the record, the reality in which the X-Men journeyed to Limbo and were stuck there, resulting in Sorceress Storm and Pervert Nightcrawler, has been deemed Earth-8280.

A Work in Progress
The issue opens with the X-Men training at their new headquarters, and Kitty notes it's been a long time since they were able to work out together.

A large "X" has been added to the forehead of Kitty's costume. 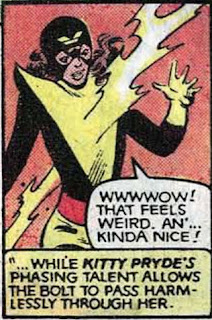 It is noted that it's only been a day since the events of the previous issue, and that the X-Men are still waiting for Cyclops to return to the island in response to Moira's call last issue.

We see the "stepping discs" used when characters teleport to and from Limbo for the first time. The terms is lifted by Kitty from Larry Niven, and remains the primary descriptor for the effect. 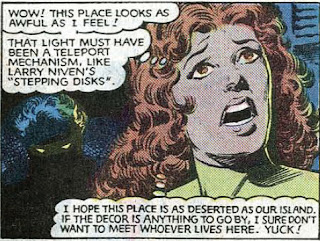 In case you were wondering, Wolverine's claws can cut Colossus' armored skin. 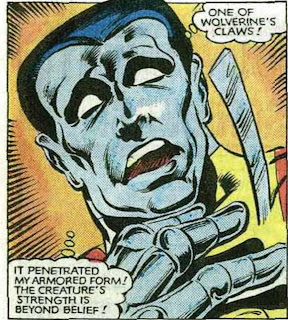 Also, it's noted that Cyclops has taught Colossus some fighting techniques. 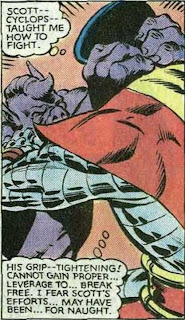 I Love the 80s
The issue opens with Belasco mystically monitoring the X-Men from afar and commenting to himself about their abilities, which serves as a perfect bit of "every issue is somebody's first" exposition for any new readers. 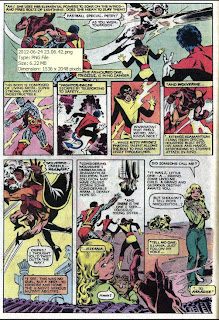 In Limbo, the demented alternate Nightcrawler wastes no time feeling up Kitty in a couple of panels I'm surprised made it past the Comics Code at the time. 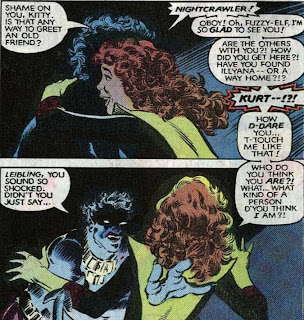 Storm awakens in a strange place, separated from her teammates, after having been attacked by a tentacle monster while manifesting all her teammates powers, and decides it's a good time to go for a swim. 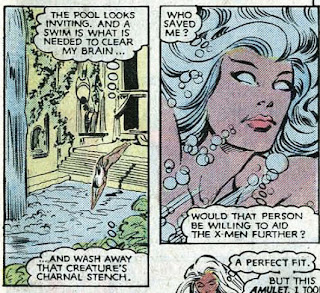 Artistic Achievements
Great use of sound effects when the two Nightcrawlers teleport at the same time. 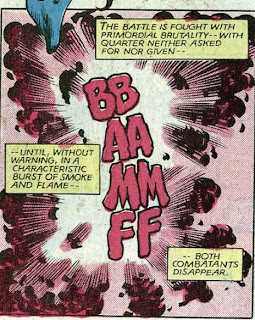 For Sale
There is a one page ad at the back of the issue for the upcoming X-Men/Teen Titans crossover, done in the style of the Apocalypse Now poster. 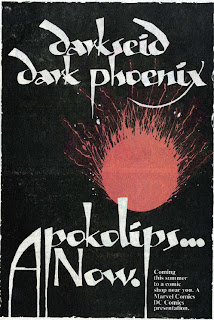 And the back cover features the first ad for the GI Joe fan club to appear in X-Men. 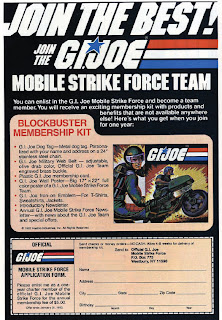 Bullpen Bulletins
It's mentioned that the new GI Joe comic is being advertised on TV, the first time a comic was advertised that way.

Teebore's Take
One of the things this four issue breather allows Claremont and Cockrum to do is play with the X-Men in different genres. After the space opera of the Brood story, issue #158 saw a return to traditional super-heroics, while #159 dealt with horror. This issue takes on fantasy (with next issue serving as a bit of swashbuckling adventure yarn). "Fantasy/Occult" X-Men stories are almost as divisive in their own way as "X-Men in space" stories, and while Claremont has dabbled a bit in the form previously (most significantly with the twice-appearing N'Garai demons), Illyana's transformation in this issue opens the door for a series of Claremont-penned stories in the next half decade featuring various demonic invasions which create a springboard for questions regarding the nature of humanity. The levels to which you appreciate/tolerate those future stories (as well as what's to come for Illyana) likely colors your enjoyment of this issue.

On its own merits, it is effectively creepy. Anderson's art isn't quite as macabre as it was during his fill-in on issue #144, but it does a fine job depicting Belasco's twisted realm (that said, it would have been interesting to see what Seinkiewicz's moody pencils could have done with this issue, or even how Cockrum's skills with the fantastic could have adapted to something darker than "Kitty's Fairy Tale"). Claremont, meanwhile, turns in one of his darkest scripts yet, with grotesque moments (such as Kitty's skeleton being pulled out of her), allusions to child molestation, and one overtly dirty moment I'm surprised made it into a Marvel comic in 1982. And so while this issue is essentially setup for future stories, it stands for now as a creepy oasis of the grotesque.