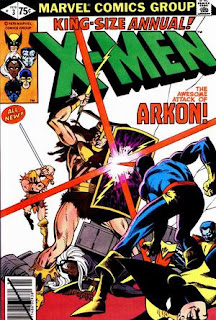 In a Nutshell
The X-Men battle Arkon the Magnificent.

Plot
Early one morning, Arkon the Magnificient, ruler of the extradimensional world of Polemachus, arrives in New York. He heads immediately to Avenger's Mansion and accosts Avengers' butler Jarvis, demanding he contact Thor. When Jarvis explains that Thor is away, Arkon despairs that his world is doomed. Just then he's contacted by his Grand Vizier, who tells him of another who may be able to help them. 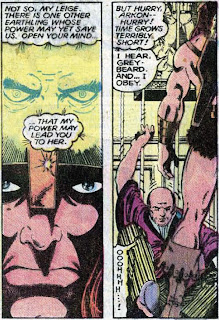 Meanwhile, the X-Men are training in the Danger Room. Caught in a trap, Storm panics and loses control, severely damaging the control room and forcing Cyclops to hit the manual override to shut down the room. Questioning her role as an X-Man, Storm goes off on her own, where she is attacked by Arkon. Their fight spills out of the mansion and is joined by the other X-Men. After Arkon hurls one of his thunderbolts at Storm and she disappears, an enraged Colossus overpowers him. Reasoning that the thunderbolt teleported Storm somewhere, Cyclops hurls one at the ground, transporting the X-Men and Arkon to Polemachus, at the center of Arkon's court. 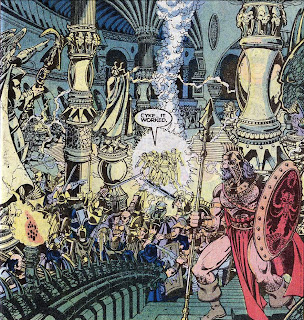 As Arkon's warriors attack the other X-Men, Nightcrawler slips away, following Arkon and the Grand Vizier. He is led to Storm, who has agreed to help Arkon. In order to alert the other X-Men to their location, Nightcrawler surprises Storm, who lashes out with lightening. Observing the outburst, Colossus commandeers a dragon and the X-Men fly to Nightcrawler and Storm. Reunited, Arkon explains that his world is powered by an energy ring which surrounds the planet. The energy recently died out, and Iron Man created a device which recharged it. But now the the ring has failed again, plunging the world into darkness. Storm, determined to use her power to do some real good, has agreed to recharge the device with her power, though the effort will likely kill her. Instead, Cyclops orders Nightcrawler and Wolverine to modify the device to absorb optic blasts instead of lightening. When the device is ready, Colossus grounds Storm, who builds up a massive charge of electricity then transfers it to Cyclops. The supercharged optic blast manages to recharge the energy ring, saving the planet and earning the X-Men Arkon's gratitude. After they decline his offer to fight by his side, Arkon sends the X-Men home.

Firsts and Other Notables
This is the first X-Men annual to contain an original story; both prior annuals were merely collections of reprinted stories.

The antagonist of this issue is Arkon, a Conan-like ruler from another planet who previously crossed paths with the Avengers. His schtick is basically that he shows up on Earth seeking help to fix his ailing planet, gets into a fight with a superhero or group of superheroes before everyone returns to his planet and ultimately helps fix whatever the problem is. This is his first encounter with the X-Men, having previously appeared in The Avengers and Fantastic Four. 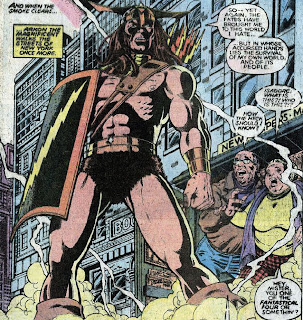 George Perez provides the pencils for this issue, the only issue of X-Men that Perez, a highly-regarded artist well known for his runs on Avengers, the new X-Men-inspired New Teen Titans and DC Comics first universe-altering event Crisis on Infinite Earths, has drawn to date.

A Work in Progress
A footnote in this issue helpfully tells us that it takes place between issues #124 and #125.

As such, Cyclops references his belief that Jean and Beast are dead (meaning we have yet another issue of the X-Men hanging out at the mansion and not calling Moira on Muir Island).

When Arkon arrives at Avengers Mansion seeking Thor, Jarvis tells him that Thor is off on his own mission. At the time, Thor was hanging out on the Squadron Supreme's alternate Earth, circa Thor #280.

The X-Men acquire a handful of Arkon's thunderbolts, used to travel between extradimensional worlds, in this issue. 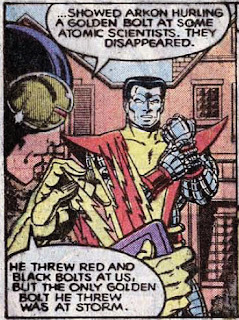 Wolverine and Nightcrawler are tasked with re-configuring the device Iron Man created to help sustain Polemachus' energy rings. Wolverine says he's a "tinkerer", the first indication we've seen of this, while Nightcrawler's time spent with Banshee repairing the Blackbird (seen in issue #122) is referenced. 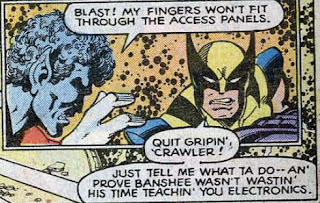 Nightcrawler notes that Arkon's bones are almost as unbreakable as Wolverine, another nod towards what will ultimately be revealed as Wolverine's skeleton being coated in adamantium. 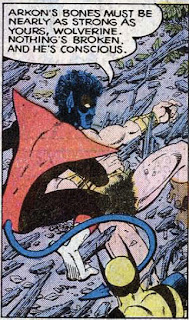 That 70s Comic
Arkon, in that grand Marvel tradition, attacks everyone he meets upon sight, despite being on Earth specifically seeking help from its super hero population. He admits that it's perhaps not the best approach, but it's how Imperions do things. 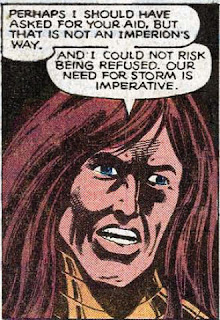 During a training session in the Danger Room, Storm freaks out and ends up destroying the control room, causing the Danger Room to go haywire and forcing the X-Men to try and reach the override switch to shut it all down (which is within the room itself). All of which seems wildly unsafe on multiple levels. 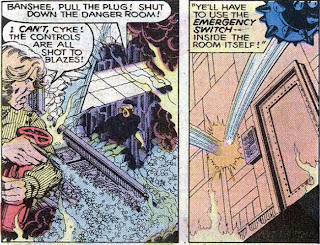 Cyclops mentions watching the Avengers battle Arkon on TV "newstape" (which also suggests, if Cyclops is routinely watching footage of the Avengers, he should have seen Beast, alive and well as a member of that team, by now...). 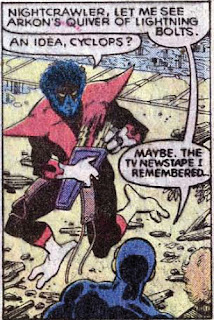 Claremontisms
More German from Nightcrawler, another "verdammt" and "unglaublich" (unbeliveable), while Colossus drops another "tovarisch".

Artistic Achievements
Penciller George Perez and inker Terry Austin are two of the most detail-orientated artists in comics, so pretty much every panel in this issue is packed full of linework, and the backgrounds are painstakingly filled in with little details (such as each book on a bookcase being rendered individually).

The Awesome and Terrible Power of Cyclops
For the first time since the Silver Age, the fact that Cyclop's optic blast can be diminished through use and requires recharging is referenced, mainly to setup a plot point for this story, in which Cyclops, running low on power on the sun-less Polemachus, gets recharged via Storm's electricity, a process that Claremont describes as akin to "a high-performance engine primed for high-octane premium gas suddenly forced to run on low-octane regular."

We also get a neat sequence that shows Cyclops transition from his visor to regular ruby quartz glasses.

For Sale
Check out all the Star Wars toys, including a pre-Empire Strikes Back Boba Fett. 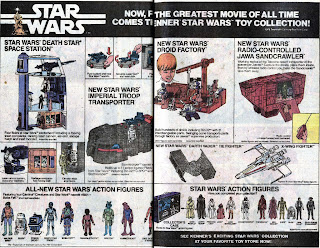 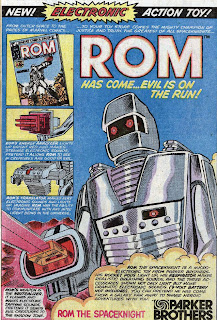 John Byrne on the Danger Room
"I hate the Danger Room. I see nothing wrong with training exercises, but the Danger Room can kill, and I never liked that. Right from the start I didn't like the idea that the failure to pass this particular test carried the ultimate demerit, which was that you die in there. I always wanted to do a story where Xavier got pushed in there by some villain or something and have him survive the danger and then realize how terrible it was and shut it down."

Future X-Men editor Bob Harras on his favorite X-Men scene.
"There are little moments that I remember, the little graceful notes throughout the years, that you go, 'Okay, that's nice.' For instance, there was a scene between Storm and Scott, I think it was during the Claremont/Byrne run, where Scott is changing out of his visor and into his glasses, and he has to keep his eyes shut really tight while he's doing that. Storm just says to him, 'Scott, is this the life you imagined when you were a kid?' He puts on the glasses, looks at her and says, 'Of course not.' I remember that was such a great little moment, because it explains that they do this because they have to - because it's what life has forced them to do - but they once had dreams of doing other, 'normal' things. I think that's so Marvel in a lot of ways, but it's really so X-Men, too. For some reason that scene, more so than...some other major event, sticks out to me as the kind of thing that makes those characters great."

Teebore's Take
X-Men annuals tend to be pretty hit-or-miss, and unless they're penciled by Art Adams, they're mostly "miss". This is one of the better annuals in the early goings, though it's far from being great. Like many annuals, the story is padded, with an extended Danger Room sequence and some overly-long fight scenes helping fill the pages. The story also suffers from centering on Storm's doubts about being an X-Man immediately after a similar long running subplot involving Colossus was recently put to rest (with Storm herself playing an integral role in assuaging Colossus' doubts). Claremont does attempt to differentiate between the two (Storm is less concerned with being an X-Man and more concerned that being an X-Man is limiting her ability to do more good for the world), but the whole scenario still feels repetitious and somewhat forced.

Still, there's plenty to enjoy here. The limitations of the story are helped along by the strong characterization we've come to expect from Claremont by now and the art from George Perez is both a worthy compliment to Byrne's regular work and gorgeous in its own right. If annuals are meant to showcase bigger-than-normal stories, you could do a lot worse than George Perez drawing extradimensional barbarian hordes fighting the X-Men.

Next Issue: X-Men #125
Some long running plot threads start to come together as Claremont and Byrne kick off their next big epic.
Newer Post Older Post Home
Posted by Austin Gorton at 8:00 AM