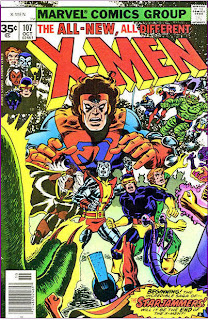 Plot
The X-Men emerge from the stargate onto an alien planet dominated by a large crystal, and are faced with the Shi'ar Imperial Guard. When the Guard refuses to release Lilandra, the X-Men attack, despite being heavily outnumbered. On the crystal's dais, Emperor D'Ken summons the Soul Drinker to destroy Lilandra but she is saved by Nightcrawler. As the battle continues, Lilandra explains to Cyclops and Phoenix that once the nine death stars over the planet align and imbue the M'Kraan Crystal with energy, D'Ken intends to use that power to make himself all powerful, but she fears that power will destroy the universe. 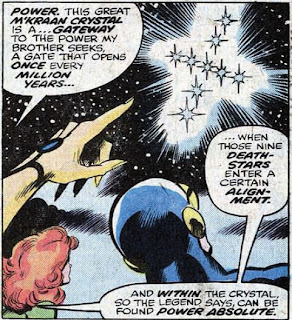 The X-Men, who at first took the Imperial Guard by surprise due to the sheer ferocity of their attack, are soon worn down by the Guard's superior numbers and overwhelmed just as the Starjammers arrive and help turn the tide. Soon, the Guard is defeated, but D'Ken doesn't care: the death stars align, and the M'Kraan crystal is flooded with energy. The crystal magnifies that energy, and as it builds, all of reality blinks out of existence for a moment. Aboard the Starcore space station, Dr. Corbeau confers with Reed Richards on Earth and the pair agree that they have no idea what caused reality to blink but they know that if the blinks continue, the universe will die.

Firsts and Other Notables
The Shi'ar Imperial Guard make their first appearance and serve as the villains of the piece, though they are merely following the orders of their emperor. Prior to his run on X-Men, Dave Cockrum made a name for himself as the artist on DC's Legion of Superheroes, and each member of the Imperial Guard is modeled after a specific Legionnaire (Gladiator is Superboy, Mentor is Brainiac 5, Hobgoblin is Chameleon, etc.). 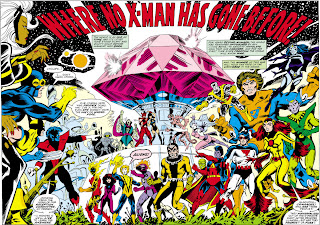 After cameos by members Corsair and Cho'd in issue #104, the Starjammers make their first full appearance in this issue, and in addition to the characters we've already seen, include the cyborg Raza (who speaks in Shakespearean lingo) and the feline Hepzibah (who is named for a character from the "Pogo" comic strip). 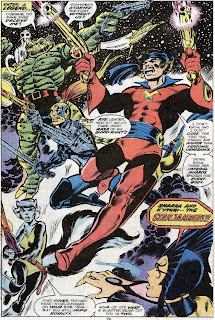 The Shi'ar Emperor D'Ken, Lilandra's older brother, appears in full for the first time, as does the demonic Soul Drinker (which was adapted into an episode of the X-Men animated series) and the M'Kraan Crystal, a powerful and cosmic device that will feature in a few X-Men stories through the years.

This the final issue of Dave Cockrum's first run as the book's penciller. With the book on the verge of going monthly and having just accepted a staff position at Marvel to design covers, characters and work on merchandising art, he bowed out, feeling he would be unable to meet a monthly schedule.

A Work in Progress
Lilandra lays out the details of her backstory and D'Ken's plan: after declaring his intention to harness the power of the M'Kraan Crystal, Lilandra, fearing this would lead to the destruction of the universe, opposes him and is declared a traitor. En route to being executed for treason, Lilandra escapes and after her mind links to Professor X's thanks to the telepathic beam of human consciousness he used to repel the Z'Nox, heads towards Earth. D'Ken's telepathic agents also detect Xavier's thought beam, and deduce that Lilandra is headed there. D'Ken contacts the Shi'ar agent on Earth, Davan Shakari aka Eric the Red, and orders him to prevent Lilandra from contacting Xavier. Using Havok, Polaris and assorted X-Men villains, Eric attempts to kill the X-Men in order to clear a path to Xavier, but fails, until Firelord gives him the opportunity to capture Lilandra and bring her to D'Ken on the world of the M'Kraan Crystal, where D'Ken is waiting for the death stars to align and imbue the crystal with power.

Though in issue #105 he claimed that Lilandra exiled him to Earth, here Eric the Red is referred to as the Shi'ar's agent on Earth, suggesting it is a post he was assigned. As we've discussed in the comments of some past entries, it's possible that Lilandra, Grand Admiral of the fleet before her arrest, simply assigned him the post, but he viewed it as an exile. Lilandra says that the Shi'ar have known of Earth for years and "have placed observers there since it became a crossroads planet for half the star races in the Milky Way," a clever in-story nod to all the stories involving aliens like the Kree and Skrulls sprinkled throughout the Marvel Universe. Also, Eric the Red is depicted as having human-like hair, as opposed to the triangular feather-like hair of the Shi'ar. 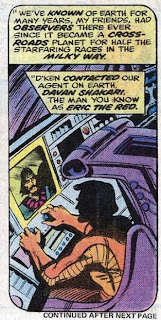 A point is made that the Shi'ar have evolved from avian ancestors as opposed to mammalian ones.

The backup story in the Classic X-Men reprint of this issue fleshes out Lilandra's escape and her first contact with Xavier, offering more details about their first mental contact.

We see Storm take charge for the first time, and she notes that's its only been a day since Magneto attacked the X-Men in issue #104 (see also helpfully tells us Banshee's full real name, in we're the Imperial Guard or this is our first issue of the comic...).

Cyclops and Wolverine continue to bicker. 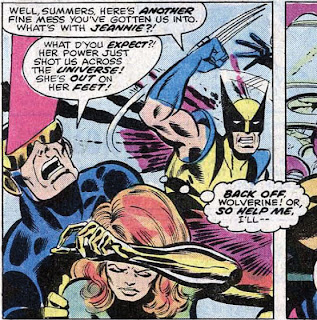 Nightcrawler teleports with another person for the first time, and the strain of doing so is great.

Wolverine's costume is destroyed during the battle, and he (off-panel) forcibly removes the costume of Imperial Guardsmen Fang to replace it. He will continue to wear that costume until issue #109. 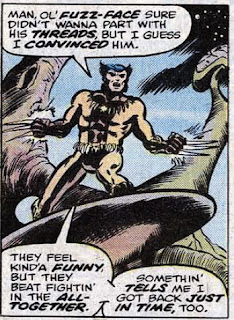 Lilandra refers to the Z'Nox as a "minor, freebooting race", a quick way to establish the power of the Shi'ar by having them comment on the last, and to this point, most fearsome, alien race the X-Men encountered.

Struck by his use of American slang and his accent, Phoenix reads Corsair's mind, only to discover something so shocking...it will have to wait until next issue to reveal! 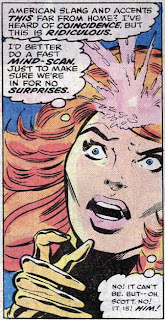 That 70s Comic
Though this issue was published only a few months after the movie was released, this story bears some resemblance to Star Wars, with a princess (Lilandra) looking for help from an old wizard (Professor X) and getting rescued by that wizard's trainee (the X-Men) and a space pirate (the Starjammers), while both stories feature the evil power of Death Stars. Though these similarities are likely highly coincidental, in added pages of the Classic X-Men reprint, Claremont has Nightcrawler acknowledge the them by saying, "Eat your heart out, George Lucas: this is a real Star Wars".

Claremontisms
Claremont turns in some wonderfully baroque, comic book-y narration in this issue, including, "the world is as old as time and its cities have stood silent and empty since before mankind was born," and "it begins. And, in moments, a once-tranquil plain ... is turned into a scene out of hell."

Claremont explicitly links this story to the final Thomas/Adams issue, the previous run on the title he most admired (or, by some accounts, the only previous run he'd read at this point), by having the Z'Nox-defeating "thought beam" from that issue serve as the device which first joins Lilandra's and Xavier's minds. 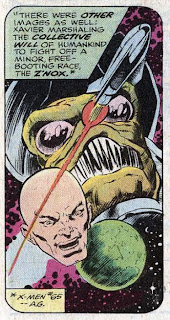 Artistic Achievements
Cockrum goes out on a high note, turning in his best issue yet, and it's one that features several dozen characters, all of which are uniquely rendered while the action remains easy to follow.

The opening splash page is particularly dynamic, and will go on to appear in many places as a visual shorthand for "Dave Cockrum's X-Men." 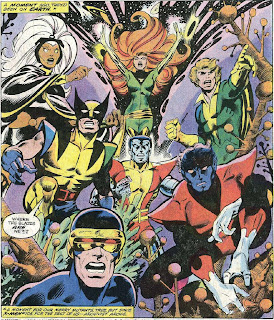 Young Love
Lilandra describes the first connection between herself and Xavier as feeling like she'd found a missing piece of her soul, echoing Xavier's sentiments from last issue. 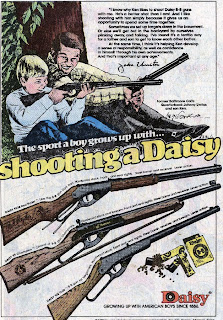 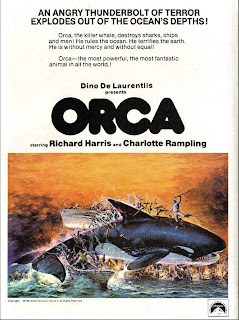 Dave Cockrum on leaving X-Men
"At the time, I was also going on staff at Marvel and I discovered that it's kind of difficult to take the train into New York, work eight hours, take the train home again and then sit down and draw a comic book. So I gave up drawing for a while."

Dave Cockrum on the Starjammers
"I had originally come up with the Starjammers as a concept for an individual series, and I approached Roy Thomas with the idea, suggesting I could either do it in Marvel Premiere or Marvel Preview. He said both books had enough inventory for two years and in the end I got so frustrated about not being able to do Starjammers anywhere that I proposed it to Chris, the idea being that we would work it into X-Men somehow. That's how Corsair became Cyclops' father and all that other stuff. Starjammers was originally going to be a stand-alone space pirate series - swashbucklers in space - and I wound up donating it to X-Men."

Teebore's Take
The threads of the Shi'ar story come together and we finally learn what the events of the last several issues have been building to as the first example of what have become known as "X-Men in Space" stories begins. These kinds of stories have long been a divisive subject amongst fans of the X-Men, with many people feeling that dropping the X-Men into full blown space operas on alien worlds moves them too far away from their core themes, of being a metaphor for discrimination, of "protecting a world that fears and hates them".

With this story (and subsequent "X-Men in Space" stories) Claremont suggests an answer: more than Superheroes, the X-Men are Science Fiction characters. This includes superheroes (as superheroes are wedded to numerous sci-fi trappings) but it also includes other things: aliens and starships and space pirates and stakes on a cosmic, not just a planetary, scale. It is a logical conclusion: Science Fiction is based in metaphor, with outlandish, futuristic and/or alien elements serving as a reflection on contemporary society, and the X-Men have from the earliest issues been more overtly metaphorical than many of their superhero peers, standing in for discriminated peoples everywhere. By no means is Claremont offering this as the definitive take on the X-Men (he himself will also try "X-Men as Fantasy characters", and as characters that are almost aggresively anti-Superhero), but rather is simply trying to show that the X-Men can easily operate in a genre beyond that of the traditional superhero.

Of course, this story is, literary theory aside, more obviously born of Claremont's desire to tell bigger and bigger stories married to Dave Cockrum's knack for drawing fantastic alien landscapes and futuristic technology (honed during his years drawing DC's Legion of Super-Heroes). Put aside the sci-fi trappings and we're left with a story that fits in squarely with the core idea of the X-Men, just one with bigger stakes than ever before. The X-Men are sworn to protect a world that fears and hates them; here, protecting that world just means doing it on a planet far away from their home, from a foe that threatens not just Earth, but the entire universe.
Newer Post Older Post Home
Posted by Austin Gorton at 8:00 AM