A full night of Fox animation, so let's take those quickly then move on to other stuff. 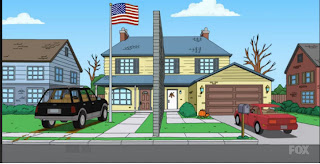 The whole "draw a line down the middle of the house" routine is a pretty standard sitcom cliche, but the show raised the bit to American Dad's usual surreal level by turning the line into a massive concrete wall. The montage of the family celebrating holidays on either side of the line was especially funny (moreso after the dialogue about how they did it all in one week). Like most such plots these days, the Steve B plot was pretty standard, though I do like how the principal's character has been expanded this season into being this unabashed asshole.

Francine: If he's gonna ram a traditional kitchen down my throat, I'll dump out a bay window on his chest! 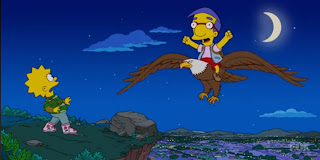 The A story was a pretty standard "Homer becomes a ___!" plot, while the B story was a little more interesting, especially in the fact that Lisa never did find out why Taffy liked Milhouse and that, in the end, Lisa didn't exactly shoot down Milhouse for a change. Though thankfully Kristen Schaal is given plenty to do on Bob's Burgers, as she was completely wasted as Taffy.

Not quite as strong as the last couple episodes, but I'm glad the show is back with a few more new episodes before the season ends. Also good to see the show develop its supporting cast a bit, as we got to spend some time at Mort's, which led to some great material for the kids (per usual) as well as Jimmy Pesto's hilarious Jamaican night. Also, Bob building a model of the bus from Speed, and his conversations with the little Keanu figurine, were awesome.

Tina: Gene, how are you feeling?
Gene: Kinda nauseous. A little light headed. Pretty good. Glad I ate it!
Louise: You say that about everything.
Gene: Yeah!

Louise: It's trying to sweet-talk us.
Tina: That's classic zombie.

Tina: Just pull all the levers. A lot!
Gene: But they look like robot wieners!
Louise: I know!
Gene: Okay! 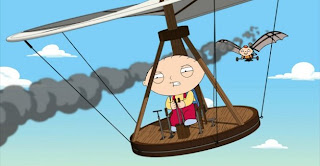 A solid Brian and Stewie outing (after the weirdness that was the one where they were trapped in the bank vault) with some fun time travel hijinks (which I'm a sucker for). I love the conceit of Stewie creating the universe, though I did wonder why, when he was going back in time at the beginning to mess with Brian, he didn't encounter his past selves. Then again, the episode did feature an aerial dogfight between Da Vinci flying machines, so perhaps there are bigger nits to pick...

Brian: So wait, that means, I kinda created the universe too
Stewie: Ha, no, you're sort of the Art Garfunkel of the universe.

Brian: So that means you're Italian.
Stewie: Of course. My love for Spaghetti-O's and smoking on the toilet. It all make sense.


How I Met Your Mother: The Perfect Cocktail 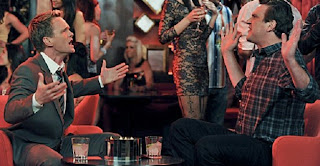 Secondly, can we all just agree that this whole Zoey storyline isn't working, and call it a wash? She's been around for almost a full season now, and while she has occasionally worked in a vacuum (the episode where her and Ted actually got together was pretty good, and she did bring us The Captain), her overall narrative arc is just going nowhere. The reveal of her motivation for trying to save the Arcadian may have been enough to win over Ted (which I can buy; it fits his character) but for the audience, it was too little, too late (and was there any good reason she couldn't have just admitted it from the beginning)? Ted having long-term relationships on the road to meeting the mother isn't inherently bad; it's just that Zoey is such a dull, inexplicable character on which to hang one such story.

The other story in this episode was much better. The whole "this drink has that effect" bit was probably too specific to fall into the "funny cuz its true category", but it was still funny, and it's always entertaining to see Lily in full on meddler mode, especially when she can drag someone else into it.

Other thoughts:
It was nice to see Ted finally calling Zoey on her BS and making her spend a night at the crapshack she's been trying to save.

Also appreciated the return of the cockamouse.

Ted: Look, I can handle you trying to prevent me from fulfilling a life-long dream. That's just being in a relationship. Considering this episode featuring two things to which I have mild to strong indifference towards (Fleetwood Mac and Kristen Chenowith), it turned out to be an okay episode. Despite the return of Sue, it was another solidly constructed episode that kept the wacky hijinks and wild plotting to minimum (by Glee standards at least...). If they're not careful, this run up to Nationals might just end being the show's most consistent run yet.

Also like last week, the show continued to mine its best material from the Brittany/Santana relationship while it's weakest material continued to feature Mr. Buttchin. It's kind of amazing how Brittany has managed to go from pure comic relief to a three dimensional character while still retaining her essential...Brittany-ness. At this point, the relationship between sweet and trusting Brittany and the Machiavellian Santana far outshines whatever is going on with the Rachel-Finn-Quinn-Sam quagmire, even if the show insists otherwise.

Things I Shouldn't Worry About: How in the world is April Rhodes writing, producing and financing a Broadway show from the ground up in the matter of, at most, days, to the point where its apparently a legitimate enough endeavor for Will to consider leaving the school to star in it? And really, would it kill April to delay the show, like, a month, if Will were to say he'd be in it once school was done for the summer?

Other Thoughts:
I really hope, next season, the writers come up with something new for Sue to do, besides one zany scheme to break up the glee club after another.

I have taken to calling one of my cats Lady Tubbington.

Favorite Song: Pass? Like I said, I'm not a huge Fleetwood Mac fan. I guess the song Artie did, which I'm not familiar with, but I always enjoy Artie solos and it was cleverly staged (all the guys with guitars). Otherwise, "Don't Stop", I suppose.

Brittany: Lord Tubbington is allowed to eat cheese because he's on Atkins.

Sam: Santana told me to never speak alone to you because you'd try to steal all of my gold.

April: You know what I call an afternoon getting drunk? An afternoon.


Community: A Fistful of Paintballs 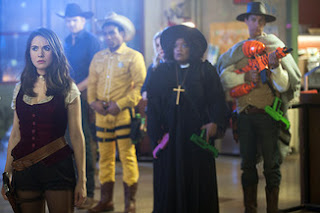 First, they decided to do another paintball episode. Then, they decided to make it a spaghetti Western pastiche (complete with re-styled opening credits and a soundtrack straight out of Morricone). Then they brought in Sawyer to play the Dark Rider (even though he doesn't ride anything). And then they finished it all off by putting Annie center stage through it all, and in that outfit. It all added up to one helluva Community episode.

Plus, like last year's paintball episode, this one wasn't just about parodies and jokes, but actually addressed ongoing character developments. While Modern Warfare dealt with the simmering Jeff/Britta sexual tension (and largely put it to bed, pun intended) this two parter is addressing the season-long issue of the group's relationship with Pierce, which, as Jeff and company rightly point out, has seen Pierce cast himself more as a villain again and again. The resolution to that thread, as much as the wacky hijinks that are sure to ensue as the Ice Cream Cone's commandos storm the school, has me excited for next week's finale. 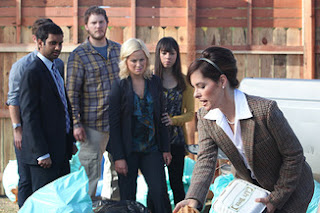 In the course of if its run, Parks and Rec has developed the city of Pawnee into a live-action Springfield, complete with whacky minor characters and town-specific characteristics (the citizens of Pawnee's frequently-remarked upon obesity, for example). In this episode, Pawnee got its Shelbyville in the form of Eagleton, the uppity neighbor city. While Pawnee town meetings frequently include calls to arson, Eagleton town meetings have gift bags stuffed with iPods.

The introduction of Eagleton and the director of its parks department, Parker Posey's Lindsay, also offers an explanation to one of the show's lingering questions: if a woman as driven and focused as Leslie is so determined to attain higher office, why is she still just the assistant parks director of Pawnee? Turns out she has passed up better opportunities to remain committed to her hometown. Her love of Pawnee, it seems, trumps even her ambitions.

Running alongside all the Eagleton business is the sheer hilarity of Ron becoming more and more unhinged as his birthday approaches and he has no idea what Leslie is planning to celebrate it. His slow decent into madness was pitch perfect (I particularly liked his horror at Chris' birthday greeting and the little flinch as Leslie opened the door to the conference room) and was the perfect setup to the reveal of his actual party: steak, whiskey and war movies for one.