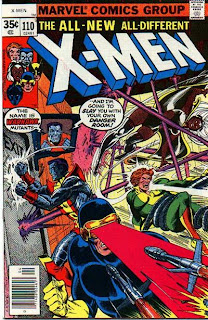 In a Nutshell
Warhawk turns the Danger Room against the X-Men.

Plot
It is Moira's last day in New York, and the X-Men are relaxing with a game of baseball. Moira leaves the game to greet the telephone repairman, but he turns out to be the villain Warhawk, who shoots Moira with a tranqulizer dart. Warhawk enters the computer center and reprograms Cerebro, removing the safety interlocks from the Danger Room. As he works, he is telepathically contacted by his master, who warns him against failing in his mission or betraying him. As the X-Men return to the mansion, Warhawk surprises Professor X and Phoenix, stunning them, and locks the X-Men in the Danger Room.

As the other X-Men fight for their lives against an unrestrained Danger Room, Nightcrawler teleports himself and Wolverine outside. The strain of it knocks both men unconscious, but Wolverine quickly recovers and cuts power to the Danger Room. Attacked by Warhawk, the two fight, with Warhawk telling Wolverine he was sent to test and evaluate the X-Men. Just then, the other X-Men break out of the Danger Room and Colossus knocks out Warhawk. The X-Men turn him over to the police, but Professor X worries that someone who knew far too much about the X-Men sent a telepathically shielded agent into their home, and that powerful forces seem to be aligning against them, while Wolverine asserts that the X-Men will be ready and waiting for whatever comes!

Firsts and Other Notables
The X-Men battle Warhawk, a fairly unremarkable villain existing on the fringes of the Marvel Universe (he's battled Iron Fist and Black Goliath previously, and will pop up again a handful of times in the future). Created by Claremont, he's a highly trained mercenary with Colossus-like organic steel skin. The later revelation that he was hired by Sebastian Shaw of the Hellfire Club, Warhawk's mysterious boss in this issue (who, not being a telepath, must presumably be using White Queen's telepathy to relay his message to Warhawk), thus tying Warhawk into the notable "Dark Phoenix Saga" story, helps him live on as a footnote in X-Men history (and also, retroactively, makes this issue Shaw's first cameo appearance). 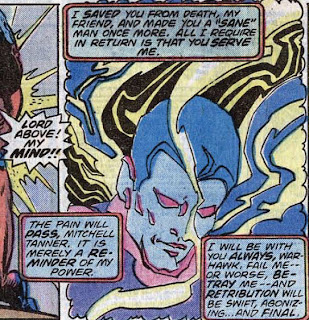 More notably, this is the first X-Men baseball game, something which becomes a recurring event in many of their "downtime" issues in the years to come. 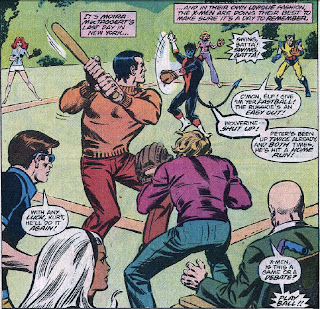 Also, Phoenix officially rejoins the team in this issue, concerned that she hasn't fully mastered her increased power after Warhawk gets the drop on her.

This is the first (and only) fill-in issue during the Claremont/Byrne run. According to a statement by Claremont in the letter column, this issue was commissioned months before its publication to give Dave Cockrum a breather, and was intended to occur immediately after the end of the Shi'ar arc. But after using another fill-in story for #106, and with Cockrum leaving after #107 and Byrne coming aboard for issue #108, editorial decided to hold this fill-in as long as possible so as not to have four different artists on four consecutive issues. So instead we get a pair of Byrne issues before the interruption occurs.

The art in this issue comes from Tony DeZuniga, an old school Silver Age artist who co-created Western DC hero Jonah Hex, and a stand-up gent whom I had the pleasure of meeting at SpringCon a couple years back.

The Statement of Ownership in this issue lists the average sales of the book in the preceding year to be 123,725 copies per issue, with sales of the single issue nearest the filing date to be 130,559 copies. I've heard tell that average sales of 100,000 copies per issue was the number a comic had to beat in order to stay in publication in those days, so X-Men at this time remained one of Marvel's lower selling titles (though those numbers would be HUGE today, where any issue approaching 100K is considered a massive blockbuster, and the cutoff for an ongoing series at Marvel or DC is more like 10K a month).

A Work in Progress
This events of this issue occur on Moira's last day in New York, and she will disappear from the title for several months. Also, Warhawk recognizes her and notes the absurdity of such a highly-renowned geneticist slumming it as a housekeeper.

Phoenix once again expresses joy at using her powers, and even quotes a line that will become synonymous with the later evolution of her character. 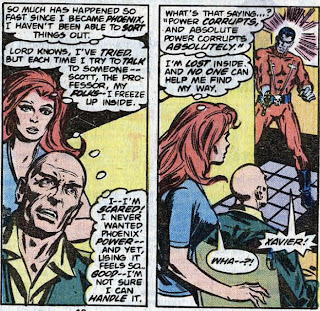 Colosso, the Danger Room robot whose previous incarnations were seen in issues #22 and #94, appears at battles the X-Men. 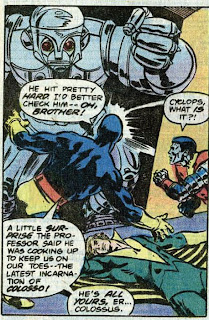 During the battle in the Danger Room, Wolverine sees an opportunity to let Cyclops be killed, which would give him a clear shot at Jean, but he saves Cyclops anyway since "back-shootin'" isn't his style (more great Wolverine dialogue). 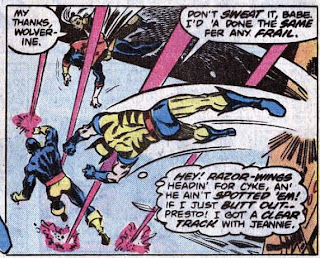 The issue ends with Warhawk being taken away by Captain Delaney, a Westchester police officer. He seems to have a history with the X-Men (Professor X says he often asks about the strange proceedings at the school and is put off when Xavier fails to give him satisfactory answers) but this is his first appearance. 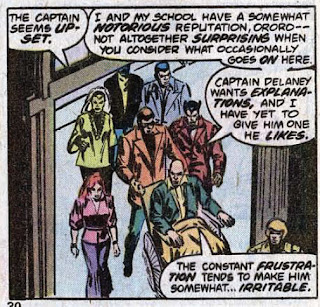 That 70s Comic
Warhawk has orders not to kill the X-Men, but he still goes out of his way to stun and not kill Moira. 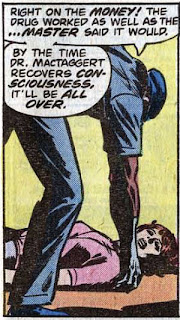 Colossus is apparently wearing his costume underneath his clothes while playing baseball. Also, Jean is rocking some awesome short shorts throughout the issue. 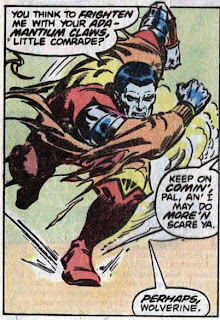 Claremontisms
Though presumably plotted months before it saw publication, Claremont clearly scripted (or re-scripted) this issue before it saw print, as it makes plenty of references to events of the past several issues, helping the issue read less like a fill-in.

Artistic Achievements
Dave Cockrum is thanked for "a welcome art assist" in this issue; he drew the opening splash page which sets up the baseball game.

Young Love
Wolverine broods over Jean (and her short shorts). 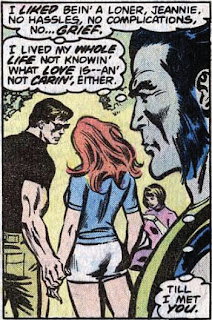 Moira alludes to her relationship with Xavier turning into a "nightmare". 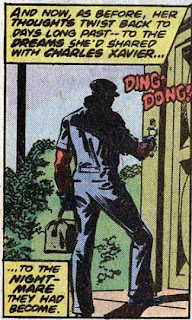 For Sale
Who wants their Hardy Boys and Nancy Drew t-shirts? 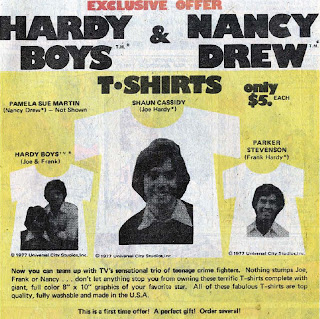 The Star Wars marketing machine is in full gear by now, as two separate ads appear in this issue. 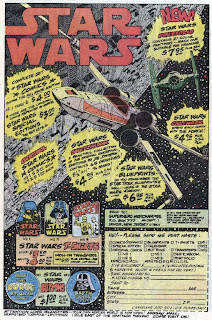 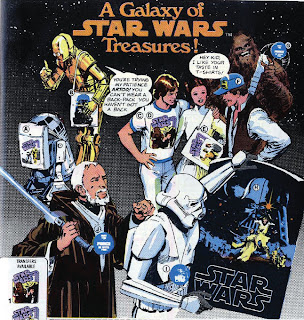 John Byrne on having a fill-in issue"...#110 was a fill-in because Marvel already had a finished issue and they wanted to use it. They said they had to use it. I've no idea why. Nobody could ever explain to me why they couldn't have waited another couple of issues."

Teebore's Take
The Claremont/Byrne run gets its first fill-in, and remarkably enough, it is the only fill-in issue of their entire run, an amazing achievement (you simply don't see something like that much anymore, an extended and acclaimed run with little interruption in the creative team; Bendis and Bagley's Ultimate Spider-Man is the only recent thing that comes to mind, and it's been several years now since their collaboration ended). Though the timing of this particular fill-in seems odd (as Byrne himself mentions), coming as it does just two issues after Byrne came aboard, in hindsight, it was probably published at the best possible time. Starting next issue, Claremont and Byrne really take off and, for the most part, never look back. Marvel had already paid for this issue and clearly intended to use it at some point; published here, between the end of one story arc and the beginning of the other, it doesn't greatly disrupt the ongoing narrative the way it would had it appeared later in their run.

Incidentally, the story itself is fairly routine, with the X-Men fighting the Danger Room (a popular setting for fill-in stories, apparently; the X-Men fought the manifestation of Xavier's dark side in the Danger Room in issue #106) before defeating the villain-of-the-month. Thankfully, Claremont's ability to weave the plot into the ongoing character development and the later reveal of Warhawk's boss (which helps tangentially connect this story to Claremont and Byrne's larger narrative) help keep the story from reading as completely pointless.
Newer Post Older Post Home
Posted by Austin Gorton at 8:00 AM