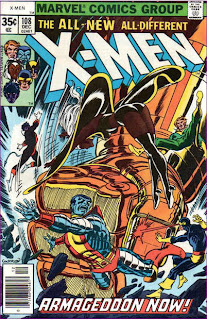 Plot
As the M'Kraan Crystal opens, Cyclops explains to the rest of the X-Men what is happening. Meanwhile on Earth, Dr. Corbeau confers with the President, the Fantastic Four and the Avengers, but no one knows how to prevent future reality blinks. Back on the planet of the M'Kraan Crystal, the first of the crystal's guardians, Jahf, emerges. After knocking Wolverine into orbit, Jahf is destroyed when Banshee, guessing the guardian to be a robot, destroys it with a tightly focused sonic scream. As Jahf is defeated, the second guardian, Modt, emerges from the crystal. 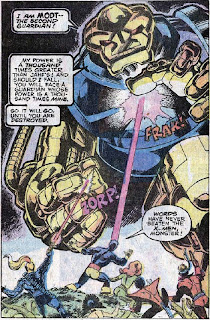 As the X-Men attack Modt, Raza hurls D'Ken onto the crystal, causing D'Ken, the X-Men and the Starjammers to be pulled inside. Within the crystal, they are all forced to face their worst fears and memories. Phoenix recovers quickly and knocks out Cyclops before his out-of-control blast can harm anyone, but he strikes the heart of the crystal, causing it to crack. Sensing that the crystal houses a neutron galaxy filled with anti-matter that, if released, will destroy the universe, Phoenix attempts to repair the energy lattice holding the galaxy in check. But as Phoenix, she is being of energy, and the neutron galaxy absorbs energy, so she must draw on the life forces of the X-Men and the Starjammers to boost her power. Manifesting herself as a fiery bird, Phoenix repairs the heart of the crystal, containing the neutron galaxy. On Earth, Firelord and Professor X stand guard at the stargate as the X-Men emerge, triumphant.

Firsts and Other Notables
This issue marks the beginning of the acclaimed Claremont/Byrne run as penciller John Byrne (along with inker Terry Austin) join the book as the new art team. A devotee of Neal Adams, Byrne brings a more realistic look to the book following the then-more traditional superhero art of Dave Cockrum. Together, over the course of the next 35 issues (barring one fill-in) Claremont and Byrne will craft one of the most notable runs of superhero comics ever, a run that is arguably the most significant in X-Men history.

It is revealed that Corsair, the leader of the Starjammers, is Cyclops' father, though only he, Phoenix and Storm are aware of it at this time. His real name (Major Christopher Summers) is also revealed. 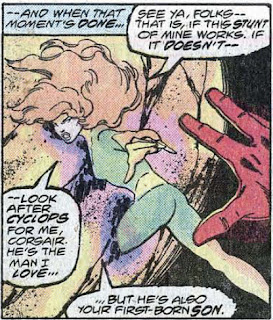 To a much lesser extent, this is the first appearance of the Starjammer's titular ship (though it looks different than it will in future appearances) as well as their computer/pilot Waldo. Guardians of the M'Kraan Crystal Jahf and Modt also appear for the first time; the former will pop up again years down the road.

A Work in Progress
As has been the norm of late, Wolverine charges headlong in battle and gets taken out of the fight early as a result; here, Jahf punches him into orbit. 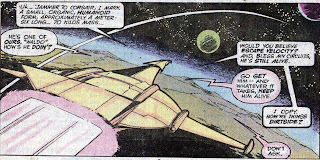 Shortly thereafter, Phoenix telekinetically grabs a passing meteor and drops it on Jahf, reveling in the power she feels while doing so. 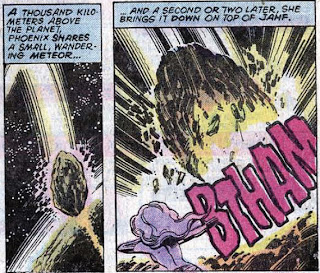 We get our first glimpse of Corsair's back story and our first look at Cyclops' mother in a flashback.

D'Ken is driven insane by his encounter with the crystal, and Lilandra is poised to claim the throne once her legal entanglements are cleared up. 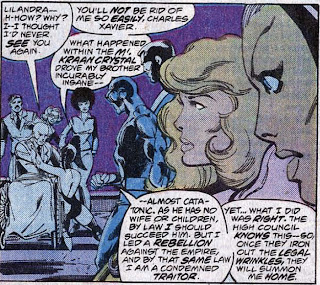 The Classic X-Men reprint adds some additional pages which foreshadow the Dark Phoenix Saga and suggests that Phoenix transformation in that story is, in part, a reaction to her actions in this one. The backup details the events of Corsair's first meeting with his fellow Starjammers.

A flashback in the next issue will fill in some of the details about what happened between Phoenix repairing the crystal and the X-Men appearing on Earth.

That 70s Comic
Jimmy Carter is the President seen conferring with Corbeau, the Fantastic Four and the Avengers. 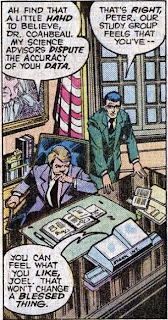 Claremontisms
Following from the suggestion last issue that the X-Men are more than superheroes, the opening pages of this issue, in which the Fantastic Four and the Avengers (Marvel's more "superhero-est" superheroes) essentially throw up their hands in the face of Armageddon, could be read as Claremont saying that it will take something more than traditional superheroes to save the day this time.

Artistic Achivements
The issues ends with a special thanks to departed X-Men artist Dave Cockrum, followed by Dave's rejoinder.

Young Love
Lilandra ends the issue exiled on Earth for the time being and reunited with Professor X. 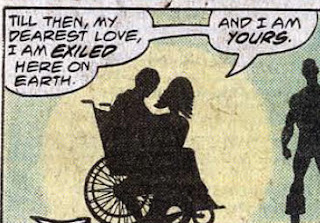 The Awesome and Terrible Power of Cyclops
It is Cyclops' blast, while he is experiencing nightmares of losing control of his power, that hits the latticework of the crystal and threatens to unleash the neutron galaxy. So he's kinda responsible for putting the universe at risk too. 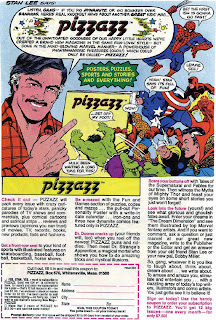 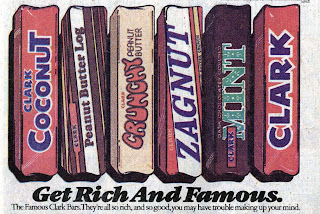 It's in the Mail
John Byrne pens a welcome missive to the readers. 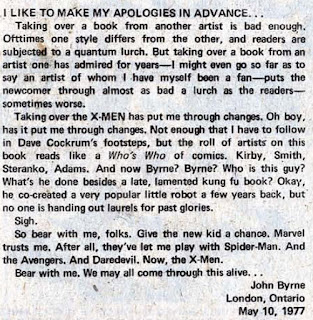 Claremont on John Byrne's assignment to X-Men
"At the time, John and I had been working on Iron Fist together, and I think we were also doing Marvel Team-Up. We were just going great guns together. John's last issue of Iron Fist was essentially his audition for X-Men and after that it was a no-brainer. John was dead brilliant. He could nail his deadlines and he loved the X-men characters. We were still speaking to each other in those days and he wasn't at the point in his career where they were going to put him on Spider-Man, Fantastic Four or any of the big books. We also wanted to make X-Men monthly and we figured John would be the guy to do it."

John Byrne on getting assigned X-Men
"The way I usually phrase it is, I had threatened everybody at the office with bodily harm if Dave Cockrum ever left the book and it didn't come to me! ...With lousy distribution in Canada and weird Canadian postal service stuff - which said that first issues don't count as periodicals, so they don't allow them into the country - I very rarely got any issue #1s. But X-Men I picked up from the very first issue, and I was totally blown away by it. I just fell in love with the characters. When I finally got to do the book, it wasn't really them. It was something called X-Men, but it had Cyclops and he was the one that counted as far as I was concerned."

Byrne on Claremont's plot for issue #108
"Chris used to write fifteen page plots for seventeen page stories and that's not an exaggeration. He would literally write almost as many pages of plot as there were story pages. He would go off on tangents and fill his plots with acres of stuff that I, as the penciller, really didn't need to know. I remember our first issue because it was a giant 'hoo-hah!' story and a lot of material had to be covered. The storyline had been running for months and X-Men was only coming out bi-monthly at the time. Shooter wanted the storyline wrapped up and used my coming on to the title as an excuse for Chris to finish it."

Teebore's Take
Claremont is joined by John Byrne as the first act of his Phoenix saga comes to a close, but it's Claremont's prose that really sells this issue, as most of Phoenix's actions to repair the crystal and save reality are described via caption boxes rather than shown in the art. In the process, Claremont presents some heady material, invoking the Kabbalah Tree of Life, with Colossus as its base and Professor X as its crown, with each X-Man assigned a place and purpose greater than themselves, as Phoenix draws strength from the X-Men and Professor Xavier's dream to bind together the energy latice holding back the power of the galaxy within the crystal. Though he perhaps overreaches a bit (he has only seventeen pages, and D'Ken, along with his whole "trying to harness the power of the crystal" plot, gets lost in the narrative), Claremont's ambition can't be faulted. He prods at (without fully exploring) some fascinating ideas about love, sacrifice, and the nature of reality, all rendered in his already-trademark prose style. Ultimately, it is unlike anything we've seen in an X-Men comic thus far.

The first time I read this issue, it blew me away: I didn't fully grasp what Claremont was going for, but there were clearly BIG IDEAS on display, something more than the usual superhero/supervillan showdowns. It drew me in, and I still recall fondly how entranced I was by it all back in the day. This issue also marks the first time in my X-Men reading that I thought, "crap, how are they going to get out of this one?", as the X-Men barely defeat the first guardian of the crystal only to be told the next is one thousand times more powerful, and should they defeat him, the next will be another thousand times stronger. Though its highs will be exceeded in the course of Claremont and Byrne's partnership, this issue is a fitting kickoff to one of the most celebrated runs in comic book history, and a personal favorite.
Newer Post Older Post Home
Posted by Austin Gorton at 8:00 AM