To Better Know A Hero: Thor 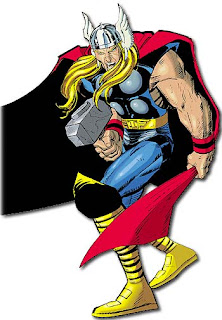 Forsooth! Verily, Thor doth star in a new film, in theaters now! Before seeing thy film, feast thy eyes on these runes to vanquish thine ignorance about the mighty Thor!

Powers and Abilities
Thor possesses super-human strength, speed, endurance, durability and longevity thanks to his godly nature. He is also a skilled warrior. 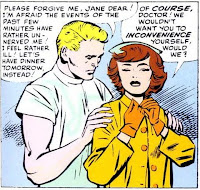 Gadgets and Accessories
Thor wields a nearly-indestructible hammer named Mjolnir, composed of mystic Uru metal. With the hammer, Thor can fly, manipulate the weather, absorb and project certain kinds of energy, and open dimensional portals. The hammer is enchanted such that only those worthy of its power can lift it. 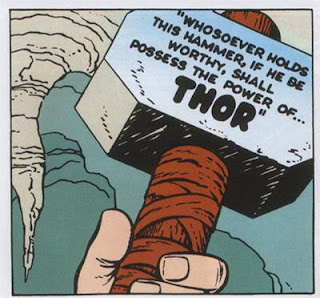 For a time, after being cursed by Hela, Thor also wore armor which held together his broken body. 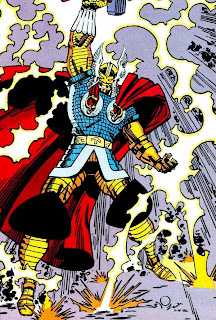 Movies and Appearance
Thor was part of the Marvel Super Heroes animated series in the 60s, receiving thirteen episodes devoted to him. Since then, he has made guest appearances in most of Marvel's major animation ventures. He also guest-starred in the live action Incredible Hulk Returns TV movie, played by Eric Allan Kramer. 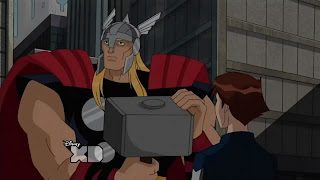 And of course, his feature film debut is in theaters now, with Thor being played by Captain Kirk's dad. 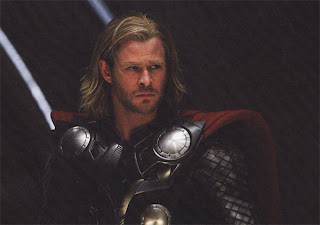 One-Sentence Origin
Cast out of Asgard and given mortal form by Odin to learn humility, Dr. Don Blake was eventually drawn to Norway where he discovered a walking stick that, when struck, transformed him into the mighty Thor! 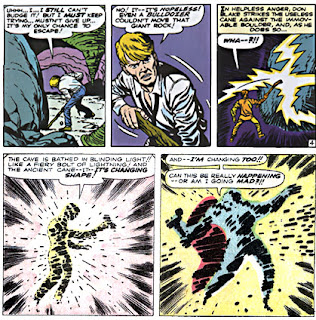 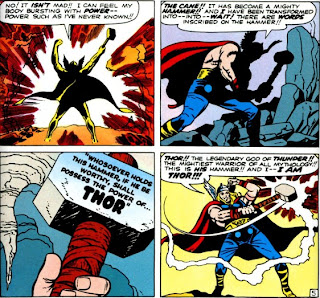 Memorable Moment
Thor #364-366 Thor is transformed by Loki into a frog, and the story doesn't just not suck, but is actually tons of fun. 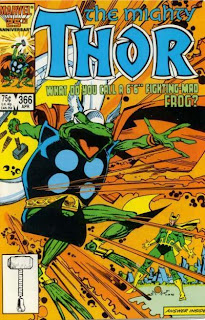 Teebore’s Take
Though Thor often gets compared to DC's Superman, being the benchmark for power in their respective superhero universes, Thor actually has much more in common with DC (nee Fawcett's) Captain Marvel, that of the mortal who transforms into a god-like hero. Like Captain Marvel (who manifests whenever Billy Batson shouts "Shazam!"), Marvel's take on Thor has often featured one otherwise normal person or another transforming into Thor. Stan Lee first hit on this idea when he created the superhero Thor in the 1960s: by having the lame Dr. Don Blake transform into the powerful Thor, he created a supremely powerful character while keeping the door open for the kind of comic book shenanigans that were required when writing comics during the Silver Age: a character torn between two world, struggling to balance his real identity with the super-heroic one, and all the romantic entanglements that follow. Though the character has since shed the Don Blake secret identity and currently exists as a whole character in and of himself, he will, from time to time, become entangled with a mortal guise (usually whenever a writer wants to tell more "down to earth" stories with a godlike main character). 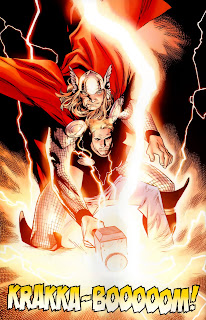 As a kid, long before I started reading comic books, I was obsessed with Greek and Norse mythology. While my love of mythology was a big influence on my love of super hero comics in general, it also gave me a special fondness for Thor, as his adventures tended to feature depictions of characters and events I'd read about in books on Norse mythology. 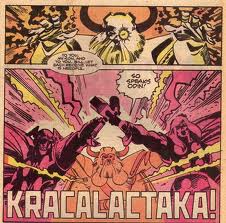 It also helps that Thor is one of the most "comic book-y" characters, prone to outrageously fun, over-the-top adventures, all punctuated by that unique faux-Shakespearean dialogue and some of the best sound effects in comics. 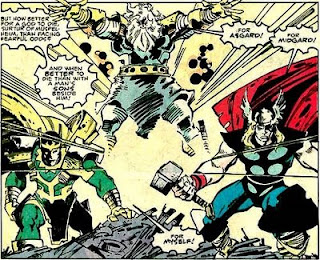