A short one this week as the run-up to SpringCon and birthdays busied up the week (and I'm out of town again). Hopefully I'll get caught up this week.

How I Met Your Mother: Landmarks 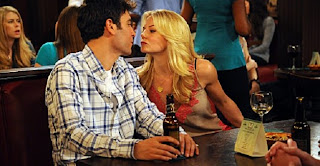 Well, at least Zoey is gone. "Sometimes things have to fall apart to make way for other things," Ted said, a perfect coda to their relationship and, if not this season of HIMYM, then at least the portion of the season dealing with their relationship. Hopefully, now that the deck has been cleared of Zoey, something much better is on its way, for Ted and for us.

This episode did a nice job of reinforcing exactly why Zoey didn't work as a character: Ted's affection for her always outstripped the audience's. He fell in love with her while we just saw a selfish, one dimensional character. The GNB Tower vs. the Arcadian debate has never, ever been as cut-and-dry as Zoey would like us to think, and while Ted showed himself willing to see her side of things, she never did the same for him (as Mrs. Teebore said, if Ted and Zoey's entire relationship hinges on whether or not he sides with her, then Ted, she's not the mother of your children). Last week's reveal that Zoey's desire to save the Arcadian stemmed from her having lived there as child (in addition to coming far too late) generated sympathy in Ted but simply underlined to the rest of us that even at the core, Zoey's motivations for saving the building were selfish. By the time she whipped out that tape of Ted at the museum, I wanted to reach into the screen and punch her.

But at least she's gone now.

Other thoughts:
Glad as I am that Zoey's gone, that break-up wasn't nearly as epic as we'd been promised.

The humorous highlight of the episode was Marshall's legal rhymes.

Barney: My job is my identity. It gives me the confidence I need to convince girls I’m a fighter pilot. 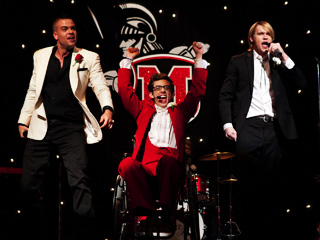 Another solid "back to form" episode. Though some individual parts didn't work (we'll get to them in a minute) Glee has always been a show that, at its best, is better than the sum of its parts, and the whole of this episode, like the last couple, felt very much like Glee done right, a show where disparate people come together and find, for the few minutes it takes to perform, an escape from the realities of their respective worlds.

While spoilers for this episode ran rampant, I more or less avoided them, and was genuinely stunned when Kurt was announced as the Prom Queen. Despite having been more or less beatified to the point of unreality this season, watching him break down and get built back up in a couple scenes in order to trembling accept the coronation was affecting, one of those moments that kinda breaks the fourth wall by making its message obvious but which you don't mind because the message needs to be said (loudly).

So, missteps. Jesse's return was random and odd, and Rachel's acceptance of him didn't sit right with me (my feelings about Jesse run more in line with Finn's). I'm curious if he's going to be around more after this, or if he just came back as a one-off. I wouldn't mind seeing him flit in and out as a semi-recurring villain, but I feel the show's already wrung what it can out of any Jesse/Finn/Rachel/etc. romantic drama. Also, while I liked that the big Rachel/Quinn DRAMA showdown that all the commercials featured ultimately amounted to very little (and loved Rachel's line about appreciating the drama of getting slapped), I'm a little unclear as to why Quinn blamed Rachel so vehemently for not getting elected (unless she was just mad that Finn wasn't there when they lost, in which case, the show should have made that more clear and again, still isn't really Rachel's fault. But whatev).

Stuff I Shouldn't Worry About:
I'm pretty sure Breadsticks wouldn't allow three people to split one All You Can Eat Pasta meal, but whatever. And how would Santana have sung "Dancing Queen" if she'd been crowned Queen? Why was that one kid at the prom wearing a Bluetooth? Also, why the hell did Figgins announce Kurt as the Prom Queen when it was clearly at best a prank and at worst a bigoted attack? Figgins can be clueless but he's generally never been shown to be that clueless, and I have to think any administrator would check the results before announcing a winner. And then to actually go ahead and have them dance (especially given what Figgins knows of Karofsky and Kurt's history together)? Really?

Other Thoughts:
Rachel's performance of "Jar of Hearts" was pretty good, but she really needs to stop admonishing Finn for leaving her when she cheated on him. Also, Mrs. Teebore thought it wasn't a very good song for prom (being that it's not very romantic) but it's been my experience that, like weddings, high school dances often play songs that only sound romantic if you don't listen to the lyrics (like "Every Breath You Take").

Oh, Glee, when you do things like cover that stupid "Friday" song, it makes it really hard for me to defend you. That said, like the original song, it was kinda infectious even while being incredibly insipid.

Sue works much better as an over-the-top authoritarian than as a super-villain scheming to destroy the glee club every episode. Her scenes in this episode were as funny as ever without being nearly as problematic.

I love that Figgins had apparently hired Air Supply to play the prom for $400.

Was it just me or did Finn and Jesse spend about an hour-and-half pushing each other? Throw a punch already!

Favorite Song: "Rolling in the Deep". Jesse's return was odd, but he and Rachel have always sounded good together, and I liked the arrangement on this one.

Puck: Our campaign strategy is to close the gap by using a combination of intimidation and fear.
Jacob: Awesome and classy.

Sue: John McCain is rolling over in his grave

Santana: Just because I hate everybody doesn't mean they have to hate me, too. 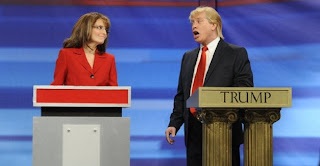 Tina Fey's latest return to SNL, whilst six months pregnant and less than a week after the annoucement of Osama Bin Laden's death was dominated by those two things, and the result was one of SNL's strongest episodes of the season.

Of the pregnancy-themed bits, my favorite was the old-fashioned birthing video, from the wackiness in the video itself to the reactions from its audience that ranged from cracking wise to sheer terror. Seth Meyers got in some great Osama material during "Weekend Update" (Obama being "the first black person ever to have to prove he killed someone", and the idea that no matter what he does, he can't please 44% of the country) but the most inspired Osama sketch was "Below the Waves", one of those bizarre-in-a-good way bits SNL pulls out occasionally. Maybe I'm just dense, or maybe it's to the writers' credit, but I had no idea where what appeared to be a dated Little Mermaid parody was going until "Sebastian" was hit by the corpse of Osama, even though it should have been obvious.

Favorite Sketch: Tough call. I thoroughly enjoyed the "Undeclared Republicans" debate, which saw the return of Fey's Sarah Palin and tons of great political humor ("It's just so great to be back on Fox News, the network that pays me and shows me the question ahead of time. I just hope the lamestream media won't twist my words by repeating them verbatim."). The digital short, featuring Michael Bolton was my favorite since "I Just Had Sex". But absolutely nothing made me laugh harder than Stefan's latest "Weekend Update" appearance. By the time he got to "Jew Diamond Phillips" I had about lost it.