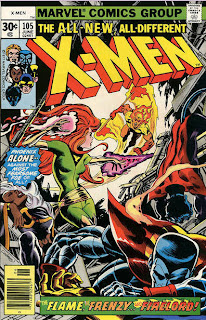 Plot
Returning to the mansion, the X-Men discover Erik the Red lying in wait and attack him, unaware that he has convinced Firelord, a former herald of Galactus, that the X-Men are villains. Seeing the X-Men attack Erik, Firelord comes to his aid and he swiftly defeats the X-Men. Meanwhile, Shi'ar Princess Lilandra Neramani teleports from her ship to Earth just as her vehicle is destroyed by a pursuing craft. Professor X is visiting Jean at her New York apartment when Lilandra appears, and Xavier recognizes her from his visions. 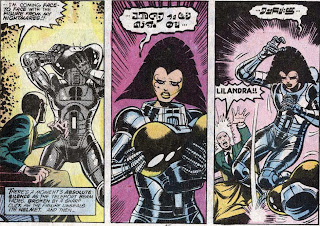 Just then, Firelord, at Erik the Red's urgings, arrives to confront Xavier, but is blocked by Phoenix. The two fight their way across the city, leaving Xavier and Lilandra to be captured by Erik the Red. Erik quickly constructs a stargate, and the X-Men arrive too late to prevent him from escaping through it with Lilandra. Xavier, having read Lilandra's mind and learned of her mission, insists that the X-Men must help her. Phoenix arrives, having defeated Firelord, and is able to use her powers to reactive the stargate, allowing the X-Men to pursue Erik and Lilandra.

Firsts and Other Notables
Shi'ar Princess Lilandra Neramani appears in full for the first time (and her first name is given). We learn that she was once the Grand Admiral of the Shi'ar fleet and is currently leading a rebellion against the emperor, her brother, because she believes he plans to destroy the universe.

We also learn that Erik the Red is Shakari, a Shi'ar Intelligence agent who was exiled to Earth by Lilandra. 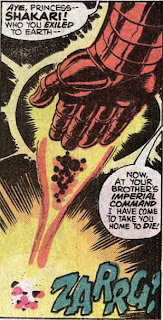 Phoenix battles Firelord, one of Marvel's various "cosmic" characters, and a former herald of the world-devouring Galactus.

As is, this issue opens rather abruptly, with X-Men in the midst of attacking Erik the Red at the mansion. Added pages in the Classic X-Men reprint help smooth the transition between issues.

Tom Orzechowski letters this issue; he'll return in a few issues and begin a lengthy run alongside Claremont, creating a lettering style that will become synonymous with X-Men, as well as design the logos for the New Mutants and Wolverine spin-offs.

Also, in case you're wondering, according to the Shi'ar Earth is an M class planet that registers 4.7 on the Varakis scale. They also have a Prime Directive. And in a bit I've always rather enjoyed, the crew of the Shi'ar ship pursuing Lilandra promptly freak out when they learn that Earth has repelled Galactus four times in recent history. 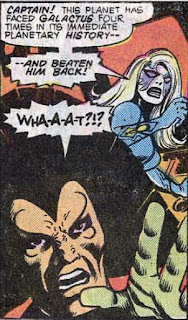 A Work in Progress
It is established that Nightcrawler can't teleport unless he know exactly where he's going. Later stories will reveal that he can teleport to an unknown destination, but that there are risks involved.

Havok and Polaris appear, still thralls of Erik the Red.

Professor X gives Lilandra a telepathic crash course in English, which is, I believe, the first such use of his power. Along the way, he discovers what it is she's attempting to do, and commits the X-Men to helping her.

The X-Men arrive in New York City via hover jet, which is, of course, promptly destroyed. 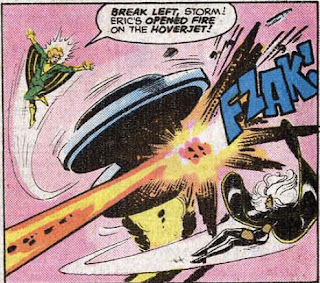 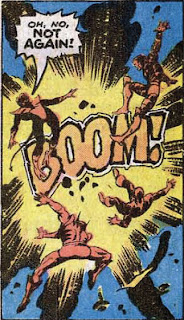 More bickering between Wolverine and Cyclops. 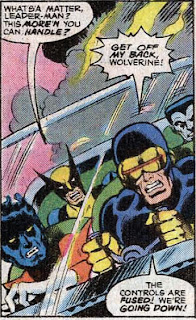 Phoenix notes how powerful she's become, and how exhilarated she is by using her powers. 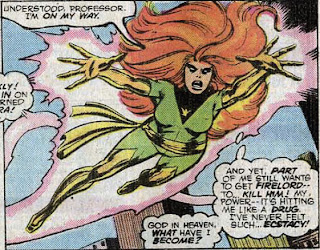 Jean's parents, who are visiting Jean and Misty Knight along with Xavier when Lilandra arrives, witness the full extent of their daughter's abilities for the first time. 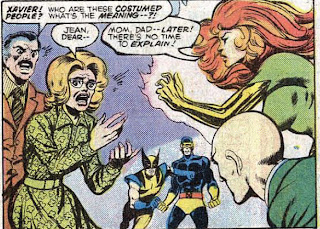 That 70s Comic
In another fourth wall-breaking bit, Chris Claremont and Dave Cockrum appear in the comic, discussing the creation of the comic in which they are appearing, before fleeing from the Phoenix/Firelord battle. 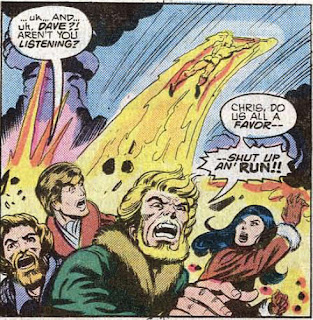 Cyclops apparently knows, offhand, the amount of energy it takes to power an "inter-stellar transporter". 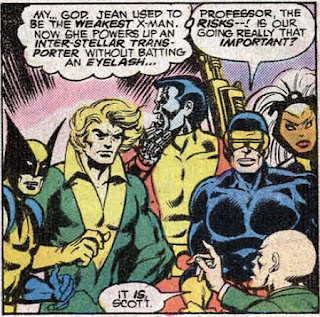 For Sale
Love the title of this one. 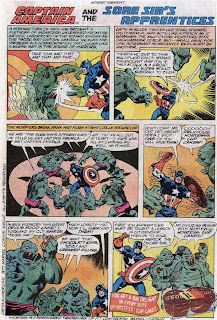 Teebore's Take
After simmering in the background, the long-running (going back to issue #97) Erik the Red story comes to a head. Lilandra finally makes contact with Xavier and the X-Men (at least Xavier) learn what it is Lilandra is trying to accomplish (it'll be a couple issues before the rest of the team, and the readers, learn exactly what's going on). But really, this issue is all about showing off Phoenix's abilities. After her transformation in issue #101, Jean has done little besides recuperate in a bed, and so Claremont and Cockrum take an issue to showcase her increased power before sending her off into the climax of their big overarching story.

Both creators have been quoted as saying their intention was to put her up against someone like Thor as a point of comparison, but that idea was apparently nixed by editorial (Cockrum claims it was because of sexism, of editorial not wanting to see one of Marvel's powerful male characters going toe to toe with a woman). So instead we get Phoenix fighting Firelord, a character who, in his last appearance, battled Thor to a standstill (in this issue, Firelord even thinks that the last person to hit him like Phoenix was Thor). This way, Claremont and Cockrum managed to sidestep editorial and have Phoenix battle Thor by proxy. Firelord is no Thor in terms of character recognition, but by issue's end, Claremont and Cockrum have made their point: Phoenix is hella powerful.
Newer Post Older Post Home
Posted by Austin Gorton at 8:00 AM