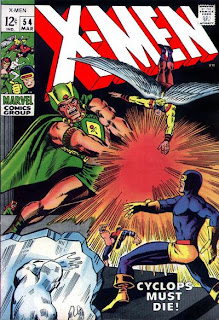 In a nutshell: The X-Men meet Cyclops' brother and battle the Living Pharaoh.

Plot
The X-Men are attending the college graduation of Cyclops' younger brother Alex, expressing some surprise at Scott having never told them about his brother. After the ceremony, Alex returns to his dorm to change and is kidnapped by men dressed like ancient Egyptians. The X-Men arrive at Alex's room and see signs of a struggle, and Marvel Girl is able to telepathically tracks the kidnappers. Elsewhere, Alex awakens, a captive of a man calling himself the Living Pharaoh. The Pharaoh tells Alex they are both mutants and that Alex is the only one who can oppose him, then prepares to kill him. The X-Men arrive just then, and the Pharaoh and his men escape during the ensuing battle. The X-Men leave Cyclops and Alex alone to discuss Cyclops' dual identity when the Pharaoh returns, stunning both of them. 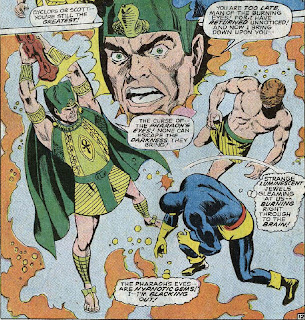 Cyclops awakens in the Pharaoh's lair to find the police accusing him of murdering the Pharaoh, whose body is nearby. Alex is also missing, and Cyclops worries that he may have accidentally killed the Pharaoh and fled in confusion. Overpowering the guards, Cyclops leaves through tunnels below the base, looking for Alex. The X-Men overhear a radio report about a police manhunt for Cyclops while back in the tunnels, Cyclops is confronted by the still-living Pharaoh.

2nd Story: "The Million Dollar Angel"
Young Warren has an inclination for high places. His parents, unable to cope with his adventurous spirit, send him to boarding school. Warren is initially very popular and a successful athlete, but once he discovers wings growing out of his back, he isolates himself from the other students in order to keep them a secret. Later, a fire breaks out in the dormitory, and Warren is able to use his wings to escape to safety. Stealing a wig and a nightgown from the theater storeroom, he disguises himself as an Angel in order to free his classmates from the burning building. 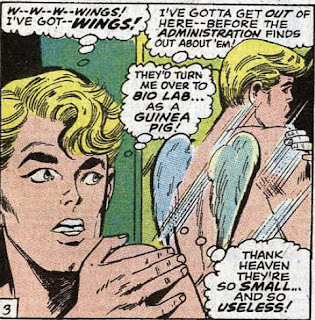 Firsts and Other Notables
Cyclop's heretofore unknown younger brother Alex (the future Havok) appears for the first time. He will eventually join the team off-and-on for various stints of time, as well as lead the government-sponsored X-Factor team. It will be revealed that Scott and Alex were in an orphanage together after bailing out of their parent's crashing plane, but that Alex was adopted while Scott stayed behind until he eventually ran away (as seen in the first "Origins of the X-Men" backup story) and joined the X-Men.

The Living Pharaoh is also introduced. He remains a minor X-Men villain, though for someone who is very much an Adam West's Batman-style villain, he perhaps gets more play than he deserves, most notably as one of "The Twelve", when that long-running storyline got poorly resolved around the turn of the century.

This is Arnold Drake's final issue as writer, and he curiously exits after kicking off a new story in both the main feature and the backup.

A Work in Progress
Cyclops has kept the existence of his brother a secret from the X-Men (including his telepathic girlfriend) for some reason, presumably because he's just that closed off and introspective. 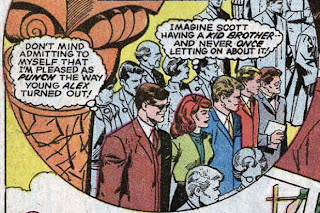 Alex's introduction as a college graduate has unintended consequences on the issue of the characters' ages. This issue explicitly suggests that Cyclops must, at least, be 22 years old by now (assuming he's at least a year older than his younger brother). The Official Marvel Index in the 80s tried to explain this away by saying Alex was a child prodigy, but this issue also establishes that he's a star athlete, which seems unlikely if he's significantly younger than his classmates. This is further evidence that, at this point, the characters are supposed to be aging in real time (being roughly 16 when X-Men #1 was published in 1963, and 22 now, in 1969) which doesn't fit with Marvel's current approach to the passage of time, which uses a sliding timeline in which the Fantastic Four's origin occurred a perpetual "ten years ago" and significant events (like the Vietnam War) are retroactively adjusted to more current or less-specific events. So for the most part, the details of Alex's introduction to the X-Men are ignored.

Similarly, Angel's origin story is referenced as occurring in 1963.

Marvel Girl uses her telepathy to pick up the thoughts of Alex's kidnappers after they've left the room, a new use for telepathy. 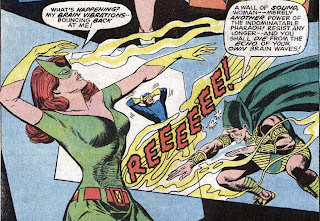 The Living Pharaoh believes that all the past pharaoh's are mutants. He is mistaken, as Apocalypse, born in ancient Egypt, is considered the first mutant, and there were pharaoh's which preceded his birth.

Alex's hair is colored brown in this issue and the next, though he'll be blond shortly thereafter from that point forward and retroactively.

Ah, the Silver Age
Scott speaks as though it's a given that someone would make a name for themselves as a college athlete. 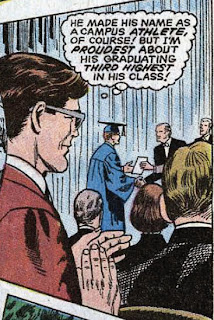 Alex is captured and Cyclops hypnotized because, after seemingly defeating the Living Pharaoh, the X-Men leave Cyclops and Alex alone in the villain's lair to have a heart-to-heart. Instead of, you know, leaving and doing that somewhere more safe.

Later, the police somehow know the Pharaoh is so called, despite his apparent death. Granted, he's dressed like a pharaoh, but they're awfully specific about his name.

Young Warren somehow remembers that he was never afraid of heights as a baby. 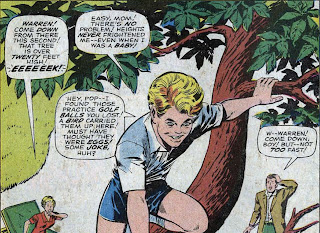 Warren's Angel disguise consists of a long blond wig (which disguises his...blond hair) and a nightshirt, but it does the trick, and no one recognizes him. 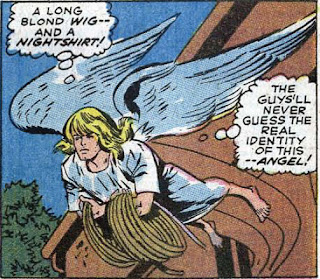 The Egyptian Living Pharaoh, and his Egyptian henchmen are, of course, depicted as Caucasian. 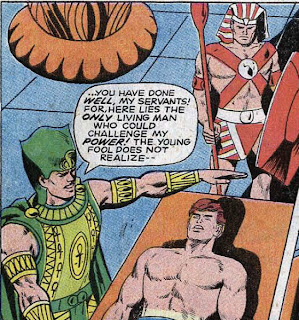 Human/Mutant Relations
The police express their distrust for mutants. 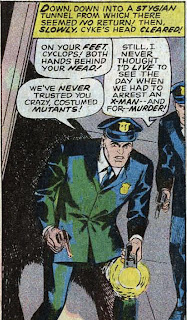 For Sale
"Join the swinging world of music" by learning to play the accordion and you'll be at the center of "exciting hootenannies"! 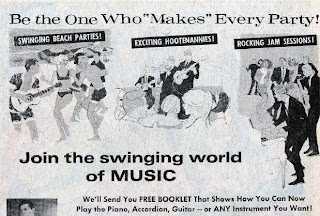 Teebore's Take
Arnold Drake's relatively short run comes to an end just as he kicks off a pair of stories. Sandwiched between the even briefer Gary Friedrich run and the acclaimed Thomas/Adams run, Drake's tenure generally gets overlooked or outright forgotten, as many mistakenly attribute his contributions to X-Men history to Roy Thomas. But in his short time, Drake did make significant and lasting contributions to the book. He brought to an end the failure that was the "disbanded X-Men" plot, and introduced both Lorna Dane (who would go on to become Polaris) and Alex Summers (later Havok), two mainstays of the team, as well as two lesser but recurring villains in Mesmero and Living Pharaoh.

As for this issue, it's standard stuff, though Don Heck, providing both layouts and finished pencils for the first time in awhile, abandons the standard panel grid for something a bit more contemporary (akin to what Steranko was doing several issues ago). I don't know what triggered the change, but it eerily predicts the arrival in two issues of Neal Adams, an artist whose work revolutionized comic book art.
Newer Post Older Post Home
Posted by Austin Gorton at 8:00 AM