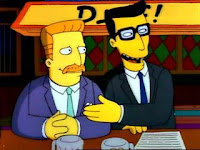 Or the One Where: Mr. Burns sells the nuclear power plant to Germans.

The Setup: A depressed Mr. Burns contemplates selling the power plant in order to have more time to pursue other interests.

The "Land of Chocolate" sequence was not in the original script (the dialogue referring to it was, but the actual dream sequence was added later).

Favorite Lines:
Broker: Your stock in the power plant just went up for the first time in ten years.
Homer: I own stock?
Broker: Yes, all the employees got some in exchange for waiving certain Constitutional rights.

Homer: Marge, it's not the money. My job is my identity. If I'm not a safety whatchamajigger, I'm nothing!

German: You have been safety inspector for two years. What initiatives have you spearheaded in that time?
Homer: Uh... All of them?

Horst: Attention workers, we have completed our evaluation of the plant. We regret to announce the following lay-offs, which I will read in alphabetical order: Simpson, Homer. That is all.

Lisa: I made a new bar of soap by squeezing all our little soap slivers together!
Marge: That's very clever.
Bart: And today, instead of buying comic books, I just read 'em and left 'em in the store.
Marge: Mmm... You shouldn't do that.
Lisa: My jumprope broke, but I just tied it back together.
Marge: That's good, Lisa.
Bart: I didn't take a bath today, and I may not take one tomorrow.
Marge: I want you to take baths, Bart. 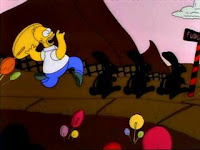 Teebore's Take: Largely remembered for Homer's "Land of Chocolate" dream sequence (in which he imagines a literal land made of chocolate during a performance review), this episode may have also been an influence on me studying German throughout high school and college. While Homer is the focus of the story, this is the first episode of the season to also showcase Mr. Burns, as his malaise triggers the events of the story, and he is followed throughout the episode as he comes to understand that money does him no good if it can't inspire terror in his fellow man. Interestingly, after being the writers' go-to supporting character in season two (with four episodes heavily featuring him), Mr. Burns doesn't take center stage until exactly halfway into the third season. One of the strengths and appeals of The Simpsons is the depth and breadth of its supporting cast, and many of the most classic episodes deal with the development of that cast. As the best years of the show kick into gear, the writers are clearly spending time on other characters while letting one of their already well developed and popular characters wait in the wings.

Remembered best for the Land of Chocolate sequence, there's also some fun Mr. Burns and Homer moments, as well as some great humor at the expense of the Germans. 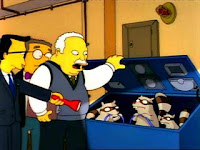