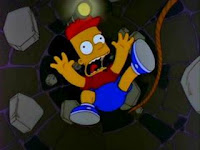 Or the One Where: Bart gets stuck down a well.

The Setup: Using a radio microphone he got for his birthday, Bart fools the town into thinking a boy is trapped down a well, but when Bart attempts to retrieve the radio, he falls into the well for real.

Notable Notes
Bruce Springsteen was originally approached to guest star in the episode but he turned it down, so Sting appears instead.

According to the DVD commentary, the producers originally wanted the commercial for the Superstar Celebrity Microphone to feature Gordon Lightfoot's "The Wreck of the Edmund Fitzgerald" but went with C.W. McCall's "Convoy" after learning that Lightfoot had arranged it so that in order to clear the copyrights for the song, they'd have to get permission from each of the families of the twenty-nine sailors who died on the ship. 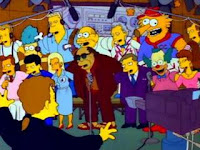 Kent Brockman: The time has come for finger-pointing, and most of them are squarely aimed at the boy's parents. Homer: It's not our fault! We didn't want the boy, he was an accident!
Marge: Homer!
Homer: Uh... Could you edit that last part out?
Kent Brockman: Mr. Simpson, we're live, coast-to-coast.
Homer: D'oh!

Marge: Sting, you look tired. Maybe you should take a rest.
Sting: Not while one of my fans needs me.
Marge: Actually, I don't know if I've ever heard Bart play one of your albums.
Homer: Shhhh. Marge, he's a good digger! 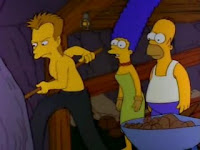 Teebore's Take
I tend to overlook this episode, recalling it as "okay" when running down a list of episodes, but it's actually quite good. A send-up of media circuses and celebrity activism, it's also hilarious, with something funny to be found in every act (especially Bart's birthday party at Chuck E. Cheese knockoff Wall E. Weasel and Sting's hilariously over-the-top benefit song). "Radio Bart" is also one of the stronger Bart episodes, encompassing a wide range of character, from lovable loser to gleeful prankster to contrite mama's boy. The ability to effectively balance character work, humor and social satire is what makes The Simpsons great (and what most of the episodes during its Golden Age do), and this episode is a fine example of it.

Another classic whose skewering of media circuses and celebrity activism is as apt today as it was when it originally aired. 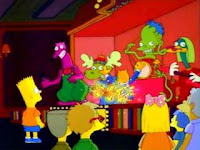