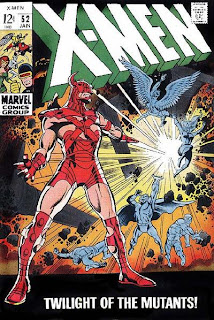 In a nutshell: The X-Men defeat Magneto and Mesmero, and prove that Magneto isn't Lorna's father.

Plot
Mesmero orders his guards to kill the captured Erik the Red, but Erik easily defeats them and then collapses the roof, trapping them. He then proceeds towards Magneto, but Lorna intervenes, reluctantly defending her father. But Erik tells Lorna he is there to join Magneto, not to slay him, and Magneto, still paralyzed, accepts his help. 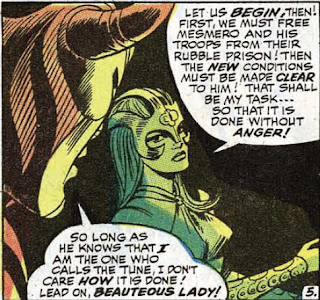 Sometime later, Marvel Girl receives a telepathic alert from Cyclops that "Operation: Twilight" is in effect, and she summons Angel and Beast (Iceman is left out for fear of his conflicted loyalties). The three X-Men sneak into Mutant City and are spotted by Erik, who reveals himself to be Cyclops in disguise. They setup a trap to disable Mesmero and his guards, but Iceman arrives and accidentally triggers the trap. Mesmero discovers the team, and a battle breaks out between the X-Men and the guards. Iceman slips away and gives Lorna evidence that Magneto isn't her father. Grateful not to be bound to him, she uses her power to disable Mesmero and the guards. Fleeing, Magneto activates the base's self-destruct, but the X-Men and Lorna escape safely.

2nd Story: "The Crimes of the Conquistador!"
Using his captured parents as leverage, Conquistador orders Hank to steal an experimental miniature power plant from a government lab. At Xavier's school, Professor X uses the newly created Cerebro to pinpoint Hank's location. Meanwhile, with no other choice, Hank easily manages to steal the power plant and delivers it to Conquistador, demanding the release of his parent, as per their deal. However, Conquistador reneges, saying they will remain his captives until he has no further use for Hank. 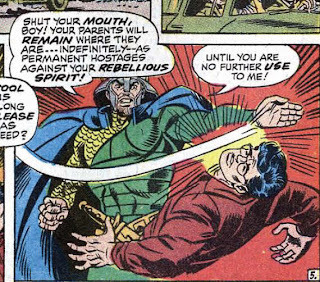 Firsts and Other Notables
Erik the Red is revealed to be Cyclops in disguise. I believe his costume is supposed to redirect his optic blasts so that they emerge from his hands (Erik's illustrated power) rather than his eyes. No explanation of where or how Cyclops received this costume is given. Shortly after the "All New, All Different" relaunch of X-Men, alien Shi'ar agent Davan Shakari will use the Erik the Red costume and identity, as will Magneto, for some reason, many decades later during the trial of Gambit.

Between last issue and this one, Iceman visited Lorna's hometown and returned with affidavits proving Magneto wasn't her father (her parents died in an airplane crash, and her father's sister and her husband raised Lorna as their own). It's revealed that Magneto simply targeted her because of their shared powers, believing she would be loyal to him if she thought he was her father. Of course, over thirty years later, Chuck Austen will screw the pooch on this whole thing by having a genetic test reveal Lorna and Magneto are related after all. 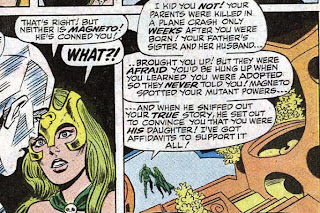 A Work in Progress
There's some dicey plotting in this one, particularly when Mesmero attacks Beast with his "mutant energy". Either someone was attempting to give Mesmero a more offensive power, or someone simply forgot what his mutant power was. 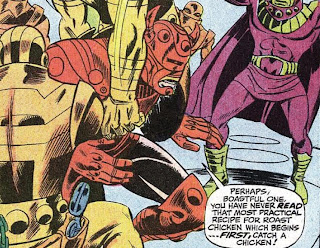 Conquistador's desire for the mini power plant (so that he'll have more mobile power for his electronic weapons) seems downright laughable in our wireless age.

At one point, Cyclops calls Mesmero and his guards the worst threat to the world since the Bubonic plague, which seems to be overselling it a bit...

Young Love
Lorna and Bobby are essentially a couple from now on. 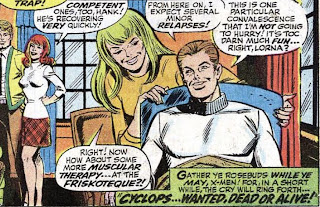 The story wraps up largely as expected, with Magneto defeated, Lorna's parentage safely confirmed, and the X-Men one big happy family again. Erik the Red turns out to be rather pointless; clearly, he was created simply to generate a cliffhanger for the last issue, as the whole Cyclops-in-disguise angle adds little to the climax. At four issues, this story definitely feels padded (and the central conceit, that Lorna would be loyal to Magneto, maniacal super-villain or not, simply because she thinks he's her father, is laughable), though its worth pointing out that with the backup story eating up five pages every month, the story works out to sixty pages, or a little less than three traditional comic book issues, a number that feels more right for a story like this.
Newer Post Older Post Home
Posted by Austin Gorton at 8:00 AM