In an effort to continue writing about current TV shows now that Lost is done and Heroes is mercifully off the air, I've decided to try a weekly "Last Week in TV" post, discussing the various shows I watched in the previous week (Sunday through Friday). Something I liked about a particular episode, something I didn't like, whatever strikes my fancy as I'm watching it. I'll do my best to avoid simply saying "this episode was good" or "that part was funny" (but don't be surprised to see me phoning it in with that kind of stuff from time to time). I probably won't talk about every show every week either. We'll see. It's a work in progress. But look for it every Monday.

Oh, and spoilers are a given.

Anyways, the traditional 2010-2011 Network Television season kicks off in earnest this week when tons of new and returning shows have their premieres, but I thought I'd warm up with a few early starters and some summer season finales that aired last week. 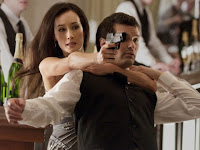 Nikita: Pilot (series premiere)
This aired last week but Mrs. Teebore and I didn't get around to watching it until this week.* Of all the previous iterations of this show, I've only seen the Bridget Fonda movie, which means I missed the much-loved TV series starring Peta Wilson to which this show will be most closely compared. As a result, I'm coming to this material a lot fresher than some other viewers and critics, though the broad strokes are certainly familiar ground (shadowy espionage agency, rogue operative, geeky tech guy, conflicted handler, etc.).

The beats are familiar, but there's some comfort in that familiarity, and it seems like there's room to grow and develop its own identity (I particular enjoyed that the show didn't start with Nikita's origin, beginning instead with her already "out" and working against Division and using the introduction of Alex as parallel to Nikita's own experiences, and the slight twist at the end was unexpected enough to be intriguing).

*Expect that to happen, from time to time, as I rarely get to see every episode of every show I watch the week it airs. Thank god for DVR.

I also like the cast. Maggie Q isn't the hottest thing walking, but she's certainly easy on the eyes and does a good job of making it believable that the relatively slight Nikita can hold her own in a fight. Lyndsey Fonesca (who plays Ted's future daughter on How I Met Your Mother and was the girlfriend in Kick Ass) IS quite hot, and I'm glad that there appears to be more to her character than the usual "troubled, angry teen gets recruited by a shadowy government agency" routine. I enjoyed Aaron Stamford, who plays the tech geek, as Pyro in the last two X-Men movies and Xander Berkley, who is playing the head of Division, is one of "those guys" who pops up in movies but you can never name him. I've liked him since he got the best death of all of Jack's bosses on 24.

At the moment, Nikita isn't groundbreaking, and doesn't offer much we haven't seen before from plenty of similar shows (even discounting the previous version of this show) but it has potential, is well cast, and the pilot was enjoyable and intriguing enough to keep me watching for a while longer.

The Venture Bros.: The Diving Bell Vs. The Butter-glider (mid-season premiere)
Volume Four of The Venture Bros. was created as one continuous season, but the decision was made after the fact to split it in two (as so many cable shows these days are wont to do). As such, this episode, ostensibly the mid-season premiere, is really just the next episode in the season's run, and lacks the big events and/or complex storytelling that constitute most Venture premieres and finales.

Which isn't to say the episode was bad, or lacking. Quite the opposite. Any episode that features a musical number in which The Monarch expresses his love his new butter-glider (think the Green Goblin's glider, but more butterfly-y) gets a thumbs up from me. I also enjoyed, amongst other things, White and Billy's debate over whether shrinking people and sending them into someone's body in order to effect treatment is cliche or classic, The Monarch giving a lung-cancer striken King Ape a carton of cigarettes as a welcome home present ("Nobody told me!"), the discovery of the old sub inside Doctor Venture ("So that's what happened to the sevens.") and Hank referring to ammunition as "gun food". 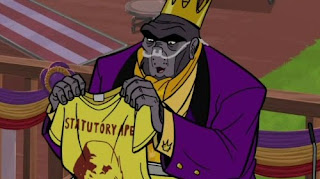 Brock: Look they live next door, what am I supposed to do?
Hunter: Wipe their pink little minds and send 'em back home like I told ya!
Brock: They discover us every other week, I can't keep doing that, it's starting to make 'em buggy. Look at this: Dean, what day is today?
Dean: Sagittarius.
Brock: Gooood. Now, Hank, what color is my tongue?
Hank: Hmmmm, it's kind of... Wednesday. Like a light Wednesday.

The Closer: Executive Order (mid-season finale)
For a police procedural, The Closer usually does a good job with its season finales, ending on a (mild) cliffhanger or tying up the (minor) ongoing plot threads (it is a procedural, after all).

This sixth mid-season finale followed in that vein, bringing to a close the ongoing half-season subplot involving the search for a new LA Chief of Police (in which Brenda competed for the job alongside her boss, Asst. Chief Pope). We all knew she wasn't going to get the job, because it would too greatly upset the show's storytelling engine (unless the producers were planning to change the name of the show from The Closer to The Chief). So the big question was always WHY won't she get the job, and who will (especially after Chief Pope failed to make the short list)?

The why was a bit fuzzy (more on that in a moment) but the who may prove to be interesting: Brenda's counterpart at the LAPD's Counter-Terrorism division, introduced in this episode and played by Courtney B. Vance (last seen playing Shakespeare's FBI boss on the late Flashfoward, and he was one of the better parts of that show). Vance's Chief Tommy Delk was shown, in the course of this episode, to be more by-the-book than Brenda but still willing to bend some rules, so it should be interesting to see how he fits into the show's overall tapestry (I'm assuming he'll be back next season, at least in some capacity). 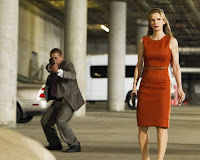 The case-of-the-week was an interesting one for The Closer, in that the audience knew by the time the teaser ended who the killer was, and by the first commercial break, so did the cops, making the story more about finding the killer and discovering what he was planning than investigating the case and producing a confession (as in most episodes).

The pursuit of the insane terrorist, who was determined to set off a bomb and kill tons of LA firemen, cops and paramedics as a blow against affirmative action, created an opportunity to introduce the aforementioned Chief Delk , and provided a rather lame reason for Brenda to lose out on the chief job: when confronting the bomber (who was wired to a dead man's switch) Brenda was forced to shoot and kill him, leading to a (routine) investigation of the incident by Internal Affairs. The implication seems to be that the mayor chose Delk because he wanted a new chief NOW and didn't want to wait for the investigation into Brenda's shooting to conclude (or didn't want a new Chief of Police taking charge while under investigation). Either way, (and I have no idea how realistic such a decision is), it was a weak conclusion to the ongoing storyline, even if we all knew that, in the end, Brenda wasn't going to be promoted to chief of police.

Parenthood: I Hear You, I See You (season premiere)
One of the (relatively) minor things that bugged me throughout Parenthood's otherwise surprisingly good first season was the fact that it seemed like Adam was either always away from work during the day, or in his office but dealing with a constant stream of family members requiring his attention, with little consequence. Apparently, the producers recognized this as well, as one of the main plots of the second season's premiere dealt with Adam's boss coming down on him for the constant time away and familial distractions.

Unfortunately, that boss is being played by one of the lesser Baldwins, William (nee Billy), and his constant awkward appearances in Adam's office were downright laughable after his complete absence last season. Still, it was nice to see my nitpick addressed, and they're clearly setting up a storyline with Billy Baldwin, so we'll see how that turns out. 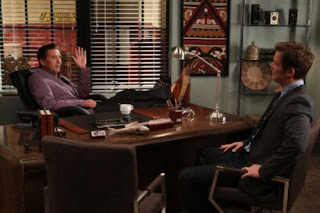 Also, one of the things this show does well is setting up a traditional family drama scenario, then subverting the expected outcome. For example, when Adam shares his sister Sarah's idea for a new shoe with his boss, I rolled my eyes as I saw the entire plot line unfold before my eyes: he takes credit for the idea, Sarah comes to work for the company, it eventually comes out that the idea was hers, not Adam's, drama ensues. Instead, Adam, of his own volition, cops to his boss that the idea was Sarah's, and later gets her an internship at his company to make up for it.

Parenthood does that kind thing a lot, and I greatly appreciate it, which is why I really, really hope that the spark we saw in this episode between Crosby and his nephew's therapist/nanny isn't setting up a cliched "Crosby reverts to his old ways and cheats on his baby-mama with the hot nanny" storyline.

Top Chef: Finale Part 2 (season finale)
Though the way the final judges table was edited made it pretty clear Kevin was the winner, if you had, at any point prior to that scene, told me Kevin was going to win, I'd have been as doubtful as he was surprised when Padma announced his name with little fanfare. Not that I mind; I'm just happy the story that seemed to be written from the first episode of this season (Angelo wins) got a twist ending. Between the two non-Angelo finalists, I probably liked Ed a bit more simply cuz he had more personality even if he could be a douche at times, but I'm happy with Kevin's victory. Frankly, I shifted fully into "anyone but Angelo" mode once Tiffany got the ax.

Though I hope Angelo does still find a way to get his Russian mail order bride into the country...

Top Chef: Just Desserts (Series Premiere)
So who wins in a fight between Padma and Gail?

Before this show premiered, I wondered if the precision and time involved in making desserts as opposed to savory dishes would alter the Top Chef format so much as to be unrecognizable, but at least as its edited, it seems to be more or less the same.

Still, I worry that the relatively limited field of competition (desserts), the effect the limitations thereof will have on the nature of the challenges (for example, they won't be able to have an open air picnic challenge, or a food truck challenge, etc.), and the constant overly-specific reference to the show as "Top Chef: Just Desserts" instead of either "Top Chef" (we know it's not the original) or "Just Desserts" (we know it's still Top Chef) will make the whole thing tiresome and unwatchable. We'll see. 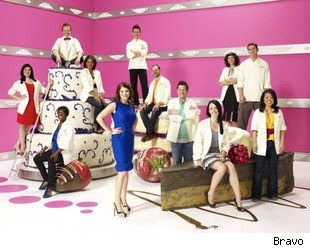