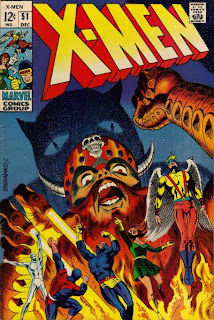 In a nutshell: The X-Men escape from Magneto while Lorna is torn between the X-Men and her father. Later, Iceman storms off.

Plot
Magneto confirms that Lorna is his daughter, and offers her a place at his side as ruler of the world. Enraged, Iceman demands Magneto tell Lorna the truth about his evil past, and the X-Men attack. Magneto orders Mesmero and his Elite Guard into the battle. Overwhelmed, the X-Men begin to retreat but the Elite Guard bar their way. Cyclops blasts the ceiling and it caves in, crushing Magneto's legs and temporarily crippling him. As the X-Men escape, Lorna digs Magneto out of the debris.

Back at Hank and Bobby's apartment, the X-Men try to decide what to do next. Worried that Iceman's loyalties are torn between Lorna and the X-Men, Cyclops takes him off the case, which triggers an argument between the two. Iceman storms off and Cyclops reveals his plan to the others. Days later, a new mutant arrives at Mutant City, calling himself Erik the Red and demanding to see Magneto.

2nd Story: "The Lure of the Beast-Nappers!"
Following another football victory, El Conquistador's men are ordered to capture Hank. After two failed attempts, El Conquistador manages to zap him into unconsciousness via his electric trident. Meanwhile, Professor X, after detecting Hank's mutant energy signature via Cerebro, sends Iceman to the McCoy home. There, Iceman finds signs of a struggle. Hank awakens to find himself a captive of El Conquistador, and given an ultimatum: work for him, or Hank's captured parents will die!

Firsts and Other Notables
Erik the Red appears for the first time. Next issue will reveal him to be Cyclops in disguise, though Chris Claremont will re-appropriate the name and costume for a different character early in his run. 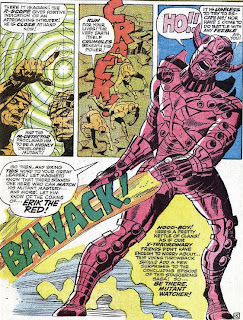 El Conquistador makes his first full appearance and gets named. He's basically a nut in a costume with gadgets and similarly-attired goons. You'll be shocked to hear that he's never heard from again after this story. 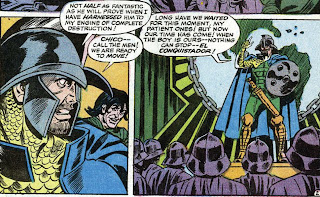 A Work in Progress
Magneto reiterates that Lorna is his daughter, though again, later stories will reveal this Magneto to be a lying robot.

Ah, the Silver Age
Magneto has already offered Lorna to RULE THE WORLD at his side, but Iceman believes Lorna will only side against him if she knows he is also a killer.

Cyclops compliments Lorna by calling her a "top-drawer item". 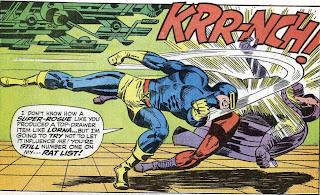 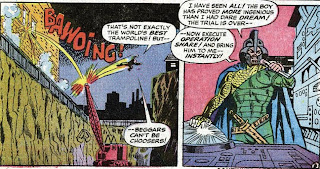 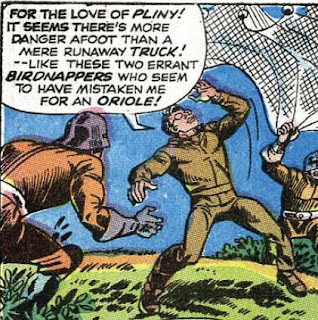 Build up your Vocabulary with Beast: Filial
adj \ˈfi-lē-əl, ˈfil-yəl\
1: of, relating to, or befitting a son or daughter <filial obedience>

As in, "Filial duty and the inner need for power! The girl has no option but to turn against us!"

Young Love
Iceman is clearly smitten by Lorna, and she returns the sentiment (awkwardly...). 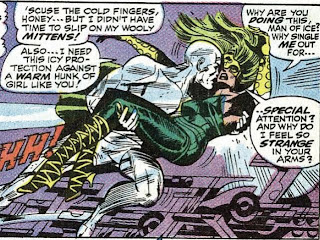 Later, Cyclops worries that Iceman's feelings for Lorna have compromised him.

The Awesome and Terrible Power of Cyclops
Cyclops matches his power directly against Magneto's for the first time. 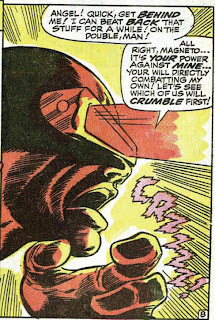 Teebore's Take
Once again, a by-the-numbers story enlivened by Steranko's art. The Iceman/Lorna attraction and Iceman/Cyclops conflict, this issue's contributions to the ongoing story, are standard Marvel stuff by now, though there's still some fun to be had in seeing the X-Men take on Magneto. There's even more (unintentional) fun in the backup story, as the Adam West-ian Conquistador puts in motion his plan to "exploit" the "awesome" power of Beast. Generally speaking, Marvel in the Silver Age managed to avoid some of the unintentional goofiness that Silver Age DC is now known for, but between Jack O'Diamonds before and now El Conquistador, these "Origins of the X-Men" backups have it spades.
Newer Post Older Post Home
Posted by Austin Gorton at 8:00 AM