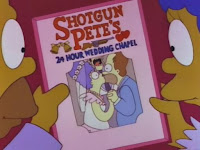 Or the One Where: Homer tells Bart and the Lisa the story of how he came to marry Marge.

The Setup: Worried she may be pregnant again, Marge goes to see Dr. Hibbert, leaving Homer in charge of the kids.

Notable Notes: This is the second "flashback" episode, chronicling past events in Homer and Marge's life. It reveals several details, including the circumstances of Bart's conception and Homer's proposal, Marge and Homer's wedding ceremony (an event which later writers are surprisingly faithful towards), Bart's birth, and how Homer came to work at the power plant.

Smithers first name is revealed to be Waylon in this episode.

Favorite Lines:
Lisa: Did you hear that, Maggie? Another baby in the house.
Bart: Oh, cool! We can race 'em!
Homer: Yeah, sure, for you, a baby's all fun and games. For me, it's diaper changes and midnight feedings.
Lisa: Doesn't Mom do that stuff?
Homer: Yeah, but I have to hear about it.

Homer: Wow, what an ending! Who would have thought Darth Vader was Luke Skywalker's father!
Moviegoer in Line: Oh, thank you, Mister Blow-the-picture-for-me. 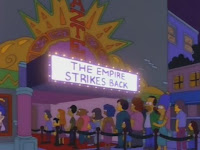 Dr. Hibbert: Well, uh, Miss Bouvier, I think we've found the reason why you've been throwing up in the morning. Congratulations.
Homer: D'oh!

Marge: Homer, I've been thinking, if the baby's a boy, what do you think of the name Larry?
Homer: Marge, we can't do that! All the kids will call him `Larry Fairy'.
Marge: Well, how about Louie?
Homer: They'll call him `Screwy Louie'.
Marge: Bob?
Homer: `Blob'.
Marge: Luke?
Homer: `Puke'.
Marge: Marcus?
Homer: `Mucus'.
Marge: What about Bart?
Homer: Let's see... Bart, Cart, Dart, Ee-art... Nope, can't see any problem with that!

Lisa: That is so sad.
Homer: Oh, come on, honey. You know how it turns out. After all, you wouldn't be here today if I hadn't become the responsible head of a household.
Bart: Hey, Homer, can we have a can of frosting for lunch?
Homer: Okay. 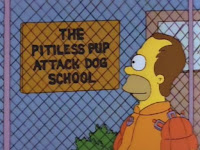 Teebore's Take
In the DVD commentary for this episode, executive producer Sam Simon says he worried that the writers were being inefficient with this episode, because each of the three stories told (Homer and Marge getting married, Homer getting his job and Bart being born) could have been extended into their own episode. To a certain extent, he's right, as this episode is crammed full of great jokes and gags, in addition to what's quoted above: Marge's pregnancy test (Barnacle Bill's Home Pregnancy test, which comes with a free corncob pipe), Dr. Hibbert's afro (changing Hibbert's hair to reflect the style of the time will become a staple of the flashback episodes), the pamphlet Dr. Hibbert gives Marge about pregnancy ("so you've ruined your life"), Homer's and Marge's casino wedding, Homer's job interview (where he answers the "what's your biggest fault?" question truthfully, and at length), the montage of Homer's various jobs set to Dolly Parton's 9 to 5, and Mr. Burns playing Pac-Man ("the hunted has become the hunter!"), to name but a few.

By now, I've absorbed A LOT of Simpsons quotes and moments into my own personal lexicon, and several come from this episode (including Homer's reaction to The Empire Strikes Back, Dr. Hibbert's pregnancy pamphlet, and the importance of testing out baby names for possible schoolyard mocking). By focusing on the sweet relationship between Marge and Homer without ever letting up on the humor, I Married Marge is a winning combination of heartfelt and humorous, and definitely one of the highlights in an excellent season.

Filled with significant details about the characters' pasts while being jammed packed with great gags. One of the best "flashback" episodes. 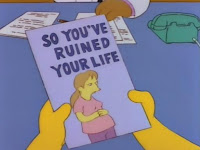