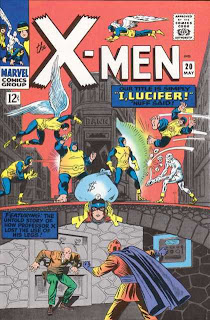 Plot: Unus and Blob, wearing X-Men uniforms, rob a bank, inciting the public against the X-Men. Meanwhile, Cyclops decides to leave the X-Men in order to find a cure for his optic blasts so that he can declare his feelings Jean while the other X-Men catch a news report of Unus and Blob's robbery. Professor X sends them into action against the pair, warning them that someone is helping out Blob and Unus, but that the same villain is affecting the X-Men's memory so they won't know who it is. That villain is Lucifer, who, after Blob and Unus faced each other in a wrestling match, convinced the pair to frame the X-Men in order to distract them. On his own, Cyclops encounters Blob and Unus robbing an armored car. They manage to convince the crowd that Cyclops is with them, and a mob quickly forms and attacks Cyclops. The other X-Men, save Marvel Girl, arrive and fight off the mob and Blob and Unus, who escape. Meanwhile, Professor X has managed to discover Lucifer's role in the affair, just as Lucifer strikes back against Xavier. Weakened and near-powerless, Professor X tells Marvel Girl of his first encounter with Lucifer and how he lost the use of his legs. The X-Men, including Cyclops, return home and Beast builds a device which blocks Lucifers attack on the Professor. The team departs to confront Lucifer, just as the villain prepares for the time of Dominus.

Firsts and Other Notables: Roy Thomas debuts as the new writer, his first regular superhero work, beginning the first of two runs on the book (the second, with artist Neal Adams, is the more well known run). Known for being a Golden Age aficionado, Thomas is one of the first of a new generation of comic book writers, ones who grew up reading comic books and approach their work from the perspective of a fan. His love of comics and knowledge of past continuity will become apparent in his work.

Lucifer returns, and his revealed to be an advance scout for an alien race, paving the way for Dominus (something which enable them to capture Earth and use it as a stepping stone to other galaxies and universes) and answering to a "Supreme One."

We learn how Professor X became injured: essentially, he was investigating a mysterious walled city some years ago, and discovered its inhabitants were under the control of Lucifer. He led them in a revolt against him and in the ensuing conflict, Lucifer dropped a heavy stone block on Xavier, crippling him. Xavier cites the threat of Lucifer as another reason he formed the X-Men

A Work in Progress: The new Cerebro is seen for the first time. It's now more computer-like, and can project images of the mutants it detects within range. 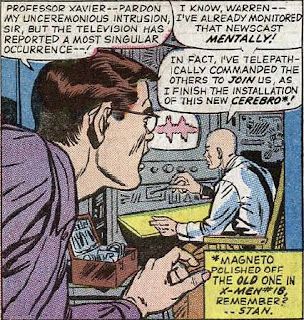 The X-Men have a new jet, purchased by Professor X before the Sentinel story and not needed until now. 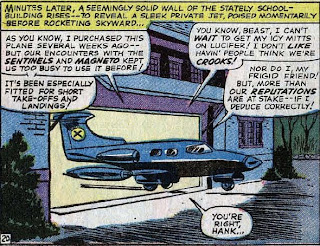 Beast mentions the ray gun they used on Unus in issue #8 (to amplify his powers such that he could no longer eat or drink through his force field). Professor X worries that he may have since found a way to counteract it.

In fact, Unus has "a hunch" that he's now immune to it. Lucifer is responsible for his immunity, and for giving him the hunch about it.

A caption refers to Iceman as Bobby Blake instead of Bobby Drake.

Call me crazy,but the X-Men probably wouldn't be in this predicament if they hadn't just let Lucifer go last time...

Ah, the Silver Age: All of the money Blob and Unus steals comes in sacks with "$" on them, of course. 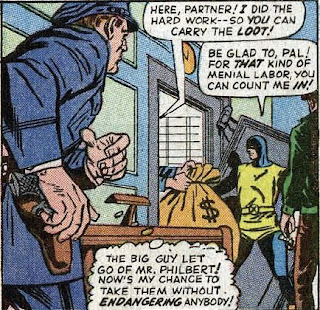 Deciding that someone must be behind Unus and Blob's partnership and smear campaign, Professor X probes his memory for who could be behind it, only to find it, as well as the memories of the X-Men is being blocked by the mysterious mastermind, so he decides he must build a Mechanical Memory-Inducer to penetrate their foe's defenses. I'm still confused as to how Professor X's memory is going to help him learn something he doesn't know... 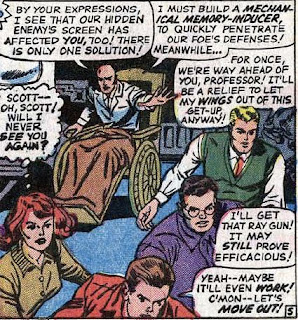 On his own, Cyclops just happens to run into Unus and Blob in the middle of a robbery.

Unus and Blob both smoke while sharing notes over coffee. 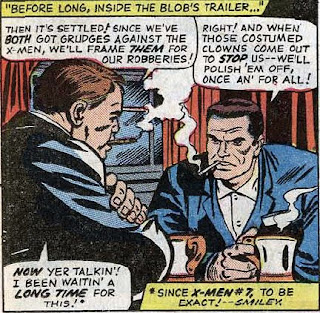 Professor X investigates a mysterious walled city in Tibet (which Lucifer was using as his original beachhead for the conquest of Earth). Tibet was apparently shorthand for a "far off, exotic place" in the sixties. It's also where Dr. Doom donned his armor for the first time and where Dr. Strange went to find the Ancient One.

Young Love: Cyclops is so in love with Jean, he's decided to leave the team in order to find a cure for his optic blast so they can be together, as he believes he has no right to feel this way about her while his eyes remain a threat. 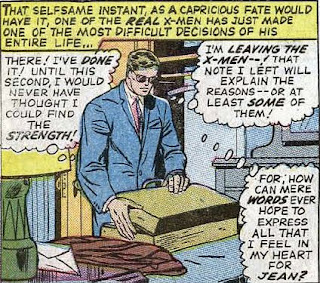 Later, after Cyclops has returned with the other X-Men, he snaps at Jean and upsets her. 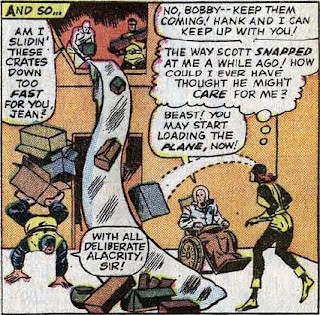 Human/Mutant Relations: Upon seeing Blob and Unus, dressed as X-Men, the public readily believes the X-Men have turned against humanity. 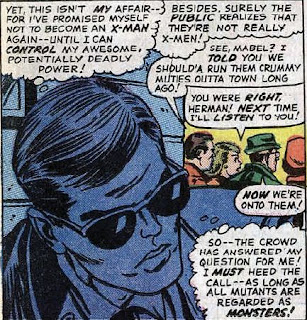 And subsequently, a mob quickly forms. 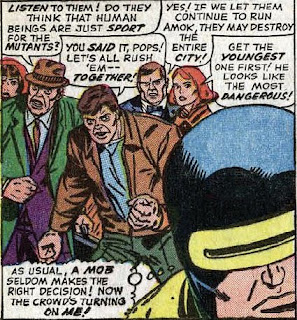 The Awesome and Terrible Power of Cyclops: Cyclops is determined to find someone who will cure him of the menace of his eye beams. 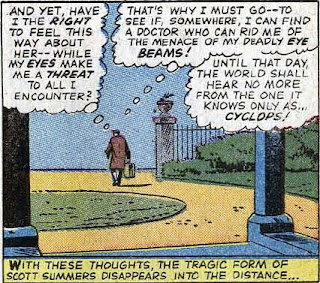 Teebore's Take: This issue is dense! There is a ton of story packed into this thing, and it continues into the next issue. Almost every panel is stuffed with either dialogue or narrative captions. Thomas, known today for dusting off old characters and for being something of a continuity buff, begins his first run on the book by bringing back Unus, Blob and Lucifer, and establishing how Professor X got injured. I mentioned it when examining issue #9, but the circumstances of Xavier's injury (randomly stumbling across the advance scout of an alien race and getting hurt fighting him) isn't exactly the stuff of epics, and had very little thematic resonance with the book (one has to wonder what, if anything, Stan Lee had in mind for this story when he introduced Lucifer and linked him to Professor X's origin).

Thomas also does something with this story that he'll do often throughout his first run: despite the presence of three former X-Men villains and a significant chunk of Professor X's origin, this feels very much like a generic Silver Age story. There isn't anything in the plot, neither the villains impersonating the heroes to besmirch their name nor the impending conquest of the planet by aliens, that has anything to do with the themes or style of "X-Men" at this point. It's been suggested that Thomas, a fresh-faced fan working on his first superhero book (and a relatively low selling title at this point), simply told the types of stories he wanted to tell, regardless of whether or not they "fit" for the X-Men. Which isn't to say this issue is bad; just more generic than some other "X-Men" stories.