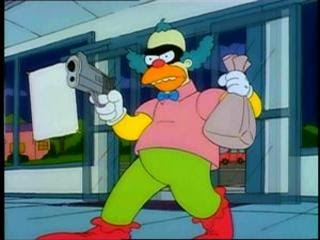 Or The One Where: Sideshow Bob frames Krusty the Clown for armed robbery

The Setup: On his way home from work, Homer stops at the Kwik-E-Mart and witnesses what appears to be Krusty committing armed robbery.

A Work In Progress: Sideshow Bob appeared briefly in the background of "The Telltale Head" but this is his first speaking appearance, and the episode which establishes most of his personality and sets up his role as Bart's archenemy, making this the first of numerous "Sideshow Bob" episodes.

Similarly, Krusty has appeared or been referenced in previous episodes, but this is the first time his character is explored in any way, including the fact that he's illiterate.

Bart's fanboy devotion to Krusty is fully established, and this is the first of numerous "Bart and Krusty" episodes. It's also the first of a handful of "Bart and Lisa team up to right a wrong" episodes, a plot later writers will lampoon on the show from time to time.

Marge: My, all this senseless violence. I don't understand the appeal.
Bart: We don't expect you to, Mom.
Lisa: If cartoons were meant for adults, they'd put them on in prime time.

Bart: Dad, you're giving in to mob mentality!
Homer: No I'm not, I'm hopping on the bandwagon! Now come on, son, get with the winning team!

Sideshow Bob: And I would've gotten away with it, too, if it weren't for these meddling kids! 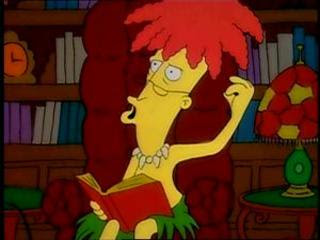 Teebore's Take: The introduction of one of my favorite characters as well as a neat little mystery in the plot makes this probably my favorite season one episode. Plus, seeing Bart and Lisa work together instead against one another is always fun. Making an erudite, eloquent Englishman (with psychopathic tendencies) the archenemy of the low-brow, uncouth, characteristically American Simpson family was a stroke a genius, and led to some of the show's best episodes.

The introduction of a classic character and the first use of several future plot tropes definitely makes this one a classic. 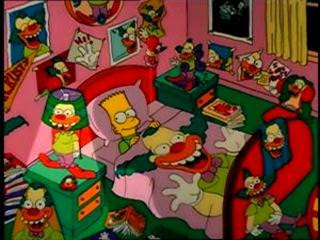