Retro Review: Bart Gets An F 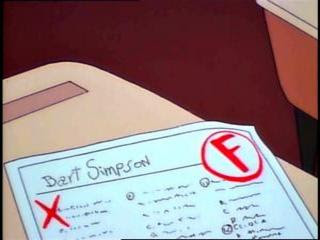 Season Twelve was released on DVD last week, but the missus and I are still making our way through season two, so I'll continue on from season one before skipping ahead to twelve.

Right off the bat, Season Two features much improved animation, thanks to a larger budget due to "The Simpsons" first season being a hit for the fledgling Fox network. The summer between the seasons was when "Bartmania" and the overall popularity of the show really took off, in which "Simpsons" merchandise sold like hotcakes and schools banned t-shirts featuring Bart saying he was "an underachiever and proud of it" and other such slogans. This growing popularity also accounts for the first appearance of high profile guest stars (something with which the show has become synonymous nowadays) this season, including Danny DeVito and Dustin Hoffman.

In the wake of that popularity, with the start of this season the show moved from Sunday to Thursday nights and was placed in direct confrontation with "The Cosby Show" and setup to serve as lead-in to "Beverly Hills, 90210". "Cosby" repeatedly posted better rating, but "The Simpsons" would, of course, outlast the older "Cosby Show" in that time slot, and remained on Thursdays nights until it moved back to Sundays for the sixth season.

Or The One Where: Bart tries anything (including studying, being tutored by Martin, and praying for a miracle) to avoid being held back and repeating the fourth grade.

The Setup: After failing yet another test, Bart is told that if he doesn't improve his grades quickly, he'll be forced to repeat the fourth grade.

A Work In Progress: A new opening sequence debuts with this episode. It is 15 seconds shorter than the original one and now features Bart skateboarding through a crowd of supporting characters. Three versions of this opening were animated: the full length one, one running 45 seconds, and another at 25 seconds, giving the shows editors much more flexibility with each episode.

This episode was the third produced for the new season but was chosen to kick off the season because it was a Bart-centric episode and the producers wanted the premiere episode to feature him. The episode lost in terms of ratings to "The Cosby Show" but finished with more overall viewings. As of 2009, it remains the highest-rated episode of "The Simpsons" and was the highest-rated and most-watched Fox program until a Minnesota Vikings playoff game in 1995.

Mayor "Diamond Joe" Quimby makes his first appearance in this episode, and Bill and Marty of KBBL radio, are heard for the first time.

Homer: Marge, could you get me another beer, please. Marge: Just a second, Homer. Lisa has some good news.
Lisa: He doesn't care, Mom.
Homer: Sure I do! I just want to have a beer while I'm caring.

Lisa: I heard you last night, Bart. You prayed for this. Now your prayers have been answered. I'm no theologian; I don't know who or what God is exactly, all I know is He's a force more powerful than Mom and Dad put together, and you owe Him big. 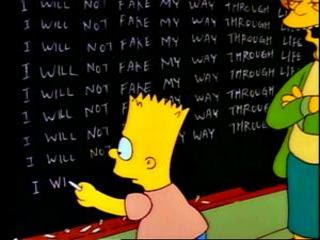 Teebore's Take: For all the talk amongst its critics, especially in the early years, of how crass and disrespectful "The Simpsons" is, and how much of a bad influence it is on kids, Lisa's dicussion with Bart about the nature of God and prayer as seen through the eyes of a child (one of my favorite "Simpsons" quotes) is an early indication of the kind of high-brow philosophical, religious and cultural dialogue the show is capable of having with its audience at the same time it's making a joke about John Hancock signing his name in the snow with his pee. As the years go by, "The Simpsons" will continues to develop and define that balance between low-brow humor and high-brow social commentary that so engages its fans and enrages its critics.

Manages to both embrace and repudiate Bart's "underachiever and proud of it" philosophy; a solid start to the second season. 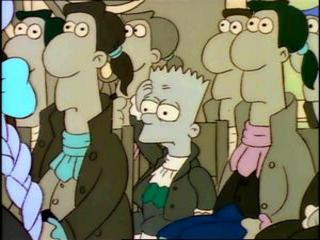