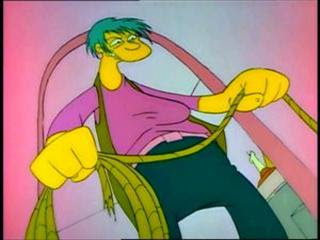 Or The One Where: Marge and Homer spend an evening out while Bart and Lisa tussle with the Babysitter Bandit.

The Setup: Feeling unappreciated at home, Marge is enraged at Homer until he surprises her with a night out.

A Work In Progress: While it aired as the last episode of the first season, this was the first episode ever produced for the show. When it came back from being animated, the animation was so shoddy the producers arranged to have the premiere of the show pushed back so they could revise it, and instead of the planned debut in the fall, "The Simpsons" first appeared in December with the Christmas episode "Simpsons Roasting on an Open Fire." As a result, this episode has some rough edges in places where the original animation conflicts with the revised animation.

Barney's hair is blond in this episode, and Moe's is black instead of gray. Moe was originally voiced in this episode by Christopher Collins before being overdubbed by Hank Azaria. Collins also provided the voice of Mr. Burns in "Homer's Odyssey" (before Harry Shearer took over the role), and was the voice of Cobra Commander and Starscream.

Bart: You know what happens. They find Captain Quick's treasure. All the elves dance around like little green idiots. I puke. The End.
Lisa: Bart, you're just like Chilly, the elf who cannot love.

Bart: We know who you are, Ms. Botz. Or should I say, Ms. Botzcowski. You're the Babysitter Bandit.
Ms. Botz : You're a smart young man, Bart. I hope you're smart enough to keep your mouth shut.
Lisa: He isn't.

Marge: The way I see it, if you've raised three children who can knock out and hog-tie a perfect stranger, you must be doing something right. 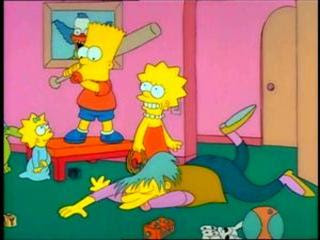 Teebore's Take: While the original animation might have been rough, the script is solid, showing from the beginning the writers' ability to blend the traditional sitcom with the zany and outrageous. This is the third episode this season which deals in some part with Marge's anger towards Homer (alongside "Homer's Night Out" and "Life in the Fast Lane"), which suggests that if the writers were out of ideas for a Bart story, a Homer/Marge conflict was their fallback option.

Which is interesting, considering how many plots these days revolve around the idea of "Homer and Marge's marriage is in trouble because of X." While the examples of such plots from the first season aren't nearly as over the top as later examples, it's interesting to note that the Homer/Marge marital conflict episodes have been part of the show's foundation since the beginning. Which isn't meant to excuse the dearth of such (mainly poor) episodes of late; it's merely an interesting observation that even back in the beginning, roughly 25% of the episodes dealt with trouble between Homer and Marge.

A solid outing and a template for what's to come, especially impressive for being one of the earliest episodes produced.

And with that, the first season comes to a close. My personal recollection of the first season has always been "crude animation and funny, but not spectacular, episodes." Perhaps my memory does the season a disservice, for while the animation is still rough around the edges, and the episodes are more solid than they are spectacular (in particular, lacking the laugh out loud lines later seasons will be known for), I enjoyed these episodes far more this time around than I have in the past.

Aside from a couple of clunkers, one boring ("Homer's Odyssey"), the other a victim of mis-characterization ("There's No Disgrace Like Home", though it can be excused somewhat for being the first episode written), the episodes settle into a comfortable group ranging from the good ("Call of the Simpsons, "The Telltale Head") to the great ("The Crepes of Wrath", "Krusty Gets Busted"). As a whole, the season is alot closer to what the show will become than I often think. 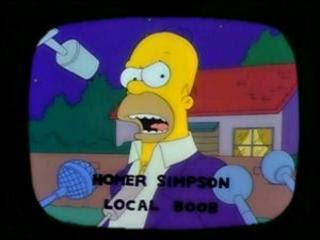