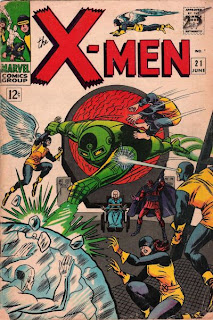 Plot: On their way to Lucifer's headquarters, the X-Men see a strange beam of light emanating from the top of a mountain. It is a teleportation beam, sending Lucifer the components of Dominus and a group of robots. The X-Men leave Professor X with the plane and try to find a way into Lucifer's mountain base. Along the way, they tussle with a sheriff and his posse, attracted to the scene by the lights and attempting to arrest the X-Men because they heard about Unus and Blob's crimes back east. After fighting off the group, the X-Men are sucked underwater by a massive whirlpool and find themselves in Lucifer's base, where they are quickly captured by his robots. Meanwhile, Lucifer has abducted Professor X. Xavier is unable to penetrate Lucifer's mental shields. Lucifer explains that Dominus is an advanced super-computer constructed by his race capable of projecting a beam that will render all humans on Earth docile and unable to resist their subjugation by Lucifer's race. The robots are the only ones capable of running Dominus effectively. The X-Men escape and make their way to Professor X, who warns them to ignore Dominus and focus on the robots while he manages to telepathically influence Lucifer to order the robots to attack the X-Men recklessly. This gives the X-Men the upper hand and they manage to destroy the robots. With Dominus now useless, Lucifer is banished by his superior to a nameless dimension where neither time nor space exist for his failure, and the superior removes the damaged robots and the useless Dominus from Earth. The X-Men depart, having saved the planet from conquest by a race whose name they don't even know.

Firsts and Other Notables: Lucifer pops up a few more times after this in other books, and his race gets used every once and a while, but for the most part, this is the last time Lucifer is featured prominently as a villain (incidentally, his race, unnamed in this issue, will eventually be revealed as the Quist in the Official Handbook of the Marvel Universe #5).

A Work in Progress: The X-Men use a "Go Buggy" after exiting their plane. 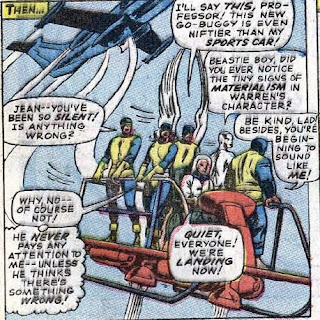 Professor X says it's been a decade since his original confrontation with Lucifer. I'm not entirely sure why it took Lucifer ten years to prepare for the arrival, via teleportation, of a super-computer and robots.

Thomas cranks up the angst a bit in this issue when the team begins to fight amongst themselves in the middle of their battle against Lucifer's robots. When they receive Professor X's telepathic order to ignore Dominus in favor of the robots, everyone except Cyclops and Marvel Girl believe the telepathic voice is Lucifer's, trying to trick them into leaving Dominus alone (apparently telepathic voices aren't as distinctive as vocal voices). It goes as far as Cyclops blasting Angel at one point, in order to stop him from damaging Dominus. 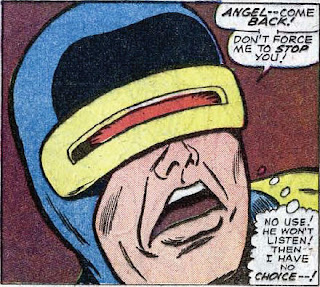 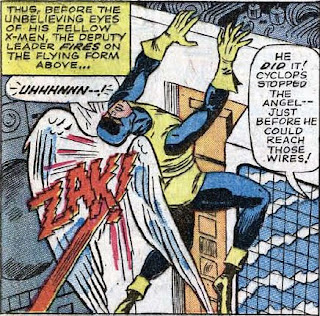 The whole notion of a team fighting amongst itself as often as it fights villains was pioneered in Stan Lee early on in "Fantastic Four" but aside from some gentle ribbing amongst themselves, it hadn't really been seen in "X-Men" before this.

The X-Men are imprisoned in a "cosmic-crystalline cube", a prison whose transparency enables the X-Men to see the exact lever they need to pull to release themselves, something Marvel Girl can easily do telekinetically. 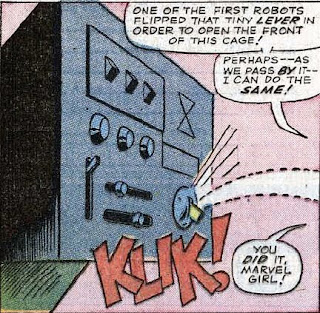 Later, Marvel Girl more or less takes Lucifer out of the fight by telekinetically pulling his cape over his head. 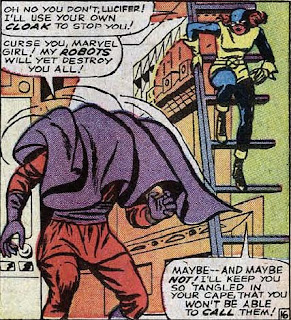 Lucifer's plan doesn't make a lot of sense. Last issue he was preparing for the arrival of Dominus and it's helper robots while simultaneously luring the X-Men to him by using Blob and Unus to frame the X-Men. By the time they are captured in this issue, Dominus has arrived and is in place. So why lure the X-Men to him in the first place? And why not just turn Dominus on, instead of capturing Xavier and the X-Men?

And of course, Lucifer monologues the details of his plan to a captive Xavier, telling him exactly what he needs to know to defeat Lucifer.

Build up your vocabulary with Beast: Perspicacity /ˌpɜr

As in, "on occasion, my snowbound sidekick, your frigidity is equaled only by your perspicacity."

For Sale: Before handheld video games, there was... 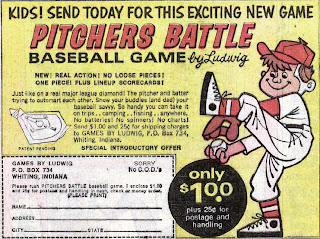 Teebore's Take: Essentially an issue long fight scene reminiscent of parts of the Sentinel issues (the X-Men fighting and captured by robots only to escape their Silver Age-y prison) that seems disconnected from the first part of the story. Remember Unus and the Blob, and how they framed the X-Men? That plot thread goes largely unmentioned here, and as mentioned above, Lucifer's plan in using them to lure the X-Men to him is questionable, at best, now that we know exactly what Dominus does and what Lucifer's ultimate goals are.

Meanwhile, Roy Thomas continues to put his own stamp on the book by continuing to introduce more soap opera elements to the stories (as he did last issue with Cyclops' departure) by having the team fight amongst itself in classic Marvel fashion.