To Better Know A Hero: Snake-Eyes 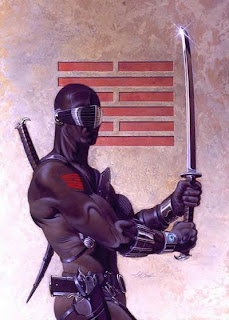 Nicknames and Alias: The Silent Master

He is also, apparently, highly immune to radiation.

Weaknesses and Achilles' Heels: Snake-Eyes is mute and for a period of time, his face was horribly scarred and disfigured.

Gadgets and Accessories: Proficient in all NATO and Warsaw Pact arms and various ninja weapons; when disfigured, he would sometimes wear advanced rubber masks to disguise his features when in public and out of his usual uniform.

Friends and Allies: Timber (his pet wolf), Scarlett, Storm Shadow (at times), Stalker, Kamakura (his apprentice), the Soft Master, General Hawk and the rest of the G.I. Joe team. 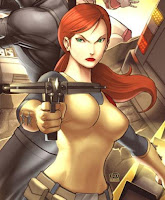 Foes and Antagonists: Storm Shadow (at other times), Zartan, Firefly, Cobra Commander, Destro and the rest of Cobra.

Movies and Appearances: Snake-Eyes has appeared in nearly all incarnations of G.I.Joe since his creation in 1982, including the original "Real American Hero" cartoon and the more recent "Sigma Six" and "Resolute" toons. Ray Park (of Darth Maul fame) plays him in the recently-released live action film. 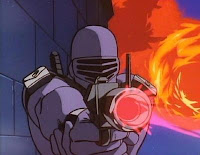 One Sentence Origin: After several tours of duty in a Long Range Recon Patrol in Southeast Asia (alongside Stalker and Storm Shadow), Snake-Eyes trained as a ninja before joining the G.I. Joe team and, in one of their earliest missions, damaged his face and vocal chords rescuing Scarlett from a crashing helicopter, leading him to adopt the silent visage of Snake-Eyes.

Memorable Moment: G.I. Joe (vol. 1) #21 March 1984: In the famous "silent" issue (in which the story is told without dialogue, captions, or sound effects), Snake-Eyes singlehandedly infiltrates Destro's stronghold to rescue a captured Scarlett, and faces off against Storm Shadow for the first time. 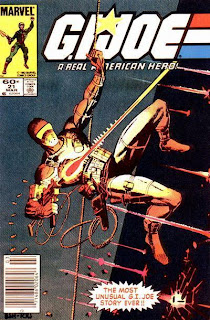 Fun Fact: Larry Hama, who wrote almost every issue of the Marvel G.I. Joe comic book series, also wrote all of the filecards found on the back of the G.I. Joe action figure cards.

Teebore's Take: Without a doubt, Snake-Eyes is to the G.I. Joe comic book story what Wolverine is to the X-Men: that dark, mysterious character nearly everyone knows and loves. In many ways, the entirety of the comic book series is Snake-Eyes' story (especially towards the end of the Marvel series, where his name was featured larger than "G.I. Joe"): the mythology and back story of the character form the spine of the overall G.I. Joe narrative, with numerous characters, both good and bad, tying back to him in some way.

In addition to (or as a result of) his popularity in the comic book, Snake-Eyes remains the most popular and bestselling action figure of the entire line, with several dozen different figures released through the years.

Of course, in the cartoon, Snake-Eyes was, at best, a minor character, appearing in the background of many episodes and featured in only a few (even his relationship with Scarlett was usurped by Duke on the show). Whether this was because the writers of the cartoon didn't hold the same affection for the character as Larry Hama, or because the things that could be done with a mute ninja on a TV show that had to keep the violence from being too realistic were fairly limited, is unknown. It will be interesting to see what kind of a role the character has in the live action film, still hampered by his lack of dialogue but able to cut loose a bit more in terms of action. 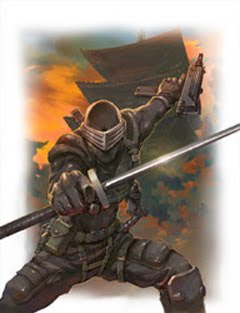