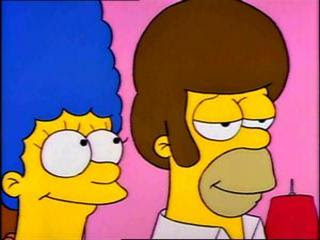 Or The One Where: Homer becomes a successful executive at the power plant after regrowing his hair.

The Setup: After hearing about a "miracle breakthrough" in hair regrowth, Homer defrauds his company health insurance to pay for the treatment and grow a full head of hair.

Homer: And what does my little girl want?
Lisa: An absence of mood swings and some stability in my life.
Homer: Uh... How about a pony?

Karl: You don't belong here. You're a fraud and a phony, and it's only a matter of time until they find you out.
Homer: Gasp! Who told you?
Karl: You did. You told with me with the way you slump your shoulders, the way you talk into your chest, the way you smother yourself in bargain-basement lime-green polyester. 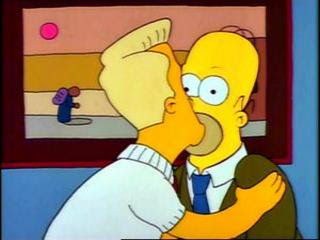 Teebore's Take: This has always been one of my favorite episodes, though I've never been entirely sure why. Homer's mysterious assistant, voiced with vigor by Harvey Fierstein, certainly has something to do with it. Karl, with his inexplicable devotion to Homer, is one my favorite "one shot" characters and Fierstein's performance definitely lifts this episode. Plus, it's an early enjoyable Homer-centric episode that's played relatively straight and manages to be funny without devolving entirely into slapstick buffoonery.

A solid Homer episode, and a personal favorite. 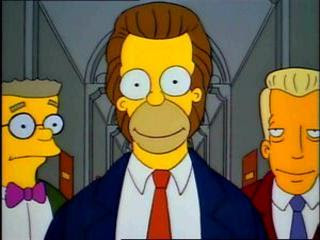