X-amining Logan: Path of the Warlord #1 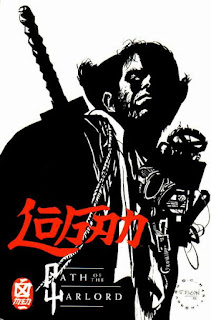 In a Nutshell
Years in the past, Wolverine helps Chang of Landau, Luckman, & Lake stop the invasion of Earth by an extra-dimensional warlord.

Plot
Years in the past, Logan is working for Landau, Luckman & Lake. He is tasked by Chang with rescuing Dr. Carling from a warlord named Kimora. Ultimately, Kimora bests Wolverine in a fight, but is beheaded by Carling. A few years later, Logan is learning the way of the samurai as a means to control his more bestial side when Chang tracks him down. Chang reveals that Kimora is alive and has re-captured Carling, prompting Logan to join Chang in rescuing him again. Chang informs Logan that Kimora is from another dimension, and hopes to use Carling's research to send his armies to conquer Earth. Together, they travel to Kimora's dimension, and meet up with Rose, Carling's now-adult daughter. The trio make their way to Kimora's castle, fighting his shadow assassins along the way. Inside Kimora's castle, they confront the warlord, who kills Carling, triggering the animal inside Wolverine. He fights his way to Kimora, but Rose helps him regain control before killing him. Instead, they use Carling's device to trap Kimora in a dimensional rift. Logan, Chang & Rose return to Earth, and Chang offers Logan a role as Rose's partner working with Landau, Luckman & Lake once more. Logan says he'll consider it, affirming that he needs to start changing the way he looks at the world.

Firsts and Other Notables
This is a double-sized prestige format one-shot with a cardstock cover, featuring one of the by now numerous tales from Wolverine's past, with this one set roughly in the late 40s and early 50s (following his years in World War II but before he fell in with the Canadian secret service and Team X).

As is usually the case with these kinds of one-shots, it features a bunch of characters and place we never see again, including the villain, Kimora, and his extra-dimensional realm, unnamed here but later called Kageumbra (a portmanteau of the Japanese & Latin names for "shadow") in a Marvel Handbook entry. Unlike most of these kinds of one-shots, it does include some actual recurring supporting characters, including Chang, the head of Madripoor's Landau, Luckman & Lake office who was introduced (and killed) in Wolverine #5 and Rose Wu, the shape-shifting one-time proprietress of the Princess Bar, killed in Wolverine #98, whom that same Handbook entry confirmed Rose Carling in this story to be (with "Wu" being her later married name). 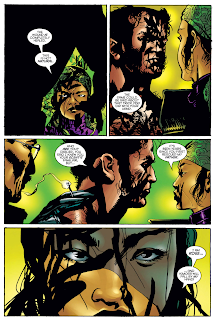 For some reason, the final page of this story is presented in black-and-white and printed on the inside back cover.

A Work in Progress
Landau, Luckman & Lake's later reliance on extra-dimensional travel is setup here, as the group is working with Dr. Carling, an expert in the field, and uses a rudimentary warp chamber to send Logan & Chang to Kageumbra 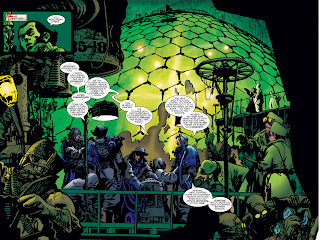 Austin's Analysis
Once upon a time, when I was reviewing every issue of X-Men at a point in the series' publication history when there was only one X-book, I had to decide whether or not to I would eventually expand my project to include ALL the various spin-offs, one-shots, and add-ons that would come to encompass an entire line of X-Men comics. When considering that question, this particular issue came to mind. My initial impulse was, of course, to review everything X-related. But I stopped myself for a moment, and made sure I realized that if I was going to cover everything, that meant everything, including all the bizarre, random one-shots released through the years, most starring Wolverine, especially that weird quasi-samurai one from the mid 90s that seemed to come out of nowhere and do nothing relevant or interesting with the character (aka this issue). Of course, I ultimately accepted that reviewing this issue and ones like it was the price of doing business, but this issue nevertheless briefly gave me pause, and may have led to very different X-aminations project (though in that world, I'd probably have completed my review of every issue of Uncanny X-Men, and just Uncanny X-Men, by now).

Reading it now, especially in the wake of the Archangel one-shot, it feels less worthy of its status as the issue which, however briefly, threatened the integrity of my mission. This issue is by no means a good, necessary, or terribly intriguing one, but it's not abjectly awful or anything. It's certainly better than that Archangel story, at the very least, lacking amongst other things that issue's pseudo-Vertigo pretensions and failing to match or exceed its level of "where did this come from?". This is, instead, much more akin to the average Wolverine one-shot, a seemingly-endless subsection of Wolverine stories which are rarely memorable or engaging, but manage to do their job of giving people who really love seeing Wolverine do Wolverine things the chance to pay Marvel an extra few bucks for another taste of what they love, often times in a slightly bigger package or with a unique/marquee artist at the drawing board.

Like those earlier one-shots, this one features the usual tough-guy inner voice established by Claremont & Miller in the first Wolverine mini, an ongoing struggle between Wolverine's rationale and bestial sides, vague hints about his past, and interactions with characters who seem important but will never be seen again. Specially, this issue is a little bit like Wolverine: Killing by way of Rahne of Terra, with Wolverine crossing dimensions & unleashing his inner beast to stop an extra-dimensional warlord from invading Earth. John Paul Leon's art, despite its dark, cluttered, quasi-Sienkiewiczian look, is fairly easy to follow from a storytelling perspective, and Mackie, who rarely reaches highter than "bog-standard superhero story", peppers in enough little bits like Chang & Rose and the development of Landau, Luckman, & Lake to give it a small dash of narrative relevance (especially when read in close proximity to Wolverine #98). So by no means a classic, or anything I'd ever feel compelled to revisit, but certainly not the worst thing I've read in the history of this project, or even the worst Wolverine one-shot I've read, or even the worst thing I've read that was published in this month.