Until now Joe's had it easy,
But now it's gonna get real hard
Cobra's hired evil twin brothers
Leaders of the Crimson Guard
They're double twins so much the same
If one's in trouble the other feels pain
The Crimson Guard is the most dangerous foe
of G.I. Joe A Real American Hero

Okay, perhaps the worst of the song lyrics so far. Silly rhymes, and maybe the lamest attempt at overselling the newest menace yet. Proclaiming the heroes have "had it easy" in their previous adventures, but now it's "gonna get real hard" because they're facing two gymnast twins feels just desperate. And, sheesh, "gonna get real hard" -- was this written by a scrappy ten-year-old in 1957 with a slingshot in his backpocket and bullfrog hidden in his bindle that he's going to use to scare off Bessie Lou whenever she comes around? 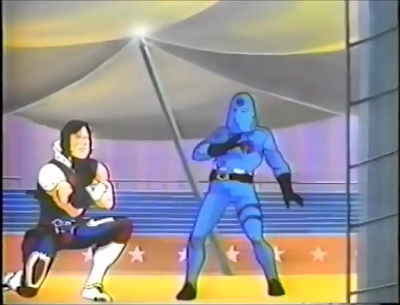 The Crimson Twins don't officially debut until "The Further Adventures of G.I. Joe" (the five-parter that opened the daily show in 1985), so this is likely the first time kids were exposed to the characters. Michael Bell is already cast as Xamot, but Tomax doesn't speak in the ad. (He'll be portrayed by Corey Burton a few months later on the show.) 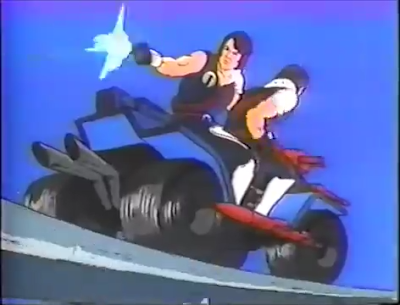 Their central gimmick, that they feel each other's pain, is brought to the forefront immediately, literally in the first second of the ad. I've always enjoyed that bit, although it's perhaps a cruel joke to play on a kid...I genuinely believed as a child that this was a real experience between twins. 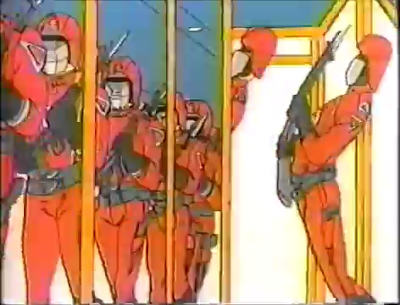 Aside from introducing Tomax and Xamot, we also see the Crimson Guard for the first time in animation here. In the comics, Hama seems to have little affection for the twins, but he sure loves the Crimson Guard. They're still appearing to this day, either infiltrating corporate America or the political realm. The brief flash of businessmen transforming into the Guard through the funhouse mirrors is a cute touch. (There actually is a scene in the issue featuring the Guardsmen in a hall of mirrors, though they were incorrectly drawn as H.I.S.S. tank pilots in this appearance.)

The previous commercial (originally attached to issue #30, but so nice Hasbro used it for a later comic as well) was possibly the finest looking one to date. This one is not quite to that level, but it looks decent. Likely the closest we've come so far to the true look of the cartoon. In fact, I could swear that shot early on of Flint leading the charge of attacking Joes was later recycled for the cartoon.

Speaking of Flint, you only see him from the back on the comic cover, but it's becoming evident by now that he's the new golden boy of the team. Most of the 1985 Joes never received their fair share of attention from Hama in the comic, but he didn't seem to have a problem using Flint on a semi-regular basis. In the animated series, meanwhile, Flint is clearly meant to be the star of the show once the daily series begins.

It's become a part of the lore that Flint was named after animation writer Flint Dille, who worked on some of the earliest episodes. Dille recently stated he's not entirely sure this is true, but he did say that people at Sunbow used Flint to persuade him to take a job on the daily series, claiming (seemingly as a joke) they'd named a character in his honor. 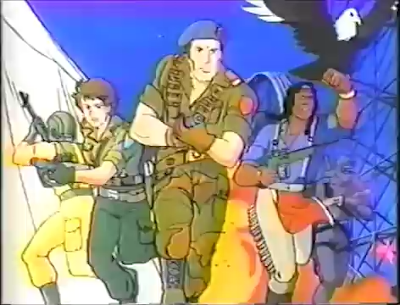 To be honest, looking back, it's hard to articulate just what makes Flint so special on the show. People like his relationship with Lady Jaye, and the character design is cool, but...why is Flint specifically the Joe you're supposed to care about? His established personality from the comics and action figure dossier has him as a gruff intellectual who doesn't relate well to others, but this didn't translate at all to the small screen. The cartoon's Flint is serious, heroic, and free of the quirks that defined many of the other Joes. I suspect much of the affection for Flint comes from Bill Ratner's performance on the animated series, which had a friendly yet tough tone to it that spoke to kids. (You can check out an interesting interview with Ratner over at the Who Did That Voice? Youtube channel.)

Over the years, Hasbro seems to have settled on the idea of Duke as the face of the franchise, nudging Flint into the background. During the early production of the Joe live-action film, Hasbro and Paramount pursued Mark Wahlberg for months to play Duke...in spite of the fact he'd be far more appropriate, physically, as Flint. 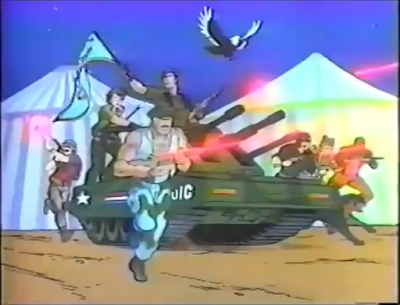 By the way, the closing shot of the team in the commercial just looks goofy. Why is Flint waving a flag? Someone hand that Warrant Officer a laser rifle! What's on that thing, anyway?

If you'd like several thousand more words from me on the Sunbow G. I. Joe continuity, check out the novels I wrote for Kindle Worlds over on Smashwords. But, more importantly, I have a new paranormal novel available for preorder right now...for just 99 cents! What happens when a cocky psychic is trapped in the afterlife with the ghosts he's chased? Find out in Love is Dead(ly)!
Newer Post Older Post Home
Posted by G. Kendall at 3:30 AM