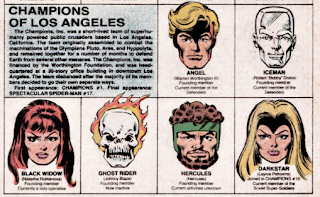 Concluding our coverage of The Champions, here's a trio of Top Five lists highlighting some of the highs and lows of the series. Check back next week for an announcement on the next Patreon review series!

While Iceman was a reliable source of ice slides, walls, and projectiles in fight scenes, outside of that, he did mostly one of two things throughout the series: moon after Darkstar, or think about how he was going to be quitting the team soon (any day now, for reals, totally...).