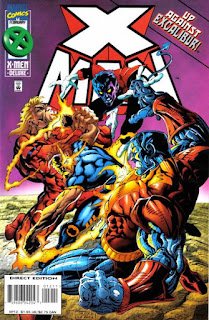 Plot
Following Rogue's advice, Nate arrives on Muir Island, and is immediately attacked by a suspicious Excalibur. Moira calls them off, however, and proceeds to run a series of tests on Nate. Elsewhere, Mr. Sinister contacts Threnody and asks if they have any data on Nate Grey; she feigns ignorance, but actually believes that Nate will be her ticket to escaping Sinister. On Muir Island, Moira confirms Nate does not have the Legacy Virus, but finds some odd readings she wants to examine further. In the meantime, Nate spends some time with Wolfsbane. Later, Moira discusses her findings with Xavier: Nate's immense power is burning out his body, killing him. Meanwhile, Nate is drawn to the cell where Spoor is being held, and while he is able to tell Spoor is not being entirely truthful about his claims that Muir Island is place of mutant experimentation, he nevertheless grows suspicious. He proceeds to confront Moira in her lab, and when he reads her mind, is alarmed by the news of his impending death and the fact that she was reporting on him to Xavier. Outside, Colossus & Nightcrawler are stunned when Moira's lab suddenly explodes.

Firsts and Other Notables
Part of a crossover (the old-fashioned, non-event kind) with Excalibur, the story begun here continues directly in Excalibur #93.

This issue establishes that the sheer volume of power at Nate's disposal is burning out his body, which is the cause of his seemingly random drops in power and nosebleeds (Moira predicts that he won't live much past the age of 21 at this point). This introduces a whole new level of angst to the series, and becomes something of a running plot point for awhile, as Nate grapples with his mortality and balancing using his power with the fact that doing so quickens his own demise. 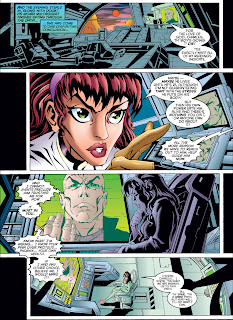 Threnody, the young homeless mutant with the ability to sense the dead or dying (and harvest their "death energy") who was taken in by Mr. Sinister in X-Men #27, pops up here briefly, plotting to find Nate and use him to help her escape from Mr. Sinister (Mr. Sinister is away, due to the events of Cable #26-28). This is the kickoff to a pair of runs in which Threnody will serve as a recurring love interest for Nate/supporting character in the series, from here up through issue #25 and again after issue #50. 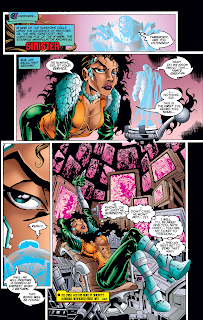 The terrorist attacks in London which prompt the Misunderstanding Fight between Excalibur & Nate  at the beginning of the issue are a reference to Incredible Hulk #437 and a story in which a mysterious group called "the Alliance" is carrying out various attacks (the Alliance turns out to be a front for the Leader). 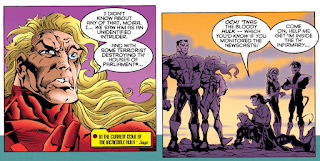 A Work in Progress
Much to her concern, Nate reminds Moira of her own son, Proteus, as both are young mutants with massive, hard-to-control powers that threaten their physical bodies.

Nate is able to use his telekinesis to bend the lasers of a security grid around his body so as not to trip them. 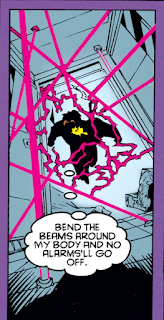 Young Love
Wolfsbane finds Nate easy on the eyes (she is unaware at this point that he is essentially a younger version of her former mentor Cable). 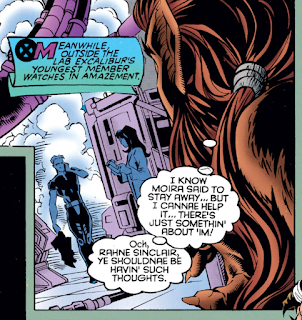 Austin's Analysis
In some ways, this issue is a refreshing change of pace in terms of Nate's characterization: for once, he's not a petulant brat, lashing out at the world around him. He gets over Excalibur's ill-advised assault on him in the opening pages quickly (which, frankly, makes Excalibur look like the kind of jerk Nate usually is), allows Moira to run comprehensive tests with minimal objections, and is downright charming (or at least personable) to Wolfsbane. Ironically, this means he's essentially being written *out* of character for most of the issue, relative to his previous appearances, but it's a welcome change, nevertheless. And, just in case anyone is worried Nate has turned a corner, by the end of the issue, he's back to acting impulsively on incomplete information delivered by untrustworthy sources (Nate only being able to sense that Spoor isn't telling the whole truth and not that he's a manipulative villain seems like a pretty big copout for someone the narration refers to earlier in the issue as the most powerful psi on the planet) in order to trigger another forced conflict with Excalibur, the better to extend this little crossover to another issue.

Next Issue
Next week: Bishop fights Fatale in X-Men (vol. 2) #49, Boomer gets a makeover in X-Force #51 and Wolverine returns to Madripoor in Wolverine #98!